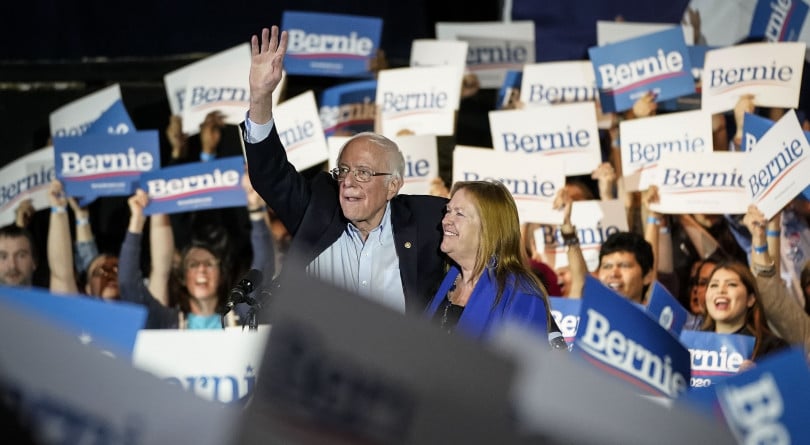 Democratic presidential candidate Sen. Bernie Sanders and his wife Jane Sanders wave as they exit the stage after winning the Nevada caucuses during a campaign rally at Cowboys Dancehall on Feb. 22 in San Antonio, Texas. (Drew Angerer/Getty Images)

And the machines didn’t break: In Saturday night’s Nevada caucuses, the Democratic party establishment may have been walloped when Bernie Sanders easily won, but at least they could console themselves that there wasn’t a second Iowa-style disaster with the state party’s vote-reporting software: though votes were reported slowly, they were reported without any major problems. Entrance polls also went smoothly enough to show that Sanders built his win on at least two main (overlapping) pillars: young people, always the core of his support, and Latino voters, the object of massive outreach and turnout efforts by the campaign:

Entrance poll data showed that Sanders overwhelmed his rivals among the state’s youngest caucusgoers, capturing the votes of two-thirds of those aged 17 to 29. The Vermont senator was also the clear favorite of Latino Democrats, winning about half of their votes.

Nicole Narea in Vox has a more in-depth look at the campaign’s Latino outreach efforts and notes that the candidate’s Medicare-for-all plan might have had special appeal: a Univision poll revealed that “a quarter of Latinos nationwide see lowering health care costs was the most important issue facing their community, and 83 percent support Medicare-for all.”

Jim Clyburn for Joe: The make-or-break primary for Joe Biden is the South Carolina primary on February 29, the last stand-alone primary before Super Tuesday. To help him shore up his support there, he will receive the endorsement of an old friend, South Carolina Congressman Jim Clyburn, the current House Majority Whip. According to Politico, some Democrats see South Carolina as “a last-ditch effort to blunt Bernie Sanders’ momentum before he runs away with the nomination.” Biden has been ahead in the polls there on the strength of his popularity with older African American voters, but both Sanders and billionaire Tom Steyer are gaining on him: appearing on Face the Nation, Biden blamed Steyer’s South Carolina ad spending for the drop in his polling numbers there. “I think a lot’s happening in terms of the amount of money being spent by billionaires to try to cut into the African American vote,” he said.

Marianne Williamson for Bernie: Sunday brought more good news for Sanders as he landed the endorsement of former Democratic primary candidate Marianne Williamson, the self-help author and frequent Oprah guest whose New Age spiritualism gained her a cult following during the early debates. Williamson dropped out of the race in January, but made a surprise appearance at a Sanders rally in Austin, Texas to announce that Sanders is her choice: “And now it’s time, I’m here and you’re here, because it’s time for us to take a stand with Bernie.” Williamson had previously been seen as a supporter of Andrew Yang, the other unconventional cult candidate, but never endorsed him officially.

Sanders vs. MSNBC, cont.: It’s no secret that some of the hosts and panelists at MSNBC are not fans of Bernie Sanders. And, in return, Sanders and his surrogates make it known that they don’t care for the treatment they get at the network. The media gossip site pagesix.com reported that Sanders confronted two NBC news executives before the Nevada debates (which NBC moderated), accusing them of unfair treatment and doubting that the debate questions would be fair. MSNBC’s most vocally anti-Sanders host is longtime Hardball headliner Chris Matthews, who, after Sanders won Nevada, compared Sanders’ takeover of the Democratic party to “The fall of France in 1940.” You will not be surprised to hear that Sanders fans didn’t care for that one.