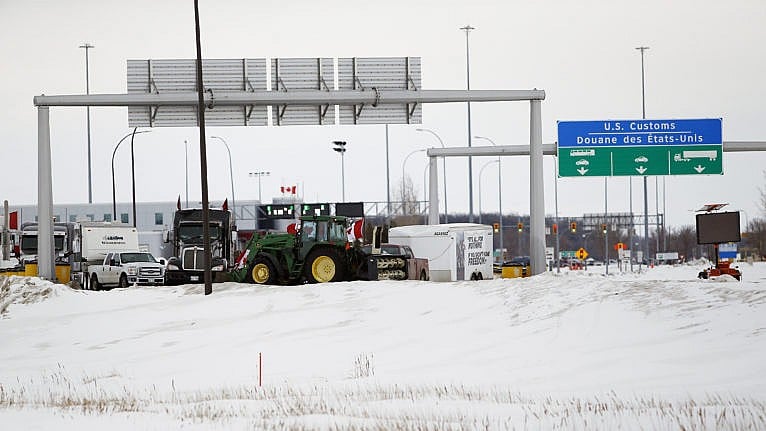 The White House said Thursday the U.S. federal cabinet and senior administration staff are now seized with this issue. “[They] have been engaged around the clock to bring this to a swift end,” the White House said in response to questions from CBC News. The administration of U.S. President Joe Biden said Homeland Security Secretary Alejandro Mayorkas urged his Canadian counterparts Thursday to use their own federal powers to end the blockade at the Canada-U.S. border.

Gone to court: The blockade has caused shutdowns at auto plants on both sides of the border. The City of Windsor is seeking an injunction to get trucks rolling across the border again, the Globe reports.

Windsor Mayor Drew Dilkens said he hopes the Superior Court of Ontario will soon grant the injunction to end the “illegal” blockade, now in its fourth day, and restore traffic across Canada’s busiest link with the United States. “This is a national crisis,” Mr. Dilkens said at a news conference on Thursday afternoon.

No go: The blockade seems to have finally got the attention of Doug Ford, whose government moved to freeze millions of dollars donated to the blockaders through online fundraising platform GiveSendGo, CP reports.

The province obtained an order from the Superior Court of Justice that prohibits anyone from distributing donations made through the website’s “Freedom Convoy 2022″ and “Adopt-a-Trucker” campaign pages, said a spokeswoman for Premier Doug Ford. Ivana Yelich said the order binding “any and all parties with possession or control over these donations” was issued Thursday afternoon. She cited a section of the Criminal Code that allows the attorney general to apply for a restraint order against any “offence-related property.”

GiveSendGo said on Twitter that Canada is not their boss, basically.

Reverse! The federal Conservatives reversed course on Thursday and called for the blockades to end, the Globe reports.

“I am asking you to take down the blockades,” interim Conservative Leader Candice Bergen said in the House of Commons Thursday morning. “It’s time to remove the barricades and the trucks for the sake of the economy.” Before her election as interim leader, Ms. Bergen met with protesters blockading downtown Ottawa last week and called them “passionate, patriotic and peaceful.” She has since called on Prime Minister Justin Trudeau to extend an “olive branch” to the demonstrators and meet with them.

Not reversing: Pierre Poilievre, the frontrunner and only declared candidate for the leadership of the CPC, has not backed down from his support for the convoy. He released an open letter Thursday calling for the government to end vaccine mandates.

Moe criticized: Scott Moe is also declining to tell the blockaders to stop, which the opposition in Saskatchewan thinks is bad, CBC reports.

Manitoba, too: A blockade shut down the main border crossing between Manitoba and the U.S., the Winnipeg Sun reports.

BBC view: The BBC has a good roundup of the state of things in Ottawa, where the protest continues, and the city is struggling to get trucks towed.

Protest fun: The Citizen reports that an OPP officer was letting protesters get their pictures taken in his cruiser.

Protesters’ lament: Global’s Alex Boutilier has an interesting story revealing the view from the side of the protesters, who complain the authorities are “creating a political space where violence can occur.” This version of events—where the convoy’s enemies are smearing it—is detailed in “intelligence briefs” prepared for convoy supporters, purportedly “intel reports” written by Tom Quiggin, an independent researcher who formerly was a Canadian security official.

Dug in: Quiggin features in a worrying in-depth report from the CBC’s Judy Trinh, who points out that organizers with police and military expertise—including a former member of the Prime Minister’s protection detail—seem to be helping protesters dig in in Ottawa.

Insurrectionist: In the Calgary Herald, Don Braid writes that the protesters are increasingly revealing themselves to Canadians.

By this stage the protesters themselves are becoming almost irrelevant. We know their core ideology — rejection of elected government, belief in some overriding “authority of the land”, which only they of course represent, and the conviction that their issue trumps all others. The very thing they claim to abhor most, vaccine mandates and other COVID-19 measures, are falling all over Canada. But the trucks are not moving out. This is insurrectionist thinking with a single end point, authoritarianism.

Drag it out: Andrew Coyne, writing in the Globe, suggests that the Canadian political class should work on lowering the temperature, and we should strive to make the situation duller.

Let us recall first that greatest of political maxims, where there’s time there’s hope. Time allows for more creative thinking, for more pieces to be put on the board, for complicating what had had seemed to be simple and simplifying what had seemed to be complex – and for that uniquely Canadian solution to seemingly insoluble dilemmas, boredom. Russia, it was said, had General Winter on its side in any great conflict. Well, we have General Torpor, and should exploit this advantage to the fullest.

Still a good country: Our domestic strife is making headlines around the world, leading variously to gloating and fact-checking, but Canadians should not let that bother us too much, writes Lawrence Martin in the Globe.

Why not start with Canada’s ranking in a list of the best countries on a wide range of indices directed by U.S. News and World Report? That ranking is number one. Top of the heap. Greatest nation of them all. How about the current cause of upheaval, our supposed lack of freedoms? In a study based on political rights and civil liberties, Freedom House gives Canada one of its highest rankings, fourth overall and best among G7 countries. On the quality of its democracy, Canada ranks fifth, according to the Economist Intelligence Unit’s latest democracy index. A fine measure of a country’s progress is education. Canada, according to an OECD study, is the most educated country on the planet. On standard of living, studies put Canada fifth best, on health care sixth, on racial equality second. On immigration – a grading for countries on their welcoming of foreigners – this country stands first. On economic freedom, the best countries for doing business, a study by Forbes magazine puts it sixth. Canadians aren’t boasters. But given all the flack coming their way, it’s occasionally helpful to put things in perspective.