Undercover with Grit agents at the Tory convention 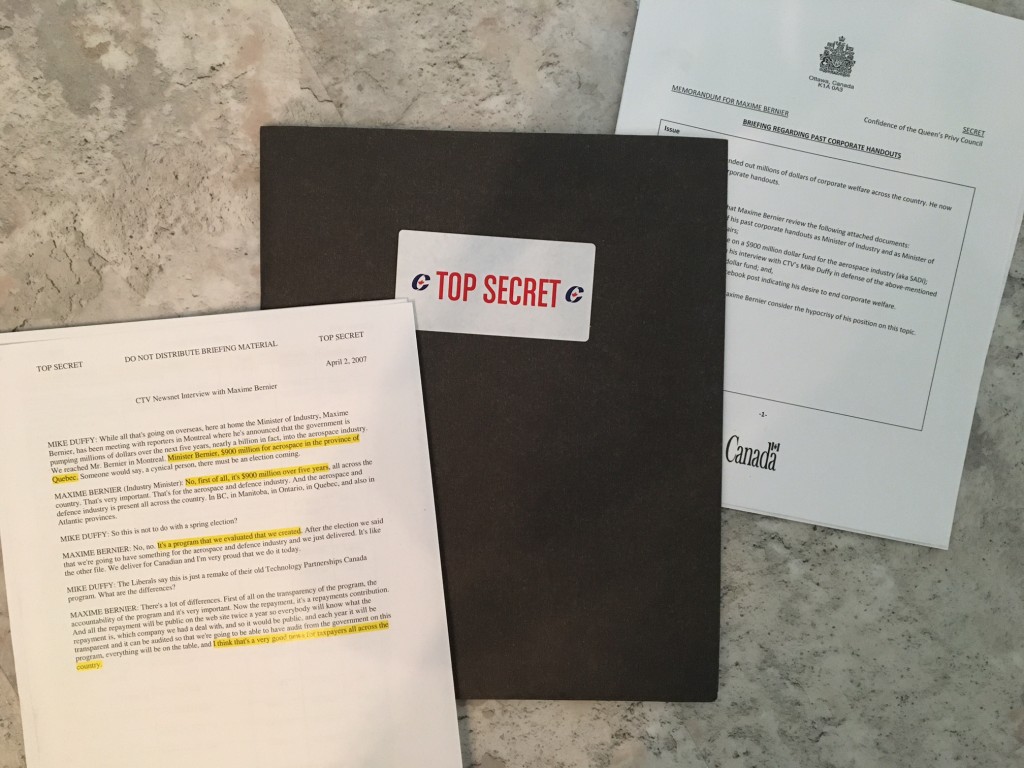 Two-thousand Tories took to the Toronto Congress Centre this weekend as a flock of blue sheep. Bewitched by candidates, be-blued by campaign shirts, they wore Tory-branded lanyards, shared Tory gossip and hailed Rona Ambrose as the heroine who “mopped the floor with Justin Trudeau.” Unbeknownst to most in this field, Liberal operatives were among them.

Kevin Bosch, research director for the Liberal Party, wore a blue dress shirt on Saturday and a Conservative-branded nametag like everyone else. His partner, Braeden Caley, the Liberal Party’s communications director, slinked at the back of the room. On Friday, the pair brought backup of three aides. On Saturday, the squad included two members of Parliament.

Inter-party “observers” operate with three primary missions: to gather intelligence, disseminate propaganda to divide the host party, and, for the recognizable faces like Liberal MPs Adam Vaughan and Francis Drouin, appear in media interviews to give the enemy bad press. On Friday, Bosch and Caley targeted the media filing room and scattered about 40 black folders, jokingly titled “Top Secret,” tempting journalists to read a booklet reminding them of the hypocrisies of Maxime Bernier. They planted erasers around the room, with notes reading, “Andrew Scheer can’t erase the past,” and toy scissors representing Scheer’s cuts to government spending.

“Knowing how thorough Kevin is, my suspicion is he’s probably got information on all the top candidates,” says Warren Kinsella, a former special assistant to Jean Chrétien. “Their hotel and flights are costing the party a lot for them to be there. They’re not just there to do nothing.” Bosch asked not to be quoted. Kinsella says, “They’re gonna be nervous to say [what they’re doing]. Nobody likes to talk about how they make sausages.”

Retired from the disruption gig, Kinsella is more transparent. When he worked for Chrétien in 1993, he set up a “war room” at the leadership convention in which Kim Campbell was a candidate. “We were feeding [Chrétien] rumours and stuff like that we were hearing,” he says. “You’ve got all these people together who nominally belong to the same party. A lot of them hate each other’s guts. We would make use of that.”

READ MORE: Tories to Liberals: pay up or don’t come to our convention

Whether they are called “warriors,” “task forces,” or “observers,” troublemakers at the federal level are tolerated for the sake of democracy. Parties almost always give opposition MPs free admission as a courtesy to the media who seek a balance of input. But this weekend, Vaughan and Drouin were outraged to learn they were told to pay for passes, i.e. donate to their enemies. NDP MP Alexandre Boulerice was welcomed for free. Vaughan and Drouin ended up walking in a back door without paying.

This sort of mischief permeates politics at all levels. At an Ontario PC convention in 2007, Kinsella booked a room in the middle of the venue, using the fake name of a law firm. “In the middle of the night,” he says, “we conducted a press conference right there. They were furious. They were livid. They wanted to kick us out but they couldn’t.” At another leadership event, for Ontario PC leader John Tory, who was criticized for being a “rich kid,” the Liberals handed out silver spoons.

Behaviour got extreme in 2011. During the Ontario election, Kinsella’s team got a tip that PC candidate George Lepp, while drunk, had Tweeted a photo of somebody’s genitals—possibly his own—before removing the tweet instantly. Kinsella’s team caught the photo and hung onto it until the candidate’s speech, then sent it to media outlets. “Right when he was going on about family values, we blasted it out,” says Kinsella. (Lepp and the Tories denied the photo was of him and claimed someone had gained access to his Twitter feed.)

Conservatives have been disturbers themselves. During the 2007 race against Ontario Liberal Dalton McGuinty, known for driving a gas-guzzling vehicle, the Tories tracked his whereabouts and wrote a press release warning drivers to expect highway delays along his route. One Tory researcher, who worked for Ontario provincial campaigns between 2005 and 2009, and who requested anonymity because he wasn’t authorized to share party secrets, says he sent sleuths with video cameras to stalk Liberal candidates on their campaign trails, sending footage back to Tory headquarters. At events, he says the Conservatives made opposition observers wear red badges to identify themselves and put up posters with their faces around the venue, reading, “If you see the Liberal spy, do not talk to them.”

This Conservative researcher says the Liberals agents are amateurs. “If I could get away with it, I would set up a war room, whether it was on site or at the hotel next door. I’d put on a great big show… I’d have a busload of the youth wing handing out the literature, saying why such and such a candidate is a bad idea. I would’ve had a welcome package saying, ‘Here’s the Conservative convention. Here’s why these guys are the worst people on the face of the Earth.’ ”

The red and orange sheep on the weekend claim they came in peace. Boulerice of the NDP says he was purely keeping watch (he was a lifeguard for 15 years). “I’m not here to create some problems,” he says. “I’m meeting with some of my Conservative colleagues and making some jokes. [I’m here] also because I’m a political freak and I like conventions.” Similarly, Francis Drouin says, “I respect the democratic process … The last thing I want to do is start a fight.”

Fighting is the first priority for Nick Kouvalis, former campaign manager for Kellie Leitch, John Tory and Rob Ford. “They’re losers,” he says of the Liberal spies. “They’re here ‘cause they’re scared. They’re sh—ing their pants.” He guarantees the Tories will “take down” Trudeau like they did his father. “We’re gonna do to Junior what we did to Senior.”

The Liberals were comparably tame. While Ambrose rallied her crowd, quoting a veteran MP about how she “kicked Trudeau in the balls,” the operatives responded only by tweeting about Liberal successes. Sunny ways, sunny warriors.