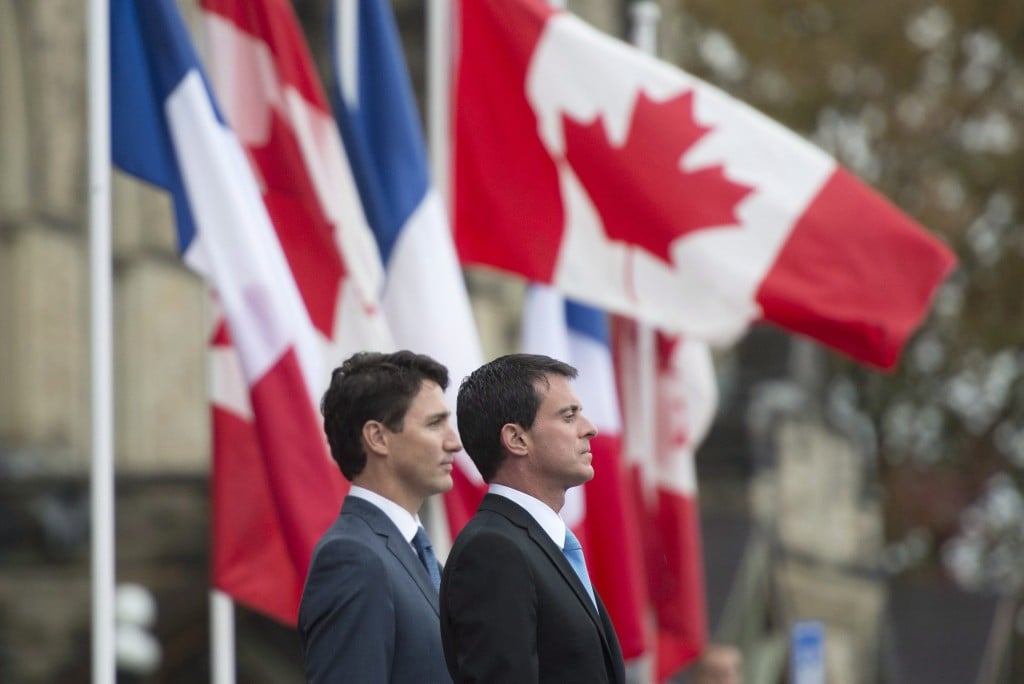 Canadian counterpart Justin Trudeau, however, wasn’t prepared to go anywhere near as far.

Manuel Valls – the guest of honour Thursday in a welcome ceremony and news conference on Parliament Hill – was categorical on how he saw the November election: Clinton is the preferred choice.

Trudeau would only repeat his long-standing message that he will work with whomever the U.S. people choose as their president on Nov. 8.

On the allegations of sexual assault swirling around the Republican nominee, a stone-faced Trudeau – a self-avowed feminist – would only say that he “has stood clearly and strongly all my life around issues of sexual harassment.”

“I don’t need to make any further comment at this time,” he added.

Valls also said he expects Trudeau to be in Brussels on Oct. 27 to sign the Canada-EU free trade deal. Trudeau called the deal a “win-win” for both sides.

He also said it’s a “progressive agreement that heralds a new approach with regard to defending the rights of governments to legislate on the environment, the rights of workers, the issues that our constituents care about.”

Trudeau also ended the news conference on a pointed note: in a post-Brexit world, not signing the agreement would send a strong and unsavoury message.

“If Europe cannot manage to sign this agreement, that sends a very clear message not only to Europeans but to the whole world that Europe is choosing a path that is not productive either for its citizens or for the world,” he said.

“That would be a shame.”

The French prime minister and Trudeau travel to Montreal later today for a luncheon hosted by Quebec Premier Philippe Couillard, where the free trade deal is expected to be the main topic of discussion.

Senior Canadian government officials say that the event is designed to highlight the leading role Quebec played in the protracted negotiations for the trade pact with Europe’s 28 member countries.

“The visit will also allow us to promote greater trade and innovation flows – particularly though CETA – to help grow the middle class and strengthen our economies,” Trudeau said in a statement.

Climate change and the Canada-EU free trade deal have been singled out by Trudeau’s office as being among Canada’s top priorities.

The Trudeau government has said it will commit 600 peacekeepers to UN missions, and France has been pushing Canada hard to join the UN mission in West Africa.

France has 3,000 troops fighting a separate counter-insurgency mission in several countries that used to be its colonies, under the banner of Operation Barkhane.