Could the former boxer be the leader to settle the country's crisis? 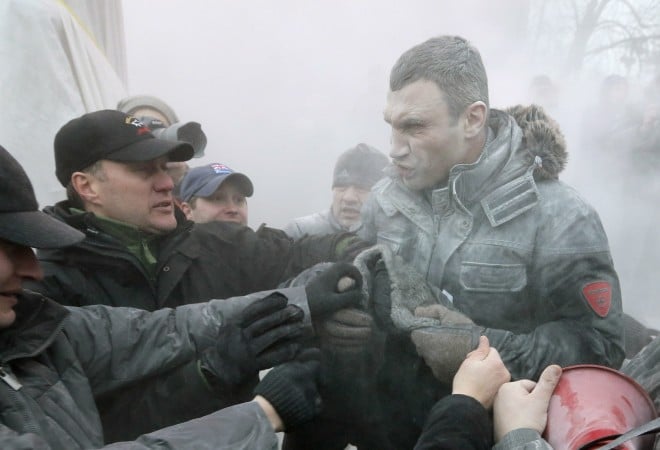 Opposition leader and former WBC heavyweight boxing champion Vitali Klitschko, right, is attacked and sprayed with a fire extinguisher as he tries to stop clashes between police and protesters in central Kiev, Ukraine on Jan. 19, 2014. (Efrem Lukatsky/AP)

Amid the growing protest movement in Ukraine, one man has quite literally stood out above the rest: former World Boxing Council heavyweight champion Vitali Klitschko, also known as “Dr. Ironfist.”

The six-foot, seven-inch tall former champion (and national icon) has emerged not only as one of the main opposition leaders in the uprising, but a figure some see as presidential material. Last weekend, he met for talks with president Viktor Yanukovych and reportedly turned down an offer to become Deputy Prime Minister, and instead demanded Ukraine’s presidential elections be moved up to this year from 2015.

Klitschko entered the political arena in 2006, following the Orange Revolution, when he became a full-time advisor to then-president Viktor Yushchenko. That same year Klitschko, who holds a PhD in sports science from Kyiv National University, landed a spot on Kyiv’s city council. The experience would help propel him to leader of the Ukrainian Democratic Alliance Reform party, better known by its Ukrainian acronym, UDAR, which means “punch.”

But unlike his brutal style in the ring, Klitschko, an MP in the Ukrainian parliament since 2012, is a rather mild-mannered politician, described by some as the gentle giant of Ukrainian politics. Indeed, despite his rather uncharismatic tone, Klitschko has become the peaceful mediator between the polarized opposition, which includes extreme nationalists, and the government, which has threatened to enact a state of emergency.

Klitschko continues to urge Ukrainians to come out and protest, assuring them that he is prepared to “face bullets” with them if it comes to that.

But he’s also calling for a peaceful, political solution. His UDAR party runs mainly on an anti-corruption platform, shows clear support of Ukraine’s integration into the European Union and wants to overhaul what it sees as an oligarch-controlled economy in order to deal with poverty. However, Klitschko has been criticized in The Ukrainian Week, a weekly Ukrainian magazine, for being unspecific about how his party will achieve any of that.

Nevertheless, if Klitschko’s boxing career (45 wins, 2 losses) is any indication of how well his political one will fare, opponents would be wise not to count him out.