On the morning after the first U.S. debate, Trump told Fox that Alicia Machado was 'the worst we ever had' 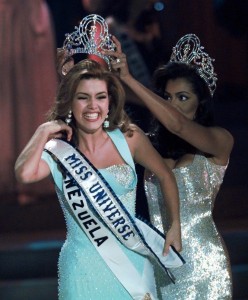 NEW YORK — A former Miss Universe was the unlikely topic of conversation at the first presidential debate between Republican Donald Trump and Democrat Hillary Clinton.

Trump repeatedly asked Clinton where she had heard that, then dismissed Clinton’s comment that Machado would vote for her with “OK, good.”

Machado went on a diet in 1997 after saying she gained at least 15 pounds. Trump said during a public workout that “she likes to eat — like all of us” and supported her weight-loss efforts.

On Tuesday, Trump said it was a “real problem” when Miss Universe gained significant weight after winning the pageant he formerly owned.

Trump told “Fox and Friends” that Machado was “the worst we ever had,” referring to past winners of the pageant.