A controversial wall—Clinton's not Trump's

At the Democratic National Convention, Hillary Clinton aims to unify the party. Her critics are focused on other obstacles 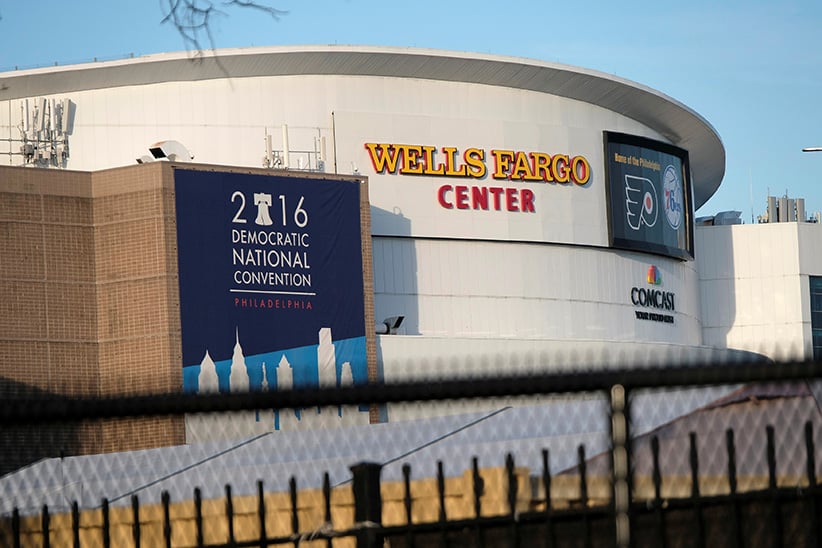 The Democratic National Convention in Philadelphia is off to a rocky start. Debbie Wasserman Schultz announced she would step down as chair of the DNC due to leaked emails showing her staff worked to support Hillary Clinton behind the scenes despite claiming to be neutral. This morning, Wasserman Schultz tried to speak to a group of Florida delegates but was interrupted by loud booing and protesters holding signs reading, “Thanks for the ‘help,’ Debbie” and “We don’t want cheaters in our party anyway.” The DNC is doing what it can to minimize the impact of protesters at this week’s convention but as many as 50,000 are expected. On Twitter, protesters are pointing out the irony of the wall the DNC has constructed to keep those who oppose Clinton (many of them Democrats) from getting too close, and pointing to parallels with the wall Donald Trump wants to build on the border with Mexico.

Supporters of both Bernie Sanders and Donald Trump are criticizing the wall as hypocritical.

Security walls are common at high-profile events. The Republican National Convention had a wall last week in Cleveland and Philadelphia had much tighter security back in September 2015 when Pope Francis visited.

The familiar temporary 8 foot high security fence up again,from Broad&Pattison down to 95 ramps for DNC @FOX29phillypic.twitter.com/3LXOzf8ncX

Nonetheless, many are drawing connections between the attempt to keep protesters out of the spotlight and the attempts to sideline those Bernie Sanders supporters who continue to criticize Clinton for, among other things, what they see as her cozy relationship with Wall Street.

The DNC welcomes voters to Philadelphia with a FENCE.
Whose interests are they protecting?#FeeltheBern #Women4Bernie pic.twitter.com/Gyh42zieYB

So far protesters have at least 60 events scheduled during the convention. Here’s a video of a man exploring the extent of the wall and seeing how close protesters can get to the convention:

Clinton tweeted her desire to be “building bridges, not walls” on Saturday.

“In Philadelphia, we’ll offer a very different vision for our country. One that is about building bridges, not walls.” —Hillary

But, her critics eagerly note, she voted to build a literal wall with Mexico several times as a U.S. senator. Clinton has made her opposition to Donald Trump’s proposed border wall with Mexico a frequent talking point of her campaign. She draws a distinction between the barrier she voted for and the wall Trump wants to build, but many protesters aren’t buying it. Here she is talking about her Senate votes.