Adnan R. Khan: Federal politics appears to be rebalancing after Trump's loss. But at the ground level, things look much bleaker for American democracy. 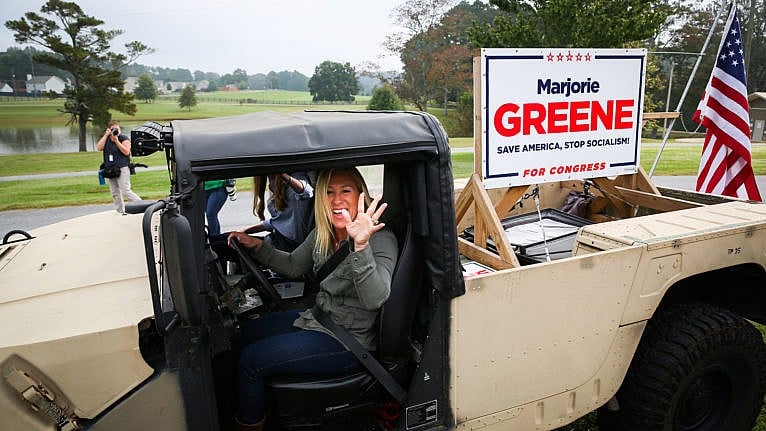 Greene, who has expressed support for the right-wing conspiracy group QAnon, leaves a press conference in a Humvee in Dallas, Ga., this month (Dustin Chambers/Getty Images)

For Alicia Abbott, Joe Biden’s victory in the Nov. 3 presidential election was bittersweet. The 36-year old Idaho native and Democratic organizer had devoted herself to ensuring a one-term presidency almost immediately after Donald Trump was named America’s 45th president in January 2017. It was mostly the “rapey thing” at first, she tells me, referring to the long list of sexual assault allegations that dogged Trump during his 2016 election campaign, but eventually came to run the entire gamut of his odiferous personality. Like millions of women across America, the battle to dislodge a serial liar, misogynist and racist from the White House began the day after he was inaugurated. Nearly four years later, they succeeded.

But the win has come at a steep cost. Abbott, who normally resides in the picturesque ski resort town of Sandpoint, Idaho, about an hour’s drive from the Canadian border, hasn’t been home in more than two months. She left Sandpoint in the lead up to the election after a fellow Democratic organizer had an arrow shot at her front door.

“I’d been receiving death threats from Trump supporters for a while,” she tells me by telephone, “but that arrow really made the danger real for me. So I decided to leave—mostly so my parents wouldn’t worry—at least until the election was over.”

The election passed, Trump lost, but the atmosphere didn’t improve. Indeed, it only worsened as Trump prodded his supporters into a frenzy with baseless allegations of voter fraud.

In northern Idaho, these were not merely those rural Republicans who voted for him because they didn’t know any better; they were the true believers, the religious fanatics, conspiracy theorists and anti-government ideologues who are genuinely convinced that the Democratic Party is engaged in a communist plot to destroy America, or have gone so far down the rabbit hole that they believe the Qanon conspiracy that the country is run by secret group of Satanic pedophiles.

With those kinds of people sending her threatening messages, Abbott decided to stay put in Oregon. From a safe distance, she has watched her home state veer off into an alternate universe where the political spectrum has swung so far right that the centre—the space she occupies—barely exists.

“Trump losing was great,” she says. “But if you look further down the ballot at the state level results, the radical right did really well in Idaho. I can now name four Republican state legislators who support Qanon conspiracy theories or have connections with the John Birch Society, or both.”

At the federal level, the political landscape looks like it is rebalancing itself: Trump and the Republican party are failing spectacularly in their attempts to overturn the election results. Many senior Republicans are now admitting openly that Joe Biden will be the president come Jan. 20. The judicial system, insofar as it relates to the basic tenets of democracy—things like protecting voting rights and requiring evidentiary proof to back up allegations of voter fraud—is holding its own. On the national stage, American politics does seem to be clawing itself back from the depths of the Trumpian abyss.

But from the ground level, things look decidedly bleaker, both for American democracy and for the Democratic party.

Idaho is one cautionary tale—a state where deep conservatism and distrust of government have been weaponized by Republicans for a cynical electoral agenda. In other states, particularly the battlegrounds like Ohio and Pennsylvania, Republicans have used gerrymandering, a process by which voting districts are redrawn to favour one party, to make it almost impossible for Democrats to win elections at the state and local levels.

The result, whether in solidly Republican states or gerrymandered battlegrounds, is that the outcome of an election is now such a far-gone conclusion that Republicans don’t need to worry about a centrist Democratic challenger who might appeal to centrist Republican voters. “What they do need to worry about is someone on the right taking them out,” Heather Cox Richardson, a professor of American history at Boston College, said in a recent Facebook livestream. “So they have moved very, very far to the right.”

Georgia’s gerrymandered 14th congressional district, for instance, spat out Marjorie Taylor Greene in the November election. During her campaign, Greene said that the Republicans have been handed “a once-in-a-lifetime opportunity to take this global cabal of Satan-worshiping pedophiles out.” Greene now claims she no longer supports Qanon, but she remains convinced that the Chinese Communist Party is somehow angling to take over America. And she’s also a racist.

The crazies pile up the lower down the political totem pole you go. In Idaho, Republican state legislator Vito Barbieri, an anti-abortion fanatic, asked during a February 2020 town hall why Planned Parenthood had not been “nuked off State Street”. “Judgment is coming,” he proclaimed. “That’s not my job; you know whose job that is.”

Another Idaho Republican legislator, Heather Scott, was reported by fellow Republicans in 2015 to have mistaken a fire suppression system hanging from the ceiling in her new office at the Idaho Capitol building for a listening device. They described how she climbed up on her desk and cut it down “with a knife she had on her person.” Since then, Scott has been photographed unfurling Confederate flags and headlining John Birch Society meetings where the coronavirus pandemic has been labeled a hoax.

It’s not surprising that the conspiracy theorists in Trump’s orbit exhibit unsettling paranoid streaks and a penchant for painting their political rivals as existential threats. Whether it’s a political tactic to gain Trumpian voters, who themselves occupy a universe of YouTube conspiracies and right wing media fever dreams, or genuine belief remains unclear. But either way, the result is a Republican party sliding inexorably toward far right radicalism.

Abbott says her mission now is to hold these radicals to account. She plans on returning to Idaho in the new year, once the state legislature is back in session. “There are a whole host of issues on their agenda,” she says, “including reversing LGBTQ and abortion rights. My parents are nervous about me going back but this is where the fight is, and I have to be there. If change is going come to the U.S., it will be at the grassroots. It will be from the ground up.”