Absolut Trump: A week of chaos and contradiction

Allen Abel in Washington: A resignation, more scandal and a hotel ballroom speech so bad that applause lines are met with stunning silence 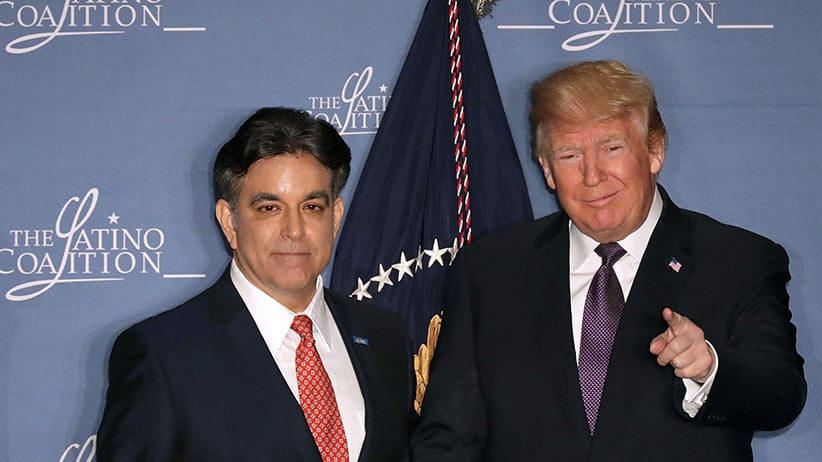 U.S. President Donald Trump is welcomed to the stage by Latino Coalition Chairman Hector Barreto during the organization’s legislative summit at the J.W. Marriott March 7, 2018 in Washington, D.C. (Photo by Chip Somodevilla/Getty Images)

On Monday, the president tweets: “The new Fake News narrative is that there is CHAOS in the White House. Wrong!”

On Tuesday, he stands next to the prime minister of Sweden and says, “I like conflict.”

The director of the National Economic Council resigns, following the communications director, the chief of staff, the press secretary, the chief strategist, the director of the Office of Government Ethics, and the national security adviser. Under the feet of the president’s daughter’s husband, the ice cracks. Trusted colleagues and confidants, facing ruin and prison, flip to the prosecution of a corrupt or clueless campaign and the man whose manhood fuelled it. The hand-picked cabinet is scandalized: private jets; first-class tickets; a European junket for a secretary’s wife; a $31,000 dining set for the supposed healer of inner-city poverty.

“I like watching it, I like seeing it, and I think it’s the best way to go,” the president says.

“Yeah, there will be people,” he shrugs. “There will be people that change. They always change. Sometimes they want to go out and do something else. But they all want to be in the White House. So many people want to come in. I have a choice of anybody. Everybody wants to be there.”

Elected by a minority of his countrymen to blow up Washington, he lights the fuse, holds his ears, and thinks himself the wiliest coyote on the prairie.

Maybe he is. The prime minister of Sweden rolls up to the West Wing in a Chevy Suburban, not a Volvo or a Saab. MAGA!!!

(Maybe the president’s father was even wilier. A pure-wurst German selling apartments to New York Jews between and after the world wars, he genetically modified his family tree. “My father came from Sweden as a child,” his son lied–for the first and last time ever—in The Art of the Deal.)

There is a ritual press conference in the East Room of the White House. The prime minister of Sweden, an actual Swede, is asked: “When it was just the two of you, where did you find most common ground?”

“Maybe almost everything?” The Donald blurts.

“We both come from outside politics,” hems the prime minister, a former welder and union man who actually has laboured for a living. “So that’s, perhaps, a similar background. Not similar—because it’s different.” Then he gives up. No one is similar. Everyone is different from this man.

The subject turns to North Korea and Little Rocket Man’s apparent willingness to lay his nukes on the table.

“To what do you owe this recent openness to talk?” Donald Trump—Big Rocket Man—is asked.

Now it is Wednesday. Sen. Orrin Hatch of Utah is warming up a group of Latino businesspeople at a downtown Washington hotel before a speech by the president. (It is not the Trump International Hotel across the street; that might be a conflict of interest, heaven forbid.)

“People said that the country is going to fall on its face when he becomes president,” chides Orrin Hatch. “It hasn’t. The country’s doing real well.”

The Dow Jones Industrial Average is down 104 points so far today.

Noise weighs more than expertise; flamboyance baffles brains. A global trade war is “loving, loving.” Chaos is comforting. Caution is cowardice. A German is a Swede.

Lunchtime at the Marriott on Pennsylvania Avenue. Three or four hundred well-suited men and women are in the ballroom. A man named Hector Barreto, chairman of the Latino Coalition and former head of the Small Business Administration under George W. Bush, is freighted with introducing Donald J. Trump.

READ MORE: Donald Trump has more in common with Winston Churchill than you think

It will be The Donald’s first tiptoe as President of the United States into a room filled with members of a community—though it is hardly the only community—that he seemingly has done his utmost to alienate and offend. (“They’re bringing crime. They’re rapists . . .”) Every diner has been screened by the Secret Service, but each table has a basketful of bread rolls and a puck-sized custard tart.

“We are not monolithic!” Baretto pleads. “Our community is too important to be out.” He notes that Hispanic-Americans own more than 4 million small businesses; that they start new ventures at a faster pace than any other minority group.

Trump takes the stage to applause that must be reported as “moderate”; compared to the Values Voter Summit or the Conservative Political Action Conference, it is a cacophony of crickets. One woman audibly whoops. But she is alone.

Now Trump is on stage with his prompters. He almost looks lonesome and he sounds a bit subdued.

“America First is about unity,” he says unemotionally. “It’s about coming together as one family—one big, beautiful American family—no matter our race, or color, or creed, to protect our jobs, our communities and our country. We want all Americans to thrive and flourish together.”

(This is his standard message when speaking to persons of varied histories and hues. “We are one nation,” he said in his Inaugural Address, 14 delirious months ago. “We share one heart, one home, and one glorious destiny.”)

“But a wealthy nation must be a safe nation,” the president continues in the Marriott ballroom. “Protecting the security of our country is my highest duty. It’s the most important thing I can do. That is why my administration is committed to securing our border, dismantling dangerous gangs, and stopping the flow of deadly drugs that are just pouring across. It’s never been a problem—like over the last three, four years.”

There is total silence in the room. Total silence. The President of the United States is giving a speech in Washington, D.C., and not one person applauds this passage. Not one. But it should be noted that no one hurls a custard tart.

“And we’re doing a job,” he goes on, “and I will say the Border Patrol and the ICE, and the all of the different people that are working so hard—law enforcement, generally—they’re working so hard on the drug problem. Never been a problem, but many countries are having this problem. But there’s never been anything like it in the history of this world, and it’s destroying people’s lives. So many. And we’re going to stop it. Every American child, regardless of where they live or what family they come from, should be able to grow up in a safe community.”

“My administration submitted a balanced and responsible immigration reform plan to Congress. Our plan fully secures the border; provides a permanent solution to DACA, which we’re really working on; and modernizes our immigration system by ending extended-family migration and the lottery system so we can eventually have a merit-based system where people can come in and work for your companies, work for you and do a phenomenal job—a phenomenal job. People that love our country and that want to love our country and our people.”

At the back of the ballroom is a substantial man named J.R. Gonzales, a fifth-generation Texan, a senior executive of the Texas Association of Mexican American Chambers of Commerce.

“We were here when Texas was Mexico,” he smiles. “We didn’t cross the border. The border crossed us.”

J.R. Gonzales hears the president’s speech, audits the stunning quiet, tries to steer the middle path between his community’s deep animus toward Trump and the reality of lower taxes, higher business and consumer confidence, and minimal unemployment.

“Do you think that Donald Trump is showing courage by coming here today?” a reporter asks.

These Hispanics are businesspeople, employers; builders of storehouses, workplaces, residences, and loving homes.

Two hours later, the daily White House briefing, also known as the running of the bull.

Even the upright Orrin Hatch has said that the  president’s attempt to punish China by imposing punitive tariffs on just about every other country in the world has left him “particularly troubled.”

“There are potential carve-outs for Mexico and Canada based on national security, and possibly other countries, as well,” The Donald’s mouthpiece announces.

The Dow rises 240 points to close at a marginal loss.

“I appreciate the fact that the economy is doing well,” says J.R. Gonzales at the Marriott Hotel. “But a light bulb always burns brightest just before it burns out.”