All eyes were on Donald Trump in the wake of Hurricane Harvey. They should have been on president-in-waiting Mike Pence. 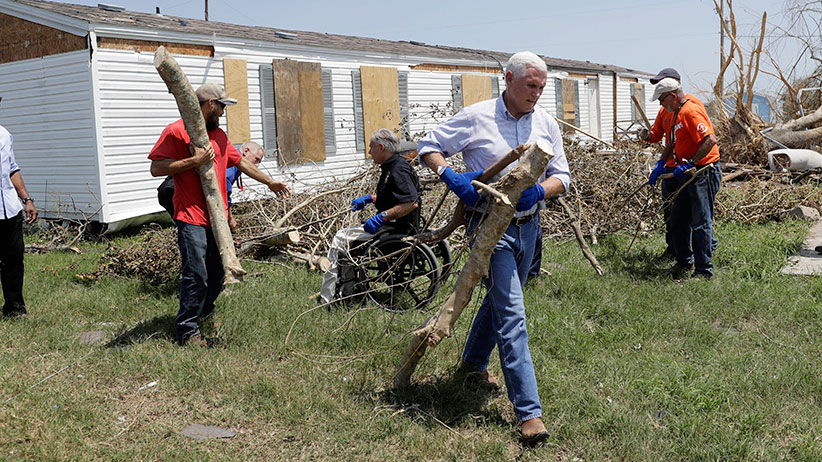 Before Steve Bannon left the White House, the going joke—if you can call it that—was that it was he, not Donald Trump, who was really running the place. This was perhaps a stroke of luck for Vice President Mike Pence, who, during the 2016 campaign, was added to the Trump ticket as a voice of reason, a more establishment politician who was, as CNN put it at the time, “a safe political option for Trump.” As a figure of the established U.S. conservative sect (and not a freewheeling neophyte rogue agent like Trump), Pence might have been expected to act as a normalizing force within the White House.

Yet, through the eight months of Trump’s presidency so far, Pence has been a virtual nonentity. His voice has been mostly absent; his thoughts either left unsaid or drowned out by the cacophony emanating from the Oval Office. Rather than looking to Pence to interpret what is going on, observers (ie. journalists) have been transfixed by Trump’s endless re-upping of apparently expendable personal advisers. Bannon, for example, was widely thought to be the most important voice in Trump’s ear—until he wasn’t.

Perhaps that alone explains Pence’s relative distance from both the president and the media. Close proximity to either is to tempt fate, it seems. Yet, Pence remains a key figure, whether we hear from him or not. As the Trump White House faces one controversy after another, and speculation mounts that Trump may not survive as president through his first term—or will face a Republican primary challenger before he gets a second—we might do well to keep an eye on Mike Pence.

There he was this week, in Texas, for instance, where he cut a considerably different figure than the president. While Trump and his wife, Melania, were scrutinized and criticized for what they said about Hurricane Harvey (marveling at its size) and what they wore to the disaster zone it left behind (branded hat; heels), Mike Pence flew into south Texas, donned blue jeans, and rolled up his sleeves to haul broken branches and embrace the locals.

READ: Donald Trump’s response to Harvey is better than it looks

Trump might have displayed the trappings of a president—he met the officials, did the press conferences, and waved the flag—but it was Pence who more closely resembled what people expect a president to look like in crisis times. It was not that long ago that, in the wake of another hurricane, then-President George W. Bush similarly opted to (quite literally) hover around the disaster, rather than engage with it. Who’s to know whether Bush’s uncaring reputation in those crucial hours, so bluntly summarized on national T.V. by Kanye West, weighed on Pence’s mind after Harvey, as it should have weighed on Trump’s.

Many wonder how long Trump can last as president, and, more importantly, who will be left standing if he doesn’t. Surely Mike Pence, very much a president-in-waiting, wonders the same.