Another mass shooting, another day in Washington. 'It’s hard to eliminate people who are madmen, no matter what we do,' says one senator. 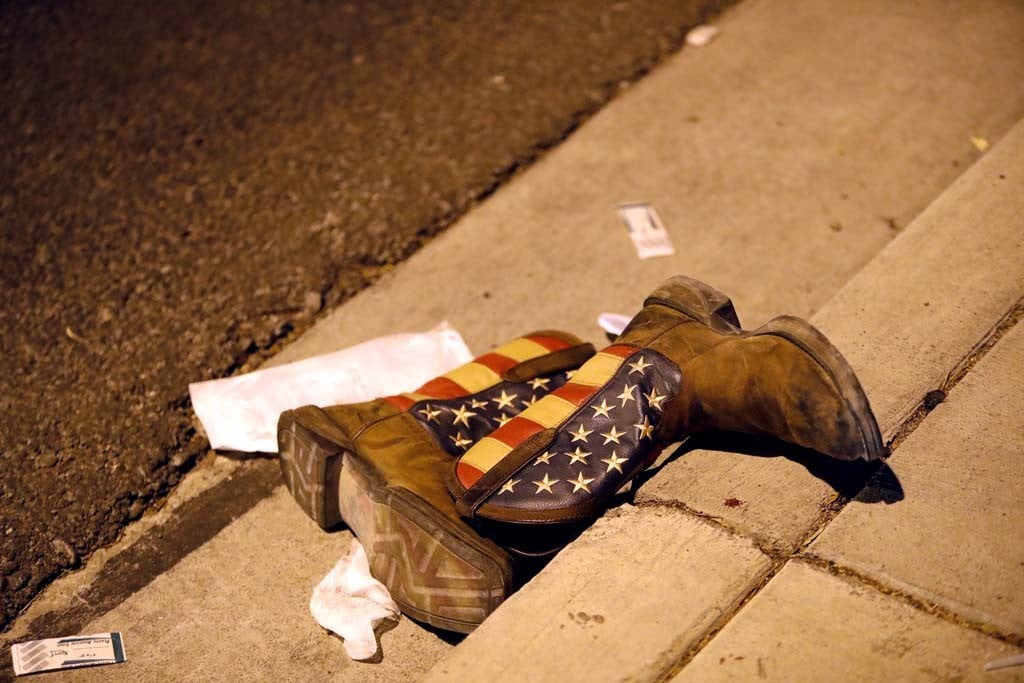 A pair of cowboy boots is shown in the street outside the concert venue after a mass shooting at a music festival on the Las Vegas Strip in Las Vegas, Nevada, U.S. October 1, 2017. (Steve Marcus/Las Vegas Sun/Reuters)

“Thoughts and prayers;” “senseless violence;” “triumph of evil;” “horrific tragedy”—phrases now commonplace in the wake of carnage and trite in face of tragedy echoed around the United States Capitol yet again Monday, but the only words that mattered after dozens of innocent citizens were slaughtered by rifle fire in Las Vegas came from Republican lawmakers adamant that there is no need for them to enact any legislation that might deprive sane and lawful Americans of their Constitutionally-blessed guns.

“Is there anything you can do about it in this building?” the newly-minted senator was asked. (Kennedy, no relation to the Massachusetts Camelot clan, was elected in a landslide last November, riding the Donald Trump wave across the Pelican State.)

“Not that I know of,” Sen. Kennedy answered. “I’m sure there will be an effort to politicize it and try to bring in more gun control, but that’s not the problem.”

This certainly was true—Democratic politicians already were erupting in anger and demanding action even as Nevada authorities were pleading for donations of blood for the hundreds of injured and wounded.

READ MORE: How the Las Vegas shooting compares to the five most deadly gun rampages before it

“It is positively infuriating that my colleagues in Congress are so afraid of the gun industry that they pretend there aren’t public policy responses to this epidemic,” Connecticut senator Chris Murphy stated. “There are, and the thoughts and prayers of politicians are cruelly hollow if they are paired with continued legislative indifference.”

“It’s time for Congress to get off its ass and do something,” demanded Murphy, who staged a 15-hour filibuster in the Senate in June, 2016, forcing Republicans to vote on—and thus publicly and conspicuously reject—a strengthening of gun-control laws.

Last year, Sen. Murphy’s marathon came at the same time that Democrats were staging a theatrical sit-in on the floor of the House of Representatives in the wake of the Orlando night-club shootings, whose briefly-held record for North American mass murder was eclipsed Sunday night. No militating bills were passed in either chamber, then or more recently, and at the time of Sunday night’s attack in Las Vegas, the Republican-controlled Congress was working through legislation to make it easier for holders of concealed-weapons permits to shlep their cannons across state lines.

There is no evidence that gun-control advocates are in the ascendancy across most of the United States. Last week, an appeals court declined to re-examine a lower court’s stay of a District of Columbia’s law  that limits concealed-carry permits to persons who can prove that they have “a good reason to fear injury” if they go around unarmed. Still, the Democrats seized on Sunday’s horrors—former Rep. Gabby Giffords of Arizona, herself a victim of a madman’s bullet, promptly arrived on Capitol Hill on Monday to call for action, and many others fired off fusillades on Twitter.

“Grim win for soulless gun industry,” tweeted Rep. Jared Huffman of California. “Gun sales will now soar — from those afraid, & surely from a few who would immitate. (sic) $$ all the same.”

(“The politics, especially on the left, only seem to get more heated more quickly with each shooting,” noted the Washington Post.)

“It’s hard to eliminate people who are madmen, no matter what we do,” Sen. Orrin Hatch of Utah told Maclean’s while his Democratic colleagues fulminated.

“How do you know this shooter was mad?” Sen. Hatch was asked.

“By definition,” he replied. And the 83-year-old Republican—a member of Congress since 1977 and the longest-serving Republican senator in history—said that “moral and religious feelings” were the best weapons “in the long term to stop people from becoming madmen.”

“We have to get back to our traditional values,” Hatch said.

Even Senator Susan Collins of Maine—hailed by many liberals as recently as last week for her firm and fatal stand against her caucus’s recent attempts to repeal Obamacare—hemmed and hedged when asked by a Maclean’s reporter if stricter gun controls were necessary in the aftermath of Las Vegas—and in advance of the next, inevitable, hecatomb.

This was the Republicans’ familiar catch-.22-calibre rationale: If 64-year-old Stephen Paddock had broken the law to amass his arsenal, then, logically, making all (or most) guns illegal would be of no effect.

While Congress entrenched itself along its usual battle lines, the president who vowed an immediate end to “this American carnage” made no overt move to lend his red-state popularity to any gun-control efforts.

“It was an act of pure evil,” Donald Trump said in a broadcast address from the White House that was unusual for the president’s direct quotation of Scripture: “The Lord is close to the brokenhearted and saves those who are crushed in spirit.”

The Donald’s own views on firearms have proved malleable over the years. In 2000, he wrote that “I generally oppose gun control, but I support the ban on assault weapons and I also support a slightly longer waiting period to purchase a gun.” But by the time he declared his candidacy for the presidency in 2015, he was boasting that “if I win, the Second Amendment will be totally protected, that I can tell you” and revealing that he often packed a heater for his own protection when going abroad in public.

The president’s reluctance to make political hay of Nevada’s horror was seconded Monday by press secretary Sarah Huckabee Sanders, whose father, Mike, the former governor of Arkansas and repeatedly-unsuccessful Republican presidential candidate, once called Barack Obama’s executive orders on gun control “unconstitutional and completely insane.” (Trump announced that he will travel to Las Vegas on Wednesday to pay tribute to the city’s first responders.)

“I think that’s something that we can talk about in the coming days and see what that looks like moving forward,” Sanders told reporters who asked about gun control at the daily White House briefing. “I think one of the things that we don’t want to do is try to create laws that won’t stop these types of things from happening.

“I think if you look to Chicago, where you had over 4,000 victims of gun-related crimes last year, they have the strictest gun laws in the country.  That certainly hasn’t helped there, so I think we have to—when that time comes for those conversations to take place, then I think we need to look at things that may actually have that real impact.”