The 'Saturday Night Live' writer-turned-U.S. Senator on the potential cost of jokes in politics and his burgeoning platform 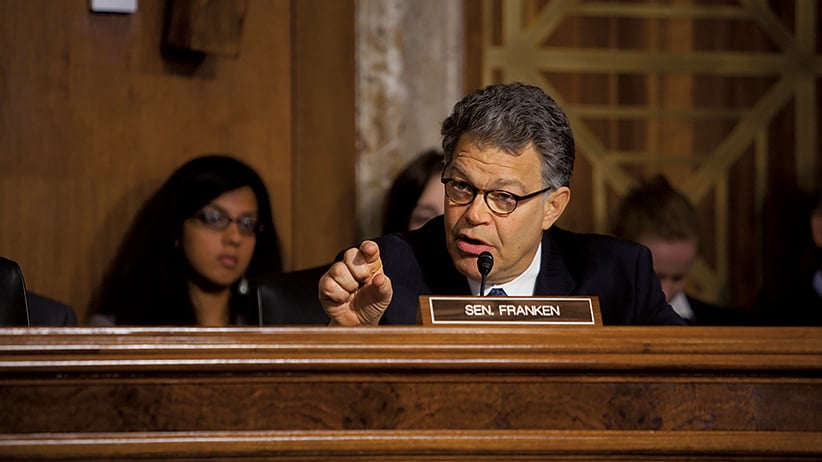 When Al Franken was elected Senator for Minnesota, he squeezed in by the tiniest of margins: a mere 312 votes. His Republican opponent had just about scuppered his campaign by attacking jokes he had made in his prior career, as a comedian and a writer for Saturday Night Live. But since then, he has become an unlikely folk hero, across the United States and beyond, by drawing on his controversial comedic past.

With Donald Trump as a reality-TV bull in the china shop of American civility, the former entertainer is now uniquely placed to be a matador. The 66-year-old’s caustic, bemused way of needling the likes of Betsy DeVos and Neil Gorsuch at Senate hearings often go viral. Such question-and-answer sessions, Franken acknowledges, are performances. “In addition to being a satirist who wrote books about lying”—most notably the subtly titled Rush Limbaugh Is a Big Fat Idiot—“and who can dissect things and find absurdity and frame it in a way that’s effective for people, the way you do it [is important],” he says in an interview with Maclean’s. “That’s one advantage from having been in show business.”

Another is that in a Democratic Party still reeling from Hillary Clinton’s loss in the 2016 election, Franken provides a recognizable name and face—if not a leader, then a focus. In his new memoir, Al Franken: Giant of the Senate, he revisits his unlikely transition from a hard-partying writer of sometimes gruesome sketches (remember Dan Aykroyd on Saturday Night Live as a blood-spattered Julia Child?) to an effective champion of the American Health Care Act, who’s now a figure of growing importance in the resistance against Donald Trump.

Along the way, he has had to figure out how to use his talents without causing broad offence, to avoid the kind of opprobrium that has befallen Kathy Griffin for a photo of her having mock-beheaded Trump (Franken calls her publishing it “a monumental misjudgment. I can understand how people think that’s an unforgivable image”). In his book, he explains the myriad times his staff have reined him in when he was about to make an inappropriate joke in public. Giant of the Senate itself was similarly vetted, he says—on the phone from a car in Manhattan with his communications director beside him—but nonetheless, “I tried to be as honest as I could. There’s things in [the book] that I said, ‘No, we’ve got to keep that in.’ I’m trying to tell people what it was like for a guy who’s written comedy for 35-plus years and has had his stuff put through the machine to ‘dehumourize’ it.” His political opponents, after all, decided that things he had said with his tongue firmly in cheek were in fact deadly serious during his first election campaign.

In the book, he says, he also wanted “to talk about not being as good a person as I could have been when I was affected by my wife’s addictions.” In Giant of the Senate, he writes about becoming judgmental and losing his temper as a reaction to his wife Franni’s addictive behaviour—something he came to terms with by attending Alcoholics Anonymous meetings for relatives of alcoholics. Here, as he does throughout the book, he shifts deftly between the ironic and the heartfelt: Franken details how these meetings inspired his parodic SNL self-help guru, Stuart Smalley, even as he credits Franni’s public confession about her struggles with alcohol, and her admission of how he helped her with them, as a turning point in his election. “The courage that it took,” he writes, “amazes me.”

Franken aims to educate too. His book details the inner workings of the Senate, without sparing his own rookie mistakes, or the blushes of others. He says he checked in with his colleagues before telling stories about them—apart from Ted Cruz, whom he depicts as having lied to him. “I felt that he had violated the norms of the Senate so seriously that I wanted to show people what the exception to the norm is. I get along with many of my Republican colleagues very well. That’s the only way you get stuff done in the Senate. That’s why Ted hasn’t gotten anything done.”

When Trump was elected, many on the left called on Democrats to ape Republican tactics, in defying anything and everything the administration tried to do. Nonetheless, Franken forges on with his attempts to get his bills co-sponsored by Republicans; sometimes, he even succeeds. Being able to crack jokes with the likes of Mitch McConnell and Jeff Sessions, he insists, can help. “I feel it’s extremely important to get to know each other as human beings, build some trust,” he says. “It’s a bit of a yo-yo with some colleagues. You go back and forth a little bit, but that’s part of the nature of the job.”

Franken is, however, unapologetically partisan: In the book, he portrays Republican political manoeuvres as self-serving, and blames the “inaction and gridlock” they fomented for helping “to create a nation of politiphobes, people who (correctly) felt that the political system was broken and rigged against people like them and (extremely incorrectly) felt that everyone who had anything to do with politics was more or less equally to blame.” Hence the election of Donald “Drain the Swamp” Trump.

And where Franken was attacked for his humour during his election campaign, Trump notoriously told a rally that “Second Amendment people” might do something about Hillary Clinton—i.e., shoot her—during his own campaign, before insisting he meant it as a joke. “That’s about a guy clearly not understanding that there are people out there who are kind of nuts,” says Franken, “and that that’s an incredibly irresponsible thing to say. I’ve never seen the man laugh. In all this time that he has been on the air, during the campaign, and now, I have still not seen him laugh, so I don’t know even what a joke means to him. I think he has a different relationship with jokes and humour than most people.”

And what of House Majority Leader Kevin McCarthy’s remark to Speaker of the House Paul Ryan about how Putin “pays Trump,” which Ryan claimed was also joke? “That’s called ‘kidding on the square,’” says Franken. “You can make a joke, but you can mean it. He meant that it was pretty clear that Trump has a relationship with Putin, or Russian oligarchs. It’s true that a Russian oligarch paid twice as much for a home of Trump’s in Florida than it was worth.” Franken is referring to the mansion Trump bought for US $41 million in 2004 and sold for $95 million to Dmitry Rybolovlev in July 2008, in the midst of a recession. “That’s the way the Russians often sink their hooks into a guy. That’s part of the Kremlin playbook.”

When Trump fired FBI Director James Comey in the midst of an investigation into the Trump campaign’s potential ties with Russia, Franken rallied support for the appointment of a special prosecutor. In his book’s introduction, he writes, “Watching Donald J. Trump take the oath of office to become the 45th president of the United States was perhaps the most depressing moment I’ve had since I entered politics, although that record has been repeatedly surpassed since January 20.” For example, he calls Trump’s having pulled out of the Paris Accord “a disaster.”

“As I write in the book, I don’t want my kids 50 years from now saying, ‘Grandpa, you were a senator and you knew climate change was happening. Why didn’t you do anything? And also, why are you still alive?’ I’ll be 116, but I kind of hope I do make it there because all the National Institute of Health money I want to invest …”

Franken brings the conversation to health care whenever he can, using what he calls, in Giant of the Senate, “the most ridiculous Politician Skill I had to learn,” i.e., pivoting between topics. Having been a catalyst for the passage of the Affordable Care Act (apparently by launching an f-bomb-laden tirade at Obama advisor David Axelrod to convince the President to try to push the bill through the Republican-controlled House), he’s now committed to fighting its repeal. And he does this—while also promoting a bill that seeks to curb the cost of pharmaceutical drugs by allowing Canada to export them to the U.S.—with a gravitas that comes across as, well, presidential.

“It helps to be a voice,” he says of his ever-increasing platform. “I speak out on a lot of things, and whatever can build my audience for that is a good thing. You don’t have to be running for president to want to have a national effect on things, so I’m enormously flattered that people suggest that I’d make a good president, but what’s important to me is what’s happening right now, which is health care …”

Giant of the Oval Office? Doggone it, it could happen.