Scott Gilmore on how if the party wants to win again, it needs to bring a much better ground game and a bigger knife 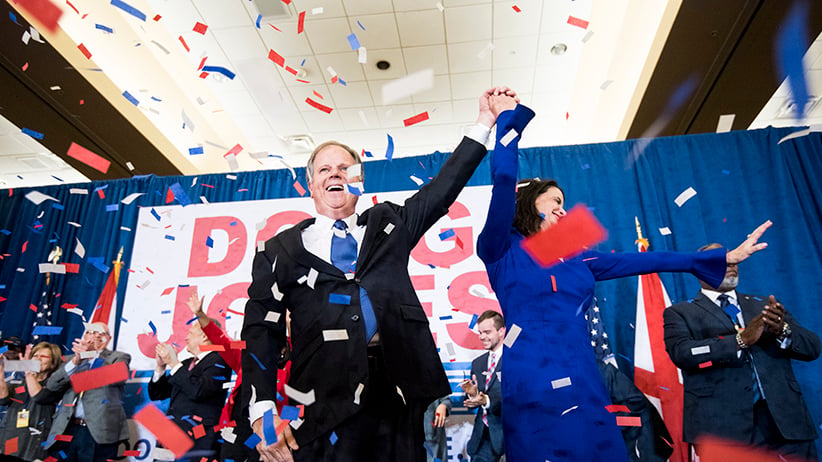 UNITED STATES – DECEMBER 12: Alabama Democrat Doug Jones celebrates his victory over Judge Roy Moore at the Sheraton in Birmingham, Ala., on Tuesday, Dec. 12, 2017. Jones faced off against Judge Roy Moore in a special election for Jeff Sessions’ seat in the U.S. Senate. (Photo By Bill Clark/CQ Roll Call)

For those Americans fed up with their president (currently that is almost 60 per cent of them), Tuesday night was a good one. Alabama voters elected Doug Jones, a liberal Democrat, to the U.S. Senate, over Roy Moore, a staunchly conservative Trump supporter.

This was a remarkable upset—Alabama is considered one of the most Republican states in the union. In the last Senate race, Democrats didn’t even bother to field a candidate. Understandably, many are celebrating Jones’s victory as a promising talisman for the 2018 midterm elections.

And, on the surface, it does seem like a remarkable achievement to flip one of the reddest states in America to blue. But, if you take a closer look, there are several worrying things about this victory that should be keeping the Democratic Party up at night.

To begin with, if this election taught us anything, it is that the United States has now moved into an era of post-partisan politics. People are no longer elected because of their party platforms, their political ideology or their policy ideas. It is now all about loyalty to your tribe. In Alabama, the overwhelming majority of white voters would rather elect a pedophile than a Democrat.

This means that running on good ideas isn’t enough anymore. The Republicans have figured this out. They have no problem passing tax legislation that will disproportionately harm their own base, because they know their voters don’t care about policy. The Democrats need to find a way to either make politics about ideas again, which seems ambitious, or start waging their own tribal war with the same skill as the GOP.

RELATED: Alabama faithful pledge their allegiance near the pulpit

The Dems also need to recognize they are not fighting by the same rules, and this is a problem. The same week the Democrats were throwing out one of their most capable Senators, Al Franken, after accusations of unwanted kissing, the Republicans were rallying behind a candidate who was widely suspected of pedophilia and sexual assault. This isn’t to say Franken’s departure wasn’t warranted. But if the Democrats are going to hold themselves to a higher moral standard than ever before, they should do it knowing their opponents are just going to use that to their own advantage. I say fight the good fight. But understand you are bringing a knife to a gunfight.

The Democrats are going to have to relearn how to run elections, too. A friend of mine from Birmingham wanted to help the Jones campaign, and it proved almost impossible. They were too disorganized; so she eventually gave up and helped the ACLU register voters instead. In Mobile county, the NAACP called every registered voter who had not voted in the 2016 election. They went door-to-door registering new voters. They organized a large ride-to-the-polls system. They set up robo-calls with local churches, and registration drives with school alumni associations. In short, they did all the things the Jones campaign should have been doing.

Given the importance and profile of this race, the Democratic National Committee should have ensured his ground game was on fire. It wasn’t. Just like Clinton’s wasn’t in 2016. To be fair, according to reporting in Politico, the DNC did send help in the later stages of the race after being criticized for its lack of support during other recent special elections.

There’s no excuse for not getting this right. Setting up a competent campaign machine is not an arcane science. It just takes simple organizational skills. There is time to make sure this is in place nationally by 2018, just barely.

Finally, it’s important to note Doug Jones was effectively elected by the African-American vote. You’d think this would be a given. Roy Moore is openly racist. He has said he thinks the United States was better off during slavery. He regrets the constitutional amendments that gave blacks the vote. But African-Americans have felt largely ignored and taken for granted by the Democratic Party. NBA star Charles Barkley, a native Alabamian, flew in to campaign for Jones. At the victory party he told CNN, “It’s time for [the Democrats] to get off their ass and start making life better for black folks and people who are poor.”

He’s right. As tempting as it is to spend every day attacking Trump for his Russian ties and his general incompetence, the Democrats are going to need more than that if they want to win in the 2018 midterms, and then take back the White House in 2020. They need a bigger knife. They need a stronger ground game. And they need a strong case for how they are going to make America great again for everyone. Just pointing at the guy with the orange tan isn’t going to work.

MORE ABOUT THE DEMOCRATIC PARTY: