Watch out Hillary Clinton. A battle is brewing in the Democratic party 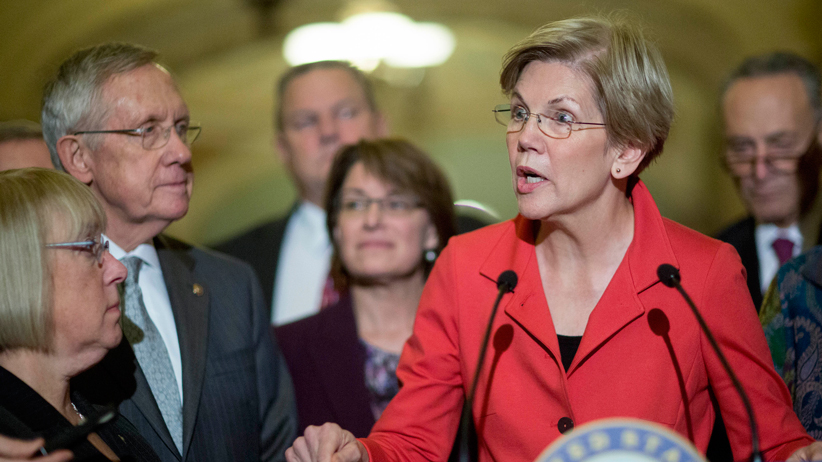 Move over, Tea Party. This year’s in-the-family ideological struggle is brewing among Democrats. Stagnating wages, historic levels of income inequality and simmering resentment against Wall Street have convinced the left wing that the moment is theirs to seize.

While conservatives have turned taxes, gun rights and abortion into litmus tests for Republican candidates, progressives want to do the same with the growing gap between rich and poor. “2015 is going to be a big year,” predicts Neil Sroka, a spokesman for Democracy for America, one of the major liberal activist groups in the U.S. “The fight over income inequality in the United States is going to be the defining issue of the next presidential election.”

Democrats have seen presidential hopefuls who excited activists, but failed to appeal to the broader swath of Democrats: Ohio Congressman Dennis Kucinich, and the anti-war former governor of Vermont, Howard Dean, for example. But that was before the bottom fell out of the U.S. economy, and a recovery that has benefited mostly the wealthy. “It’s a different moment,” says TJ Helmstetter, a spokesman for the Progressive Change Campaign Committee, another influential liberal group. “The country is hungry for economic populism and tired of feeling that the little guy doesn’t have a shot against giant corporations, banks, lobbyists and CEOs.”

A majority of Democrats—59 per cent—also consider income inequality a major national challenge (compared to 19 per cent of Republicans and 49 per cent of independents), according to a recent poll by the Pew Research Center. Even Federal Reserve chair Janet Yellen warned in a speech in October that America’s inequality in income and wealth are now at their highest levels in a century and the trend is of “great concern.”

Voters who call themselves “liberal” have also become a larger share of the Democratic party—from five per cent in 1994 to 23 per cent in 2014, according to Pew. And much like the conservative wing of the Republican party, the progressives intend to use the nomination process to flex their muscles.

The groups are already hiring organizers in early-voting states such as New Hampshire and Iowa, where activists will “bird-dog” candidates (meaning they’ll question them at all their public events) and run television ads. They will be pushing a specific agenda of economic populism: raising the minimum wage, expanding social security benefits for retirees, student-loan reform, and breaking up large banks. Sroka predicts nothing less than a “battle for the soul” of the Democratic party. “There is a Wall Street wing that is concerned with finding ways to get close to moneyed special interests and a Warren wing concerned about whether all Americans have access to opportunity,” he says.

The “Warren wing” refers to Elizabeth Warren, a former Harvard law professor who now holds Ted Kennedy’s old seat in the Senate; she has become the icon of the populist left with her scathing critiques of the financial industry and proposals for reform. Warren was the most sought-after Democratic speaker during the 2014 mid-term elections—in both liberal and conservative states. She travelled the country energetically raising money and campaigning for colleagues with her populist message. “Any candidate who runs [had] better sound a hell of a lot like her,” says Helmstetter of the Progressive Change Campaign Committee. The PCC is not drafting Warren but is actively pushing any candidate who runs to adopt Warren’s agenda.

Sroka’s group of one million members was founded out of the remnants of Dean’s 2004 campaign. When they held a poll of its membership this fall, Warren beat presumed front-runner Hillary Clinton by a landslide. “The poll results we got are an expression of that desire for a real primary and not just a coronation,” Sroka says. Warren says she does not plan to run for the presidency, but her supporters either don’t believe her, or say her influence will be felt regardless.

Clinton herself has already embraced some of Warren’s populism, decrying the wealth going to “not just the top one per cent but the top 0.1 per cent, the 0.01 per cent of the population.” But she has come under criticism for taking hundreds of thousands of dollars in speaking fees from Goldman Sachs and other Wall Street groups since leaving government.

Still, moderates inside the party are not running scared. “Elections are won by winning over the centre,” says Jim Kessler, vice-president of policy at the Third Way, a think tank that came to prominence during the administration of Bill Clinton. Kessler says economic growth, not redistribution, should be the party’s top priority. “Raising the minimum wage is great, we should do that, that’s a very small answer to a very big problem,” he says.

Expanding Social Security is a step in the “wrong direction” at a time when the population of retirees is growing and the pool of workers is shrinking, he says. “It means spending more money on people who have already left the workforce when we need to get people prepared for the workforce: better schools, less expensive colleges, higher graduation rates, better adult training for people in the workforce, far more spending on infrastructure, clean-energy research, new technologies that can create jobs.”

While progressives point to several liberal candidates, such as Al Franken in Minnesota and Jeff Merkley in Oregon, who held their seats in November by running on populist ideas, issues such as the minimum wage and pay equity for women did not prevent Democrats from losing the Senate. “This last election, Democrats were offering voters fairness and voters were looking for prosperity,” says Kessler.

The battle lines are drawn.

Editor’s note, Jan. 5: This story has been updated to clarify that the Progressive Change Campaign Committee is not drafting Elizabeth Warren, but is actively pushing any candidate who runs to adopt her agenda.