Bernie Sanders and Michael Bloomberg are both talking about what it means to be Jewish, and demonstrating the diversity of opinion among Jews 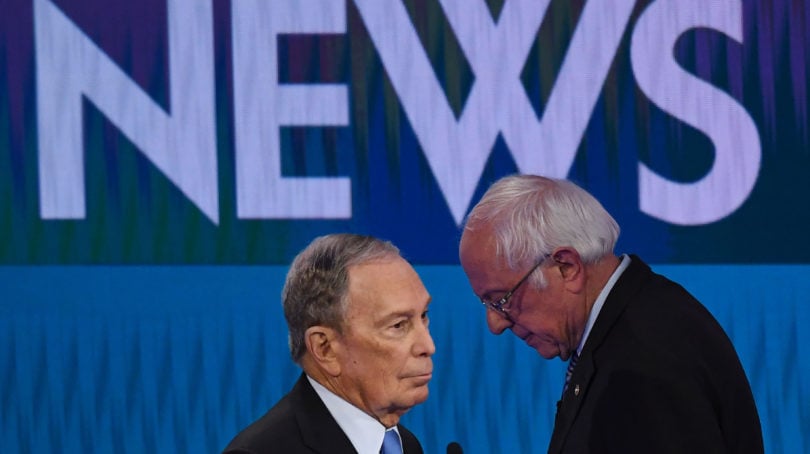 Democratic presidential hopefuls Bloomberg and Sanders speak during a break in the ninth Democratic primary debate of the 2020 presidential campaign season in Las Vegas on Feb. 19, 2020 (MARK RALSTON/AFP via Getty Images)

Does anyone care that the United States might elect is first Jewish president? One of the frontrunners for the Democratic presidential nomination, Senator Bernie Sanders, is Jewish. So is former New York City Mayor Michael Bloomberg, whose campaign is aimed at voters who want to stop Sanders.

When Al Gore chose Senator Joe Lieberman as the vice-presidential nominee in 2000, it set off what the Los Angeles Times described as “scores of telephone queries from Jewish Americans” donating to a political campaign for the first time. Twenty years later, the reaction has been less warm. According to a Pew poll conducted just before the primaries began, Joe Biden, Elizabeth Warren and Pete Buttigieg all had more initial support among Jewish voters than either Sanders or Bloomberg.

One difference between 2000 and now is that Lieberman was a religiously-observant Jew who didn’t campaign on Saturdays, and frequently talked about his Jewish identity and what it meant to him. Sanders and Bloomberg are very different candidates, but what they have in common is that neither of them are religious, and neither of them have made their Jewishness central to their previous campaigns. As late as the 2016 primary, the New York Times published an article headlined “Bernie Sanders is Jewish, but He Doesn’t Like to Talk About It,” noting that Sanders called his father simply “a Polish immigrant” in a major speech.

Another reason neither candidate has consolidated Jewish support may be that they are on somewhat different sides when it comes to Israel, and this reflects a major and growing divide in U.S. Jewish communities.

When the American Israel Public Affairs Committee (AIPAC), a major lobbying group that supports a hawkish line when it comes to the defense of Israel, invited candidates to its annual convention, Sanders turned them down, calling AIPAC too close with “leaders who express bigotry and oppose basic Palestinian rights,” and later referring to Israeli Prime Minister Benjamin Netanyahu as “a reactionary racist.”

Bloomberg accepted the invitation and chided Sanders’s comments as “offensive, divisive, and dangerous to Israel—America’s most important ally in the Middle East—and to Jews.”

This divide, between people who want more or fewer conditions on America’s support for Israel, colours the way the candidates are viewed.

Gil Troy, Professor of History at McGill University and author of Why I Am a Zionist, says that calling Netanyahu racist is “perpetuating the anti-Semitic line that Zionism is racism,” and fears that a Sanders victory might “further empower and raise the profile even further of the small, extremist group of Jewish blame-Israel-firsters,” eventually weakening the Democratic party’s strong current support of Israel, which is one of the few things in U.S. politics that remains truly bipartisan.

Peter Beinart, who was the editor of The New Republic when it endorsed Joe Lieberman for president, but is now a frequent critic of modern Zionism, says Sanders “has a lot of support from young American Jews, but among older and more religiously observant Jews, there’s a lot of hostility because he’s a public critic of the Israeli government.”

But if Bloomberg has more traditional views on Israel, Sanders’ younger supporters sometimes see his politics as part of an American Jewish tradition in itself. The New Republic, which has moved to the left in recent years, recently ran an article by Talia Lavin titled “To Dream of a Jewish President,” praising Sanders as part of a tradition of secular Jewish leftism. She told Maclean’s that she takes pride in how Sanders represents “a certain strain of specifically secular Jewish yearning for justice and struggle for it. I think it is thrilling to have a real challenge to the stranglehold of Christianity over American politics.”

The novelist Herman Wouk, who was born in 1915, recalled disapprovingly that when he was a boy in Sanders’ native New York, there was “an endemic desertion to socialism” among younger Jews, who found meaning in social-justice politics that they couldn’t find in traditional religion. Even Sanders isn’t old enough to remember that era, but he did spend several months living on a kibbutz in Israel in the early ‘60s, back when it seemed like that was the best hope for non-authoritarian socialism.

In a recent speech at a Miami synagogue, Bloomberg sarcastically called out Sanders for his apparent conviction that Judaism and socialism are interconnected: “Now, I know I’m not the only Jewish candidate running for president,” he said, “but I am the only one who doesn’t want to turn America into a kibbutz.”

Still, one thing that has changed for both candidates is that they are acknowledging their Judaism, publicly and repeatedly, in a way they hadn’t before. Sanders wrote an article called “How to Fight Antisemitism” for the left-wing magazine Jewish Currents, and when Donald Trump said last year that Jewish Americans are showing “disloyalty” to Israel when they vote Democratic (as most of them do), Sanders responded by calling himself “a proud Jewish person.”

Bloomberg’s Miami speech referred to the Jewish concept of “Tikkun Olam” (repairing the world), explained why Trump’s promulgation of conspiracy theories creates a dangerous climate for Jews, and mentioned a local Jewish delicatessen that went out of business some time ago.

It could be that both politicians simply consider this to be a good electoral strategy: Beinart, who writes for Jewish Currents, thinks Sanders is talking more about Jewishness “in order to humanize himself and also to ward off charges of anti-Semitism because of his criticisms of Israel.” But the result is that the U.S. has two presidential candidates with large media presences, both talking about what it means to be Jewish, and demonstrating the diversity of opinion among Jews.

“Anti-Semites or even just confused outsiders speak about ‘the Jews’ as a monolith,” Troy says, but surveying the candidates from Lieberman in 2000 to Sanders today, “the generalizations have to go very, very broad to encompass both politicians.”

Sanders and Bloomberg are both 78 year-old New York Jews running for president, and yet they’re incredibly different, and attract very different Jewish supporters. That might be, in the worn-out phrase, good for the Jews.