Allen Abel in Washington: As if trade wars, the Russians and North Korea were not enough to juggle, a torn America begins another battle 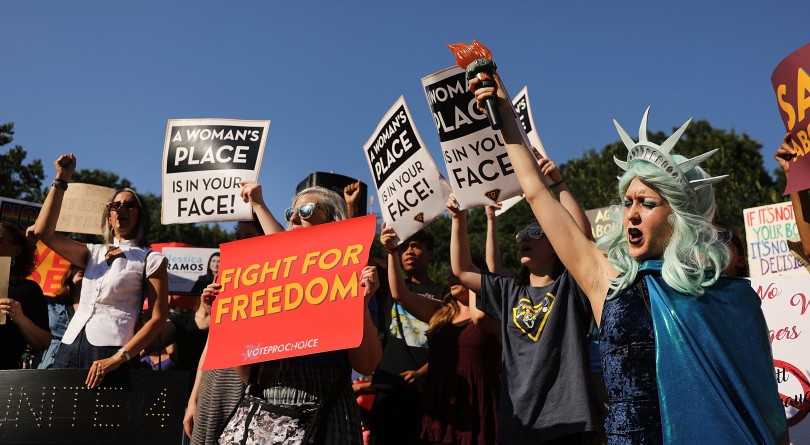 Local politicians, activists and others participate in a protest in Union Square to denounce President Donald Trump's selection of Brett Kavanaugh as his nomination to the Supreme Court on July 10, 2018 in New York City. (Spencer Platt/Getty Images)

A torrid sun was setting behind the Lincoln Memorial, with its naïve hope by a martyred president that the politics of the United States might be conducted “with malice toward none and charity for all,” when the teenager from the purple-shirted PROTECT ROE delegation stuck her megaphone right in the earlobe of the guy with the photos of the aborted fetus on his protest sign, while a priest—or a guy in a Halloween priest’s costume—strutted around in a habit that said “Lesbian Gay Bisexual Transsexual Morals Are Worse Than Animals—Proof: the National Zoo” and a man in a TRUMP FOR PRESIDENT shirt started blowing the shofar and singing “Just like a tree that’s standing by the water, we shall not be moved” and a dozen well-scrubbed college kids of both sexes began chanting “We are the pro-choice generation” while a larger delegation of voluble females semi-circled them, bleating “Hey hey, ho ho—the patriarchy has got to go.”

“It’s Kavanaugh!” someone shouted, just past nine, into this fractious din.

It was nomination night on the marble steps of the U.S. Supreme Court, and the only thing the protestors and the supporters and the standers-by had in common were a welter of fresh mosquito bites and the conviction that something urgent was about to occur in this torn and tariffed country.

Fervid and fanatical (many of these folks perform these same carnival acts day after day after day beneath the portico that says EQUAL JUSTICE UNDER LAW) or ingenuous and passionate about invoking their sacred right to assemble and to shout their truest beliefs the demonstrators were reacting to Donald Trump’s second nomination to the highest court.

This was his prime-time reveal from the White House that District Court Judge Brett Kavanaugh, a life-long inhabitant of the right flank of the same Washington swamp that Trump and his Deplorables profess to despise, was his choice to succeed the retiring Anthony Kennedy, the last swing-vote hope of the gasping American Left.

“Throughout legal circles, he is considered a judge’s judge—a true thought leader among his peers,” said Trump, to whom these latter words rarely have been applied.

READ MORE: Trump trashing NATO isn’t important—what the alliance does next is

Trump’s acclamation of Judge Kavanaugh—“He coaches CYO Basketball, serves meals to needy families, and, having learned from his mom who was a schoolteacher in D.C., tutors children at local elementary schools,” the president said Monday night—set off yet another partisan cherry bomb on Capitol Hill, as if the border and the trade wars and the Russians and North Korea and the Middle East and NATO were not enough for one cockamamie administration to juggle.

What begins now is a summer and autumn of in-camera and on-camera posturing, attack advertising, and poisonous red-blue malice, all of it leading to the same inevitable result—a 51-48 or 50-49 vote in the Senate to confirm Kavanaugh and enrobe him in black till death do him and the republic part.

Only a scandal of Bill Cosby/Matt Lauer/Harvey Weinstein dimensions could conceivably derail the course of this candidate’s confirmation, and it can be taken for granted that Democratic Party donors and operatives will spend tens of millions of dollars this summer trying to uncover such a heretofore hidden blot. (If they do derail Kavanaugh, Trump will simply nominate another ardent conservative.)

As Barack Obama once said to John McCain: “The election is over.” Twenty months after the 2016 cataclysm, Nominee Kavanaugh and Associate Justice Neil Gorsuch—and there will be another opening for Trump to fill, should Justice Ruth Bader Ginsberg falter, God forbid, so late in her ninth decade—not to mention nearly two dozen new federal appeals-court judges, are the fruit of Trump’s hundredth-of-a-per-cent victories in Pennsylvania, Michigan and Wisconsin. (Meanwhile, a major new poll published Tuesday by the Axios organization gives Democrats almost a zero chance of retaking the Senate this November, even if they manage to stall the Kavanaugh confirmation that long.)

At the Supreme Court on Monday night, a man in a Trump mask was handing out phony three-dollar bills with a cartoon of Vladimir Putin stringing The Donald along like a marionette. The serial number on each banknote was 2,865,075, which was Hillary Clinton’s margin in the popular vote, which is about as valuable today to the Democratic Party as a three-dollar bill.

So this was the backdrop as the Senate convened on Tuesday to begin yet another round of the kind of bickering that John Cornyn, old Republican of Texas, called “angry and unhinged.”

“The Democrats think that if you can’t see Lex Luthor and Darth Vader in this candidate, there’s something wrong with you,” said Todd Young, Republican of Indiana. “We need a lot less WWE Thunderdome and a lot more Schoolhouse Rock.”

“This is a corrupt bargain,” Bob Casey, Democrat of Pennsylvania, countered to a Maclean’s reporter outside his caucus’s weekly luncheon. It was Casey who preternaturally had announced that it didn’t matter whom Trump nominated—he would be against it.

“Have you ever met Judge Kavanaugh?” Casey was asked.

“Many Trump voters want there to be a check on the president’s powers,” Sen. Richard Blumenthal, Democrat of Connecticut, deposed to Maclean’s, though this desire is sometimes difficult to discern during the president’s campaign rallies amid the shouting of “Build the wall!” and “Lock her up!” And Sen. Chris Coons, Democrat of Delaware, said that he would press for Kavanaugh’s views on the limits of presidential power—if indeed he thinks there should be any limits at all.

“I think it’s a damn shame that people spend millions of dollars on a campaign for a Supreme Court justice,” griped Sen. Doug Jones, Democrat of Alabama, who raised more than $9.8-million to win his seat last December. But this is what Trump vowed to do on the campaign trail, and now the chickens and the checks and the balances were coming home to roost.

“The President shall nominate . . . Justices of the Supreme Court,” says The Constitution of the United States.

“Promises Made, Promises Kept,” crowed Sarah Palin from Alaska, boiling it all down to a tweet.

And while all this was going on back in Washington, the promise-keeper was on Air Force One for a day-flight to Europe, where he will dun the deadbeat Albanians and Portuguese and Luxembourgeois to pay for their tranche of the stale NATO torte, and where he may just ask Vladimir Putin whom he should nominate the next time there is an opening on the Supreme Court.

“I have NATO, I have the U.K., which is in somewhat turmoil, and I have Putin,” the president said before embarking. “Frankly, Putin may be the easiest of them all who would think? Who would think?”