Allen Abel in Washington: Spring means baseball and guns, and those U.S. obsessions were both on display in Trump's White House Monday 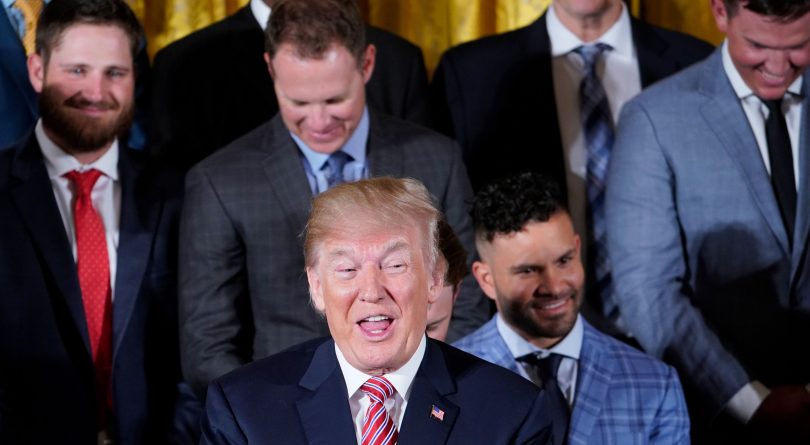 US President Donald Trump speaks during an event in honor of 2017 World Series Champion Houston Astros in the East Room of the White House on March 12, 2018 in Washington (MANDEL NGAN/AFP/Getty Images)

Opening Day is just around the corner, the cherry trees are budding at Nationals Park, (most of) the World Series champion Houston Astros are in the East Room of the White House, and a nimrod who calls himself Zackattack784 has posted this on the online forum of the Pennsylvania Firearm Owners Association:

This is my fifth year as a baseball umpire and I love the job and the kids. As we all know, some parents can get a little rowdy and/or obnoxious. Well I just got an email from the league about a parent who was kicked out of the league for following an umpire back to his car and threatening him. Considering some of the areas I umpire I feel that carrying is probably in my best interest.

Obviously, deep concealment is a necessity. I just recently purchased a pocket holster for my Sig P238 and was going to pocket carry it in my right front pocket when it dawned on me, what if I get hit with a foul ball there? I can’t carry in my back pocket because it isn’t deep enough and the grip can protrude slightly when I bend over.

Do you think it’s a bad idea to carry in my right front pocket? In my four years I’ve been hit only once there (and I stopped keeping my phone there as a result). I don’t think a ball hitting the gun would be enough to set it off but I’m not sure it’s worth the risk . . .

In Washington and across the land, spring is the season for America’s twin national pastimes—fastballs and firearms. So here was Donald Trump on Monday afternoon, lauding a truly remarkable ball club that is far more diverse than his own cabinet, just hours after releasing a policy statement that calls for weaponizing teachers but not for preventing peanuts aged less than 21 from acquiring a licence to kill.

“On 18 to 21 Age Limits, watching court cases and rulings before acting,” Trump tweeted. “States are making this decision. Things are moving rapidly on this, but not much political support (to put it mildly).”

“Very strong improvement and strengthening of background checks will be fully backed by White House,” the president added.

READ MORE: Donald Trump has more in common with Winston Churchill than you think

“If schools are mandated to be gun free zones, violence and danger are given an open invitation to enter,” Donald Trump reasoned Monday, just as a woman who identified herself as “seniorshooteress” had posted on the Texas CHL (Concealed Handgun License) Forum wondered:

I have two grandsons that play in little league baseball. The playing field isn’t anywhere near a school. Is this still considered a ‘sporting event’ and I can’t carry or does “sporting event” mean inside a stadium? I know if they play on school property I can’t carry. Would like to know before I go to one of their games

The answer, another contributor responded, can be found in the Texas criminal code, namely that:

“Almost all school shootings are in gun free zones,” corroborated Donald Trump in his Monday twitterfest. “Cowards will only go where there is no deterrent!”

Lack of deterrence likely played a role in many episodes in America’s long twinning of baseball and bullets, such as when Eddie Waitkus, the popular first baseman of the Philadelphia Phillies, was shot in the chest, seriously but not fatally, by a deranged female fan in 1946 (he was back in the lineup that season), and when Billy Jurges of the Chicago Cubs was plugged in the arm by a jilted lover in 1932 (he missed only a dozen games), and when Lyman Bostock of the California Angels was killed in 1978 by a shotgun blast fired by the jealous ex-husband of a woman he had met only 20 minutes before.

(If you’re keeping score at home, there is much more. On the Fourth of July, 1950, a boy who had found a loaded handgun in New York’s Central Park fired off a celebratory round from a rooftop near the Polo Grounds, home of the baseball Giants. The slug penetrated the skull of a fan named Donnelly inside the grandstand, killing him instantly. The game continued and the Giants beat the Brooklyn Dodgers, 5-4. The boy served two years in the juvenile pen. Last September, a woman attending a Cardinals game at Busch Stadium in St. Louis suffered a grazing wound to her elbow from a slug fired from a few blocks away.)

Contrast this all-American carnage with the superior courage and resilience of the people of Houston last summer as they were swept into the biblical floodwaters of Hurricane Harvey. And the grit of the ingenue Astros—the worst team in the major leagues only a few years before—when they won their first world championship by prevailing in the cauldrons of Yankee Stadium, Fenway Park and Dodger Stadium.

“I want to thank every member of the Astros team who spent time with those displaced in shelters,” Trump said of the 2017 champions, many of whom who were sporting a full-length beard befitting a 19th-century Garfield, Harrison or Hayes. “You held food and supply drives all over Texas and beyond, and gave millions and millions of dollars of your salaries. I know you’re doing pretty damn well. You’re going to be doing even better now. Boy, would I like to be—can I be your agent? “

José Altuve, the Astros’ incomparable Venezuelan second baseman, took part in the ritual, as did the team’s white regulars and its two African-American players. Among a handful of boycotters were now-retired slugger Carlos Beltrán and shortstop Carlos Correa, both of whom were born in Puerto Rico, where Trump does not have much political support (to put it mildly).

“A couple of guys had family issues,” the team’s owner, Jim Crane, purported to reporters afterward.

For Trump, a military-school slugger as a teenager despite his bone-spurred heels, the presence of the Astros provided a welcome counterpoint to the snub by the Golden State Warriors, who were “disinvited” by Trump after declaring that they would not walk into a Trump White House under any circumstances. The National Basketball Association champions were in Washington two weeks ago, substituting a visit with local children to the National Museum of African-American History and Culture for the rote rituals of the East Room.

While most of the Astros kept a low profile on Monday—only outfielder Josh Reddick spoke a few homilies to reporters—their presence, like that of the Stanley Cup champion Pittsburgh Penguins last October, added a modicum of sportive legitimacy to the Trump presidency.

Never one to bypass an opportunity to congratulate himself, Trump told the baseballers that “I just want you to know your country is doing fantastically well. We had one of the best economic days in our history on Friday, the numbers were announced. We’re back on track and we’re not letting the world take advantage of us anymore.”  And, espying the attendance at the ceremony of Rep. Kevin Brady from the Houston suburbs, principal architect of the corporate and income-tax cuts that were enacted at Christmas, he asked aloud:

“Kevin, are we going for an additional tax cut? Are we going to do a phase two? Phase two…we’re actually very serious about that Kevin.”

The White House insisted Monday that the president still is in favour of raising the minimum age for firearm purchases to 21—Congress is the impediment, press secretary Sarah Huckabee Sanders insisted, not the Chief Executive. But it gave no indication whether or not Trump will heave out the first horsehide at Nats’ Park on April 5, or if he will be spending that afternoon at the Pyongyang Coliseum instead.

Trump, who professes to be an avid ball fan in general and a New York Yankees aficionado in particular, did not attend the Washington opener in 2017, deigning not to perpetuate a tradition that stretches back to 1910 and the administration of William Howard Taft. (He has not made any public appearances in the District of Columbia since his inauguration.)

With or without The Donald, big-league ball will return to the nation and its capital in just two weeks, luring millions of fans to root, root, root for the home team, stand for the seventh-inning stretch, and get the hell out of the firing line when someone yells, “Kill the umpire!”