Are Trump's 'Made in USA' hats really made in USA? 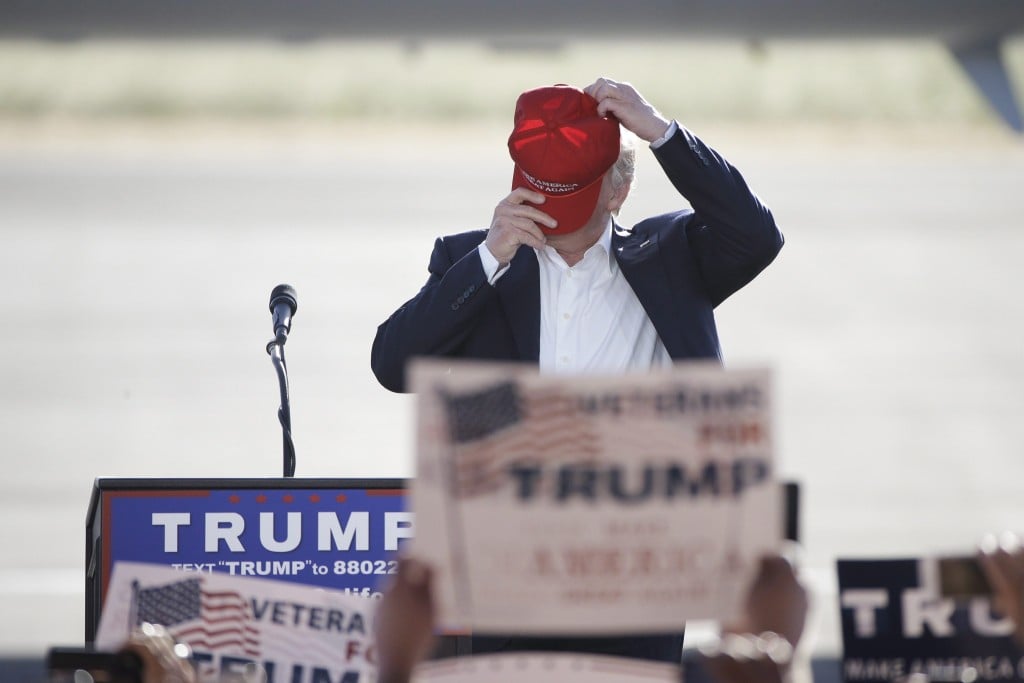 The iconic, baseball-style hats are indeed stitched together at a small factory in the Los Angeles area. But at least one of the hats in a small sample tested by AP and an outside expert did not contain the specific type of American-made fabric the hats’ manufacturer insists his factory always uses to make each one.

The true origin of the fabric in that hat remains a mystery – whether U.S.- or foreign-made and by whom – and a striking example of how difficult and murky it can be to verify something is actually “Made in USA.” The Republican presidential candidate has made it a cornerstone of his campaign that U.S. companies and individuals should aim for that standard to bring back American jobs, even if it means paying more.

Informed of the AP’s findings, Trump said any misrepresentation would be unacceptable. “I pay a good price for that hat. If it’s not made in the USA, we’ll bring a lawsuit.”

The AP review included a microscopic analysis of five hats bought from Trump’s campaign website, which showed the fabric in one was of a different type than that made by the supplier the manufacturer told the AP provides all his hat fabric.

In addition to the fabric analysis, two of the manufacturer’s employees, including a top sales agent, said the hats’ fabric, bills and stiffeners were imported.

The factory’s owner, Brian Kennedy of Cali-Fame of Los Angeles Inc., said the two employees were wrong, but he refused to explain the fabric discrepancy. Federal law requires that items labeled “Made in USA” be made from materials “all or virtually all” from the United States.

On a broad level, the tale of Trump’s hats shows the challenge of revitalizing U.S. manufacturing, which has been ravaged by cheap competition from overseas. Trump has accused Asian countries of unfairly manipulating their currencies to boost exports.

Labour costs in Asia are so low that hats or other clothing can cost less than half the price of products made in the United States. Asian fabric prices are also lower, though less dramatically. While Trump has tried to get Made in USA hats for his campaign, knockoffs of those hats, clearly made in China, do a brisk business for other vendors. And Trump’s private companies and the clothing line run by his daughter, Ivanka, routinely sell clothes and other products made in China and other Asian countries.

Trump has warned Ford Motor Co. that he would place a 35 per cent tax on cars sent to the U.S. from a planned plant in Mexico, and he has pledged to “get Apple to start building their damn computers and things in this country.”

“All it takes is a commitment to winning and making ‘Made in America’ a badge of honour like it used to be,” Trump wrote last year.

But the Trump campaign’s experience shows how difficult it can be to be utterly certain of a product’s provenance. Trump told the AP that his staff had visited Cali-Fame’s factory and reviewed paperwork guaranteeing the hats qualified for Made in the USA labeling. “It was very important to us that these hats be made in the USA,” he said.

The fabric tells a complicated tale.

Kennedy, the factory owner, provided the AP with a copy of a certificate dated March 24, 2016. It shows the purchase of 1,488 yards of U.S.-origin, red polyester-cotton blended fabric, called Saxtwill, from Carr Textile Corp. of Fenton, Missouri. Kennedy later provided copies of three other certificates from Carr Textile, dated September 2015, for components of black and white hats of U.S. origin.

Kennedy declined to comment further after the AP told him that a microscopic analysis of the fabric in a red cap the AP purchased directly from Trump’s campaign website did not match the red Saxtwill material that the AP obtained directly from Carr Textile. He said providing any further detail would reveal proprietary information.

To do the microscopic analysis, the AP obtained samples directly from Carr of the same red polyester-cotton blended fabric that Kennedy said was in the hats: one type imported and one U.S.-made. The AP asked Deborah Young, a professor of textiles and clothing at the Fashion Institute of Design and Merchandising in Los Angeles, to compare two Trump hats that the AP had purchased from the campaign website with the fabric samples. The AP did not identify the fabric samples to prevent bias.

Her conclusion: The material in one Trump hat was inconsistent with either Carr sample. The pattern of the weave was noticeably different, later confirmed by the AP using a school-grade microscope: All Carr-made Saxtwill fabric is a 2/1 weave; the other Trump hat was a 3/1 pattern weave.

“I am completely confident of this outcome,” Young said. “There’s no way this hat was made out of either (Carr) sample.”

The analysis was not able to determine where the fabric in that hat actually came from.

Young said the other “Make America Great Again” hat that the AP had also purchased from Trump’s campaign could have come from either the U.S.-made Carr fabric, from Carr’s cheaper imported fabric, or from an entirely different source.

After receiving Young’s opinion, the AP bought an additional three hats from the Trump campaign for review. Those were also compatible with either Carr’s Saxtwill or the cheaper fabric that Carr imports.

In addition to the fabric analysis, two of Cali-Fame’s employees, Andy Meade and Angela Olague, told the AP and a product distributor, separately, that the hats were made from imported fabric and other components.

The AP asked Kevin O’Brien, the president of Ethix Ventures Inc. of Boston, a distributor specializing in U.S.-produced, sweatshop-free merchandise, to call Meade, Cali-Fame’s top sales agent, on the AP’s behalf to ask about the company’ hat prices and the origin of the hats’ materials. The AP asked O’Brien to call so that the company’s employees would respond as they would to a regular industry customer.

An AP reporter separately called Olague in the company’s sales department to ask which materials were imported, disclosing that he worked for The Associated Press when asked.

The hats “are made in the USA, but all the materials are not,” Olague told the AP of the company’s Made in America product line. Pressed further, she said the factory could hypothetically produce hats from American-made fabric – but only if the customer supplied domestic fabric with the same specifications of the material Cali-Fame used.

Meade and Olague declined subsequently to speak to the AP. Kennedy, the factory owner, said the two employees had their facts wrong.

The Federal Trade Commission considers a product made in the U.S. only when “all or virtually all” the product is U.S.-made. It defines that as cases where “all significant parts and processing that go into the product are of U.S. origin.”

The FTC generally requires Made-in-USA labeled products to be assembled or “substantially transformed” in the U.S. and to contain “negligible” foreign content.

Under the FTC rules, if a hat were made from imported fabrics, the maker could comply with the law by using a different, more qualified label, such as “Made of U.S. and imported fabric” or “Made in U.S. of imported fabric.”

The FTC can punish violators in an administrative process that prohibits unfair or deceptive practices. The agency can and sometimes does investigate such cases when it receives a formal complaint.

Through a spokeswoman, the FTC declined to comment on Trump’s hats specifically, referring the AP to its guidelines requiring all significant components to be domestically made.

State law also regulates Made in USA claims. Under California law, 95 per cent of a “Made in the USA” product’s value must come from U.S. sources unless key components are unavailable domestically. Foreign fabric is often in greater supply, but domestic fabric is available.

Ironically, even as the Trump campaign strives to provide Made in USA hats, unofficial knock-offs of Trump hats, made in China and not endorsed by Trump’s campaign, are widely available.

Trump’s campaign sells its hats for $25 to $30 each on its website. It was unclear how many it has sold, but the campaign has paid Cali-Fame nearly $1.5 million for hats through the end of last month. The knockoffs, sometimes worn by Trump supporters at his rallies, can be had for as little as $6 on Amazon.com.

Trump acknowledged there appeared to be a demand for the cheaper, foreign hats. He said he was unsure whether supporters buying those hats ever checked the tags. “I don’t know if they know,” he said.

Trump said his organization has been writing letters trying to force the knockoff makers to stop.

“Maybe we’ll end up suing companies,” he said. “Who knows where they are?”