At his farewell presser, Obama and the media skirmish one last time

Reduced, at the end of eight years in office, to the vain Hope that nothing will Change when Donald Trump takes charge on Friday, Barack Obama offered his final words to the American public Wednesday in a news conference that turned into a defensive and tendentious post-Farewell Address farewell address.

“I’ve had some off-the-record conversations with some journalists where they said, ‘Okay, you seem like you’re okay, but really, really, what are you thinking?’ ” Obama confided on the 2,921st (and next-to-last) afternoon of his presidency. “And I’ve said, ‘No, what I’m saying really is what I think. I believe in this country. I believe in the American people. I believe that people are more good than bad.’

“I believe tragic things happen, I think there’s evil in the world, but I think that at the end of the day, if we work hard, and if we’re true to those things in us that feel true and feel right, that the world gets a little better each time.

“This is not just a matter of ‘No Drama Obama’—this is what I really believe. At my core, I think we’re going to be okay.”

MORE: Jonathan Chait on what will survive of Obama’s legacy

The 44th president spoke in the crammed West Wing briefing room—it has 49 chairs and a couple of dozen desks for about 200 regular reporters—that the Trump team had threatened to cleanse of the duly-credentialed vermin who, in the new administration’s view, paper the walls of America with biased, leftist, unpatriotic, fact-checked news.

“You’re not supposed to be sycophants, you’re supposed to be skeptics,” Obama told reporters. His remarks came a few hours after Trump spokesman Sean Spicer—asked why not a single Hispanic-American has been nominated for a high-level position in the new administration—responded with a promise that “you’re going to see different eth-uh-nicities, different genders.”

Leaving the White House untainted by personal scandal but with the world no less fraught and the nation even more fractured than when he moved in, the first African-American President accepted that he had failed to achieve a two-state solution for Israel and the Palestinians. Obama despaired that, given Trump’s tough talk on West Bank settlements and moving the U.S. embassy from Tel Aviv to Jerusalem, he cannot see “how this issue gets resolved in a way that maintains Israel as both Jewish and a democracy.” 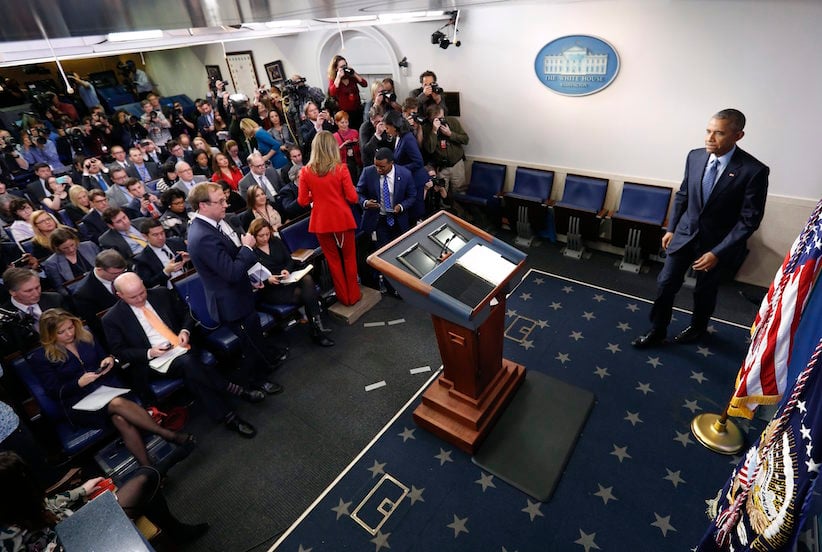 Obama brushed aside suggestions that his eleventh-hour freeing of the imprisoned leaker Chelsea Manning sends a message of tolerance for other soldiers who might contemplate the betrayal of military secrets.

“Let’s be clear, Chelsea Manning has served a tough prison sentence,” Obama declaimed after commuting the final three decades of Manning’s 35-year prison term. “So the notion that the average person who was thinking about disclosing vital, classified information would think that it goes unpunished, I don’t think would get that impression from the sentence that Chelsea Manning has served.”

(“He’s going to be president for another two days,” Sean Spicer shrugged when asked about the Manning case. “He has the right to do whatever he wants.”)

Obama would not comment on the planned and pouty boycott of Friday’s ceremony by at least 50 Democratic members of the House of Representatives, all of whom must stand for re-election in less than 22 months. (Not a single senator so far has joined them.)

Obama made it clear that his post-presidency will not mimic that of his predecessor, George W. Bush, who has largely withdrawn from political life and public comment, and that he will speak out when he feels that fundamental rights are under attack by Trump or anyone else.

“There’s a difference between that normal functioning of politics and certain issues or certain moments where I think our core values may be at stake,” said the President, who leaves the Oval Office with a 60 per cent public approval rating, compared to Bush’s 34 per cent in January 2009. “I put in that category if I saw systematic discrimination being ratified in some fashion. I put in that category explicit or functional obstacles to people being able to vote, to exercise their franchise. I put in that category institutional efforts to silence dissent or the press. And for me at least, I would put in that category efforts to round up kids who have grown up here and for all practical purposes are American kids and send them somewhere else, when they love this country.”

“We’re the biggest kid on the block. And I think it is right and appropriate for a new president to test old assumptions and re-examine the old ways of doing things. But if you’re going to make big shifts in policy, just make sure you’ve thought it through, and understand that there are going to be consequences, and actions typically create reactions, and so you want to be intentional about it. You don’t want to do things off the cuff.”

Barring a major international crisis before 11:59 a.m. on Inauguration Day, the next words that the American public will hear from their chief executive will be Donald Trump’s inaugural address, which his office predicts will last no more than 20 minutes and will be heavy on substance and short on eloquence.

“It is a Trump draft,” mouthpiece Spicer revealed. “This is something very personal to him, written by him, and edited by him.”

Donald Trump, Spicer said, “has been in awe of the awesomeness of our country.”

The 45th president, the spokesman predicted, “is going to be judged more on action and success than soaring rhetoric. The voters are going to demand that change has occurred and that business as usual is over.”