At his final State of the Union, Obama breaks the fourth wall

At his last annual address to Congress, Barack Obama stared down Americans and took aim at fear—in the form of Donald Trump 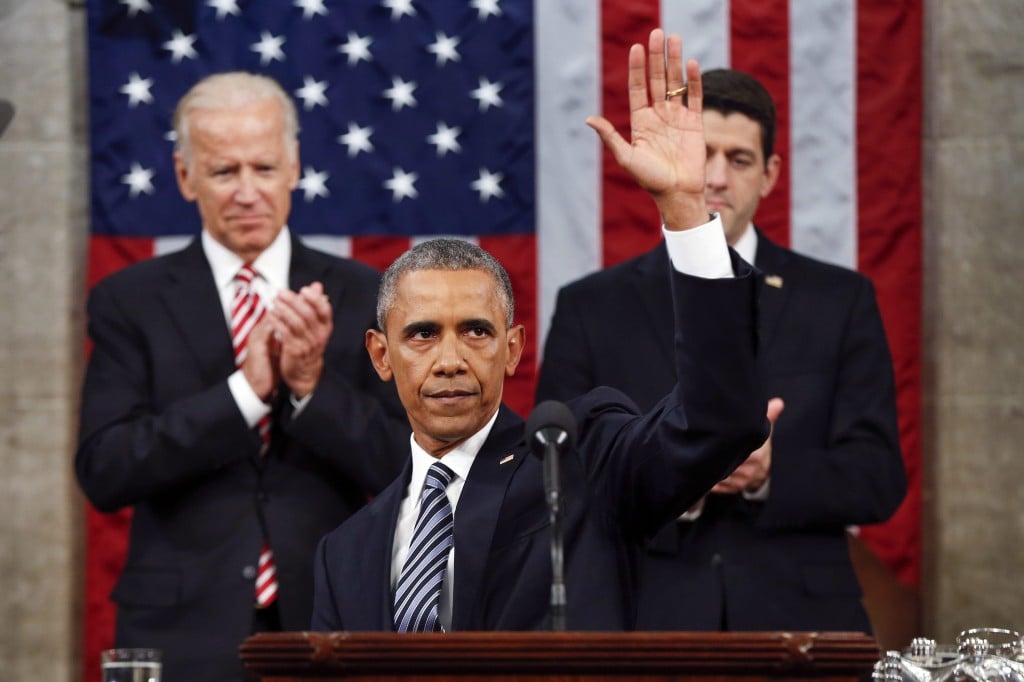 President Barack Obama waves at the conclusion of his State of the Union address to a joint session of Congress on Capitol Hill in Washington, Tuesday, Jan. 12, 2016. (AP Photo/Evan Vucci, Pool)

The American State of the Union address is a well-polished ceremony. At the beginning of every year the President comes before a joint session of Congress to announce that the “Union is strong.” He celebrates his administration’s recent victories, announces new programs, throws out a bilateral bone or two, and scores a few partisan points. His Vice President sits behind him, unfailingly laughing at the punch lines, frowning at the challenges, and nodding throughout. The Speaker of the House sits next to the Vice President. He or she will join the Greek chorus if he is a member of the President’s party, or if not they will sit sternly, carefully avoiding a smile or applause.

The press lean forward, above in the gallery, scrutinizing the proceedings like shamans poking goat entrails. How long was the speech? How many ovations were there? Who applauded against party ranks? How often did the President say “jobs” or “security”? Who were the First Lady’s guests?

But there are rarely any surprises. No genuinely new information is shared. We already know the government’s policy in Afghanistan, how many jobs were created last year, and which sector of the economy is hurting the most. The White House telegraphs the main points well in advance, and even if they didn’t, most observers would be able to write a fairly accurate version of the script beforehand.

Nonetheless, the traditions must be observed, and on the surface, this year was no exception.

Related: A transcript of Barack Obama’s State of the Union address

Last night was Obama’s eighth and last State of the Union. In his first joint address to Congress in 2009, unemployment was twice what it is today, and the Dow Jones was half. America was reeling from the sub-prime crisis, and not surprisingly, the newly elected President focused on the economy. The President earned his first ovation with the promise that “we will rebuild, we will recover, and the United States will emerge stronger than before.” Even though America was still hip-deep in Iraq and Afghanistan, he didn’t even raise security issues until 45 minutes in. At that point, a confident and resolute Obama announced that he had already signed the order to close the military prison at Guantanamo Bay.

Not everything goes according to plan.

In his last State of the Union, Obama once again raised Guantanamo. This time he was less resolute, and merely promised to keep working towards its closure. He again emphasized the economy. And as is traditional there were references to new programs (additional funds to fight cancer), a few partisan jibes (on climate change), and a call for more bipartisan cooperation (on electoral reform).

But behind those talking points, the speech broke from its usual form. This was less a State of the Union, and more of a sermon. There were fewer applause points; Vice President Biden cheered less and looked thoughtful more. The President didn’t lay out a new legislative agenda; instead, he asked some big questions.

“Will we respond to the changes of our time with fear, turning inward as a nation, and turning against each other as a people? Or will we face the future with confidence in who we are, what we stand for, and the incredible things we can do together?”

This was the heart of the speech, and it was directed at a politician who wasn’t in the room: Donald Trump. Obama broke from the script here, almost like an actor breaking the fourth wall. He looked directly into the cameras and at the 42 per cent of Americans who would vote for Trump and said: “As frustration grows, there will be voices urging us to fall back into tribes, to scapegoat fellow citizens who don’t look like us, or pray like us, or vote like we do, or share the same background. We can’t afford to go down that path.  It won’t deliver the economy we want, or the security we want, but most of all, it contradicts everything that makes us the envy of the world.”

This was Obama looking at the polls, and realizing the joke candidate is no longer a joke, and hoping that it is not too late (nor too early) to define November’s ballot question. Do you want hope, or do you want fear?

More from Scott Gilmore: Why Donald Trump can’t fight the arc of history

Eight years ago, Americans chose hope. And eight years later, in the aggregate, this choice paid off. There are fewer soldiers overseas, more jobs, and stronger markets. But buried in those rosy numbers are a lot of grim stories. The Obama years have not been good to everyone, and even among those who did well on paper, many are nonetheless more afraid of terrorism, crime, and foreign competition. Those are the people lining up in Iowa to listen to Trump, and those are the people Obama was talking to last night.

Sadly, most of them weren’t listening to the President’s sermon. Trump’s congregation isn’t on CSPAN—they’re following him on Twitter, where he provided his own assessment of the night: “really boring, slow, lethargic—very hard to watch.” That review might have described Obama’s last seven State of the Union Addresses, but not this one. This speech was the opening salvo in what may turn out to be the one of the most interesting electoral battles in years: America vs. Trump.

FILED UNDER: Barack Obama Editor's Picks state of the union State of the Union 2016