At Trump's speech to Congress, an audacious call for hope 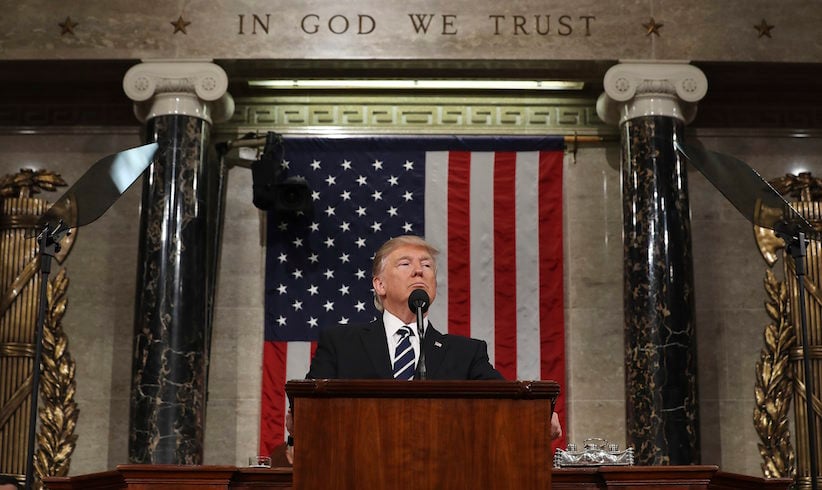 It was the elevated lectern from which Franklin D. Roosevelt proclaimed that “the American people in their righteous might will win through to absolute victory.” From which Nelson Mandela spoke of “the fact of the human condition that each shall, like a meteor, a mere brief passing moment in time and space, flit across the human stage and pass out of existence.” From which Winston Churchill announced that “sure I am that this day—now we are the masters of our fate.” From which Douglas MacArthur sighed, “I now close my military career and just fade away.” From which John F. Kennedy prophesied that “I believe that this nation should commit itself to achieving the goal, before this decade is out, of landing a man on the moon and returning him safely to the Earth.” From which one of those men, Buzz Aldrin, home from the Sea of Tranquility, reported that “our steps in space have been a symbol of this country’s way of life as we open our doors and windows to the world.” From which Harry S. Truman discerned that “The Soviets’ hostile policies have awakened stern resistance among free men throughout the world.” From which Lyndon B. Johnson declared that “we do not intend to live in the midst of abundance, isolated from neighbours and nature, confined by blighted cities and bleak suburbs, stunted by a poverty of learning and an emptiness of leisure.” From which Barack Obama warned that “anyone who tells you otherwise, anyone who tells you that America is in decline or that our influence has waned, doesn’t know what they’re talking about.”

It was from that very lectern from which a suddenly cuddlesome Donald J. Trump spoke Tuesday night of “true love for all people” and pleaded with a divided, detested Congress to summon “the courage to share the dreams that fill our hearts.”

Swivelling from hateful racist to Harlequin romantic—with a few characteristic relapses to describe ISIS as “a network of lawless savages” and to promise to build a “great, great wall” on the Mexican border—the 45th president declared that “the time for small thinking is over. The time for trivial fights is behind us.”

“From now on, America will be empowered by our aspirations—not burdened by our fears,” Trump said, a radical course-change from the spectral rhetoric of other major speeches he has written, or has been given to read.

In his first State of the Union-style oration to a joint session of the U.S. Senate and House of Representatives—the ultimate province and privilege of presidents, prime ministers and popes—the erstwhile Manhattan playboy and improbable president attempted to strike a less dystopian chord than he did in his “American carnage” inaugural address in January, or in his even darker acceptance speech at last summer’s Republican National Convention in Cleveland, with its macabre exaggerations of jihadist terror, economic stagnation, and blood in the streets.

“In 2016, the earth shifted beneath our feet,” Trump said Tuesday night, on the eve of the anniversary of the “Super Tuesday” primaries that vaulted him, astonishingly and permanently, to the front of the Republican field. “The rebellion started as a quiet protest, spoken by families of all colours and creeds—families who just wanted a fair shot for their children, and a fair hearing for their concerns.

“But then the quiet voices became a loud chorus, as thousands of citizens now spoke out together, from cities small and large, all across our country.

“Finally, the chorus became an earthquake—and the people turned out by the tens of millions, and they were all united by one very simple, but crucial demand, that America must put its own citizens first … because only then, can we truly MAKE AMERICA GREAT AGAIN.”

In an email to supporters just before he thrust himself, beaming and back-slapping like a seasoned pol, into the jammed House chamber, Trump promised an address centred on “optimism, hope, and love for the greatest country in history.” Leaked details of an interview session with network television anchors hinted at his desire to establish a path toward citizenship for millions of law-abiding illegal border-jumpers, a precipitous and mind-blowing conversion to the sort of “amnesty”—anathema to millions of Tea Party conservatives—that derailed Sen. Marco Rubio’s path to the presidency in 2016.

“More than one in five people in their prime working years are not working. We have the worst financial recovery in 65 years.

“Everything that is broken in our country can be fixed. Every problem can be solved. And every hurting family can find healing, and hope.”

Already, the nation, planet, and solar system—not to mention the seven Earth-like satellites orbiting the star TRAPPIST-1—had endured forty days and forty nights of The Donald’s vacuous gaggles, mendacious brags, vainglorious tweets and virulent proclamations. Yet, even before his address to Congress and the wider nation began, Trump’s historically abysmal approval ratings had clawed their way back toward fifty-fifty, and more than three-fourths of Americans of both parties were expressing their agreement with the statement: “Donald Trump will bring real change to Washington.”

Whether that change will be cathartic or catastrophic is a mote in the eye of each person affected.

“Nobody knows the system better than me,” nominee Trump had bragged in Cleveland, “which is why I alone can fix it.” But the president has no vote in either house of Congress, where he will need to combine Republican unanimity with Democratic betrayals to turn his ambitious agenda into law.

No member broke the hall’s decorum during the speech by shouting “You lie!”—as South Carolina’s Joe Wilson had during Barack Obama’s first bicameral address—though, habitually, Trump has shown little respect for the truth. (Some Democrats audibly chuckled at his promise to “drain the swamp” of Washington lobbyists, and many groaned at his announcement of the formation of an office of Victims Of Immigration Crime Engagement.) Adhering to tradition, even Rep. John Lewis and Sens. Bernie Sanders and Elizabeth Warren politely applauded his entry.

But in a week and a presidency in which even a young American-born citizen whose name is Muhammad Ali, Jr. was detained at the U.S. border, it was left to George W. Bush—of all people—to break through the Republican Party’s cone of silence to condemn Trump for “the racism and the name-calling.” 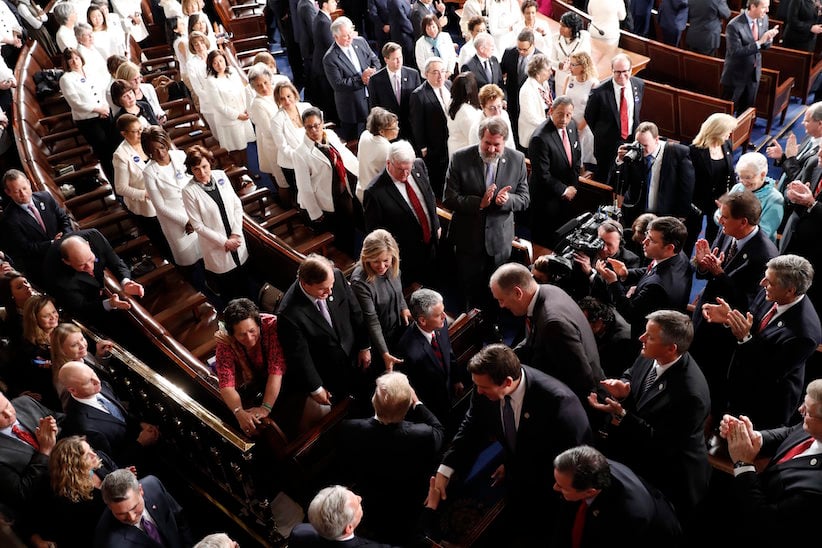 In a show of sisterly solidarity, female members of the Democratic minority—many of whom had boycotted Trump’s inauguration—wore white jackets and skirts Tuesday night. Not to be outdone, male members of the Republican majority displayed their unity by wearing dark suits.

But the GOP’s theatrical display of comity—dozens of ritual standing ovations and bellows of approbation—barely masked an undressed emperor. An hour before Trump began his oration, Ed Royce, the Republican chairman of the House Foreign Affairs Committee, dismissed the novice president’s proposal to eviscerate spending on foreign aid and international relations, writing that “I am very concerned by reports of deep cuts that could damage efforts to combat terrorism, save lives, and create opportunities for American workers. The committee will thoroughly review the administration’s foreign affairs budget request when it’s made available to Congress.”

Trump’s speech included a shoutout to Justin Trudeau (the only foreign leader mentioned), an appeal that the U.S. immigration system move to a Canadian-style, merit-based formula, an avowal of strong support for NATO, kudos to Black History Month and condemnation of the vandalization of Jewish cemeteries, and no mention whatsoever of Syria, or of Russia and its brawny president-for-life.

“Free nations are the best vehicle for expressing the will of the people—and America respects the right of all nations to chart their own path. My job is not to represent the world. My job is to represent the United States of America. But we know that America is better off, when there is less conflict—not more.”

Democrats bolted en masse from the chamber as soon as the speech concluded. Republicans swarmed the president and supporters applauded from the rafters. And Supreme Court Justice Anthony Kennedy turned to his Chief, John Roberts, and was seen to mouth the word “Wow.”