Barack Obama appeals to the hope and optimism of 2004

Addressing the 2016 Democratic Convention, Obama kept returning to the ideals of his 2004 speech in Boston 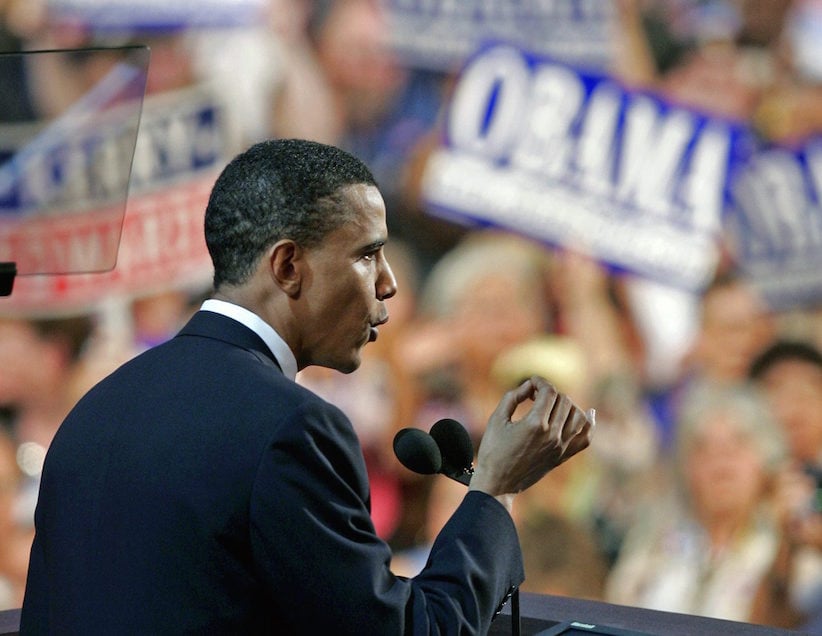 On July 27, 2004, then-senator Barack Obama delivered a galvanizing speech that catapulted him onto the national stage and inspired a generation of Democrats. On July 27, 2016, President Barack Obama offered a vigorous defence of that 2004 speech, and an argument for why he is more optimistic about America’s future than ever.

One of the key themes of Obama’s 2004 speech was a reclamation of patriotism for the left. In 2004, Obama presented a vision of what America could be, a country that aspired to grand ideals and was greater than the sum of its parts:

Tonight, Obama kept coming back to that 2004 speech. He explicitly referenced it in his introduction and often used similar language: “I see Americans of every party, every background, every faith who believe that we are stronger together: black, white, Latino, Asian, Native American; young and old; gay, straight, men, women, folks with disabilities,” he said tonight.

MORE: Allen Abel on the audacity of scope from the convention

In 2004 Obama made an appeal to American exceptionalism that was more unifying, if no less nationalistic, than the one Trump has been making for months. Tonight, Obama directly challenged Trump, saying: “America is already great.  America is already strong.  And I promise you, our strength, our greatness, does not depend on Donald Trump.”

On Twitter, Donald Trump was quick to offer a counter-narrative of American greatness, and an appeal to those who feel left behind by the Obama administration:

Our country does not feel ‘great already’ to the millions of wonderful people living in poverty, violence and despair.

There was one marked difference between the 2004 speech and the 2016 one. Tonight, Obama wasn’t just defending American exceptionalism; he was defending American democracy. “Democracy works, but we gotta want it—not just during an election year, but all the days in between,” he said.

Both tonight and in 2004, Obama offered a vision of American greatness based on collective achievement instead of the strength of a single leader. On both nights the strongest part of the speech was his appeal to hope. In 2004, he said:

“It’s the hope of slaves sitting around a fire singing freedom songs; the hope of immigrants setting out for distant shores; the hope of a young naval lieutenant bravely patrolling the Mekong Delta; the hope of a millworker’s son who dares to defy the odds; the hope of a skinny kid with a funny name who believes that America has a place for him, too.”

Tonight Obama asked his supporters, who believed his promises of a more hopeful future and twice propelled him to the White House, to support his old rival Hillary Clinton:

“Time and again, you’ve picked me up. I hope, sometimes, I picked you up, too. Tonight, I ask you to do for Hillary Clinton what you did for me. I ask you to carry her the same way you carried me. Because you’re who I was talking about 12 years ago, when I talked about hope. It’s been you who’ve fuelled my dogged faith in our future, even when the odds are great; even when the road is long.  Hope in the face of difficulty; hope in the face of uncertainty; the audacity of hope!”

For some, this speech will be enough. But for others on the left, particularly die-hard Bernie Sanders supporters, Obama’s heady promises of a better tomorrow will fall on deaf ears. During his speech tonight a protester yelled “No more TPP” and others held up anti-Trans-Pacific Partnership signs.

Tonight’s speech, no matter its similarities to the one delivered 12 years ago, will not have the same effect. The rise of increasingly siloed media companies means that as much as Obama’s speech will be celebrated by those on the left—already the Washington Post is calling the speech a “win” for Obama and Mother Jones is saying it “might just be his best”—it will be pilloried by those on the right.