Barack Obama makes a pitch for his legacy

It’s hard to know how well or badly this convention is going for the Democrats. It seems like they’re concentrating too much on unifying their base around Hillary Clinton, and not enough on reaching across the aisle to swing voters. For example, in Michael Bloomberg’s speech endorsing Clinton, he came off as almost a parody of what Hollywood thinks of as a moderate: someone who is socially liberal and fiscally conservative. (The fact that Democrats started cheering when he called Clinton a “sane, competent person” was a reminder that much of the Democratic base gets excited at the idea of moderation and compromise.) The tough-on-crime policies Bloomberg continued or instituted as mayor of New York, though they appeal to swing voters, are controversial among Democrats. So the convention so far seems like most Democrats are hoping to ignore issues like crime and terrorism—even though they could make a very plausible case that they can handle these issues better than Donald Trump would.

Clinton’s vice-presidential pick, Tim Kaine, signified how much the Democrats have changed since the 1990s, when they were obsessed with picking up white, working-class swing voters. Kaine was chosen because he’s a moderate Southern Democrat like Bill Clinton, the kind of guy who can theoretically appeal to those voters. But the pitch he made was based mostly on generic statements about his faith and general niceness. (He also seems to think, as American politicians often do, that being able to speak a language other than English is some kind of staggering achievement.) There were few heterodox policy opinions being thrown around here, and few attempts to deal with the concerns that have led to things like Trumpism and Brexit. The Democrats seem to feel they’re doing fine the way they are, and can win by re-assembling the Obama coalition from 2012, plus a few people who would vote for any other Republican but this one. 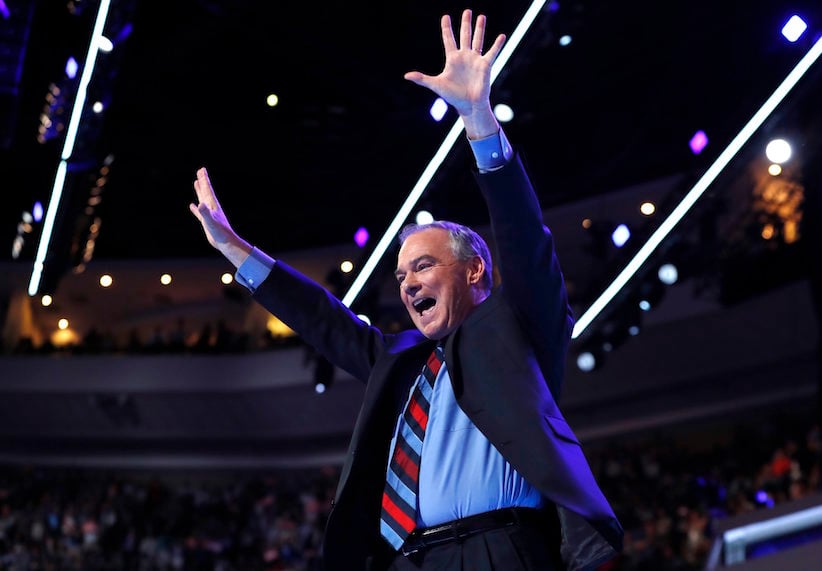 That sense of continuity was preserved in the most important speech of the night, which, of course, was President Obama’s—followed by a rather long film about what an awesome president he has been on everything that matters to Democrats. Unlike George W. Bush in 2008, who was so unpopular that he was considered a liability to his party, Obama looks set to end his presidency as a reasonably popular president, despite how divided his country is. That means Clinton—with whom he’s had his share of differences—will need his help and support to win. And Obama, for his part, will want to establish some kind of legacy after he leaves office.

Despite Obama’s relative popularity, there are a couple of things working against him when it comes to leaving his imprint on his party and his country, the way Ronald Reagan did (and Obama has talked about wanting to be the Democratic Reagan). One is that the Democratic wipeouts in the midterm elections of 2010 and 2014 means that there aren’t a lot of elected officials—in Washington or in the states—who were elected on his coattails. And the other, more important problem is that persistent pessimistic mood in the country, which the Republican convention ran on. Even if the majority of people like Obama personally, many are receptive to the message that things have gotten worse on his watch.

The speech was a sustained argument that America is now a better place than it was when he took over. He attacked Trumpism for being “pessimistic,” for painting what he (understandably) considers a wrong picture of his America and his presidency. Obama is sometimes mocked for using the phrase “that’s not who we are” too much; he seems sufficiently conscious of this that he tried not to say it exactly (much like Jerry Seinfeld used to try to say anything except “what’s the deal?”). But it does sum up how he—or any president—would view the possibility of being succeeded by someone who contradicts everything he stands for. If Trump wins, it’s a declaration that everything Obama did was a failure, or at least that a majority of Americans want to completely reverse what he did.

So of course he argued that Hillary Clinton would be a good successor. His speech seemed more effective than most of the other speeches at this convention so far—more conscious of the issues that are of interest to swing voters, more clever about reaching out to different demographics and age groups. (An ad-libbed line comparing Clinton to Ginger Rogers was aimed at TCM-watching old people everywhere.) That’s why most people, whether they support or oppose Obama, have to admit he’s more talented than most politicians. The speech foregrounded a lot of things that other speakers have tried to play down: he tried to say that there is no contradiction between protecting cops and protecting suspects’ rights, between diversity and traditional values. It’s important to say things like that, because Trump has built his whole campaign on insisting that everything is zero-sum, that people cannot keep what they have unless they keep other people from getting what they want.

It’s easy enough to reassure people that they can have it all, but Obama is one of the few speakers who has done it effectively. If Clinton can do it too, she will probably win. But then again, a lot of people so far haven’t been able to do it.