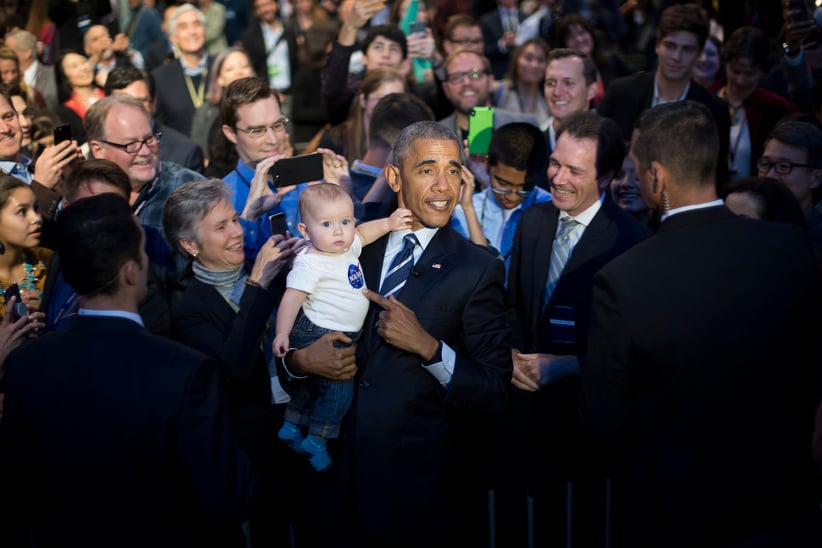 WASHINGTON — President Barack Obama likes to say that historians, not he, will evaluate his legacy with the perspective only hindsight can provide. Yet as he campaigns across the country for Hillary Clinton, Obama is offering his own first draft of the way he hopes his eight years in office will be remembered.

For Obama, the final stretch of the campaign has been a nagging reminder that his presidency is about to close, and an opportunity for self-reflection that the president has seized. After all, Obama’s chief argument for Clinton is that only by electing her over Donald Trump can his supporters protect his accomplishments.

“We have been busy, which is why I’ve got grey hair,” Obama told some 7,000 supporters at a rally for Clinton on Thursday in Florida.

Lest the country forget, he used his speech to revisit what he considers his greatest-hits list: 20 million Americans who have gained health coverage, unprecedented steps on climate change, the death of Osama bin Laden. He seemed particularly pleased to have spotted a road sign advertising $1.99-a-gallon gas, despite his naysayers’ predictions in 2008 that it would climb to many times that if he were elected.

Obama, who has put most of his to-do list on hold until after Election Day, planned to echo those themes Friday during a pair of rallies for Clinton in North Carolina — and again on Sunday and Monday in battlegrounds Florida, New Hampshire and Pennsylvania.

Until recently, Obama’s aides were reticent to even use the word legacy, and took to calling it “the L-word” instead. White House aides said that grew out of a sense of communal superstition, reinforced by frequent reminders from Obama and White House chief of staff Denis McDonough that there was plenty of unfinished business and no distractions would be welcome.

But as Inauguration Day grows closer, the White House has started working to frame Obama’s legacy for the public, through events designed to take stock of progress and a series of essays Obama has published about health care, economics and globalization. Obama was expected to pen more in-his-own-words pieces elaborating on legacy issues during his finals weeks in office.

To be sure, this year’s election has had no shortage of reminders of how deeply divided the U.S. remains, despite Obama’s hopes to “break the fever” by uniting Americans of all political and ethnic backgrounds. Even many Republicans who detest Trump have argued that it’s frustration with Obama’s failures that have enabled Trump’s staggering success.

At Obama’s rallies for Clinton, attended largely by die-hard Obama supporters whose enthusiasm for Clinton is in question, there’s a sense of nostalgia that has only recently started creeping in at the White House. As he did in 2008 and in 2012, Obama once again is facing tens of thousands cheering his name. Many are holding signs saved from his 2008 and 2012 campaigns.

Jen Psaki, the White House communications director, said returning to the campaign trail has given Obama an opportunity to see how Americans are digesting what the last eight years have meant for their lives. She said the reality of the campaign drawing to a close has been a poignant reminder that Obama’s successor will be inaugurated in less than 80 days.

“It gets realer the closer you get,” Psaki said.