Be warned: The Donald Trump effect will touch us all. 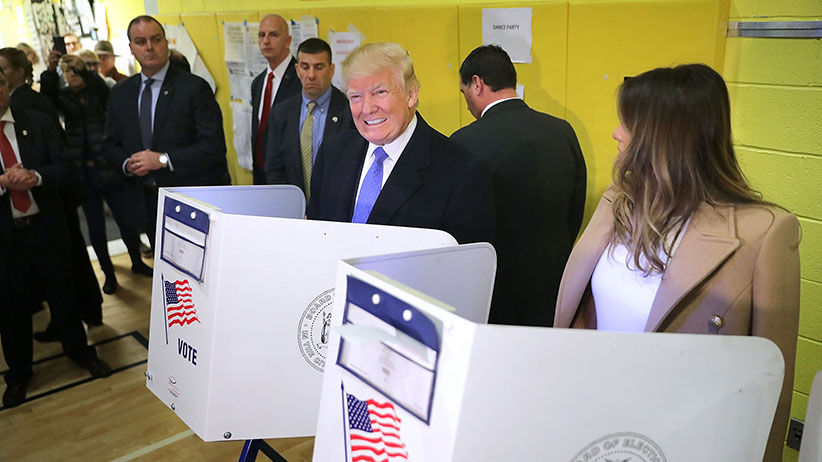 The most contentious, ill-mannered and astounding United States presidential election in modern history has finally come to a close. The race between Republican Donald Trump, who was elected 45th president of the U.S. this week, and his competitor Democrat Hillary Clinton plumbed new lows for political discourse and electioneering. Drawn by its perverse entertainment value, the campaign attracted the attention of Canadians in ways never before seen.

Unfortunately, the election’s conclusion does not mean an end to the histrionics that characterized the campaign south of our border. Canada cannot simply change the channel and move on to other diversions. With the ascension of Trump, the 2016 US election signals a profound shift in values with significance for the entire world. Foundational beliefs that have underpinned decades of global prosperity now face existential challenges. Trust in the institutions necessary for a functioning democracy has been threatened as never before. And accepted standards of political debate have been thoroughly debased. Can global prosperity and civility survive a Trump presidency?

OUR DEFINITIVE READ: The rise of Donald Trump

Free trade and immigration were once axiomatic to global growth. Between 1950 and 2007, global trade expanded at an incredible 6.2 per cent per year, spurring tremendous growth in incomes and leading to a worldwide reduction in poverty. More than goods moved about freely during this golden era; people did as well. Together the U.S., Canada, Australia and New Zealand welcomed nearly one million immigrants annually over this 57-year period. This free flow of human capital across borders was similarly crucial to rising productivity and incomes worldwide. This week’s election puts future growth in trade and immigration in peril.

Both Clinton and Trump built their policy platforms on a deep suspicion of trade, including vows to abandon the Trans Pacific Partnership and renegotiate or scrap NAFTA. This is largely the fallout of the 2008 Great Recession, which caused tremendous economic dislocation and anger across many segments of America. And these folks have made their displeasure well known through Trump’s victory. This economic unease is reflected in a rising tide of nationalism elsewhere in the world. Trump’s hostile position on immigration is similarly isolationist and in synch with developments in other countries, including Brexit and the growing anti-immigrant sentiment across Europe. Again, this marks a significant shift in global values.

Throughout the post-war period, the world has relied on the U.S. to take a dominant leadership position in promoting trade, immigration and democratic freedoms worldwide and fighting against isolationist tendencies. Trump represents a capitulation of this role. America’s abandonment of global leadership threatens the entire foundation of western prosperity, Canada included.

Beyond trade and immigration, the 2016 U.S. election has also undermined the institutional backbone of democracy. We will obviously never know if Trump actually would have refused to accept a Clinton victory, but his suggestion that the electoral process was ‘rigged’ against him opens the door to future dissent and disruption that could prove very damaging. The same goes for the depressing decline in electoral behaviour. Trump’s insult-laden performances during the televised debates − calling Clinton a “nasty woman” who should be “in jail” − set new lows for such events. It certainly marks a massive decline in civility when compared to the 2012 televised debates between President Barack Obama and Republican candidate Mitt Romney. Four years ago, the two candidates sat at a desk and politely disagreed with each other on the finer points of health care, foreign policy and the optimal number of ships in the U.S. navy. They may not have been best friends, but they managed to have a coherent and detailed debate that illuminated significant differences in their platforms for the benefit of voters.

What explains the rapid decay in good manners? Trump’s predilection to insult and threaten whoever challenges him certainly has a lot to do with it. Yet once again the outcome cannot be laid solely on his outsized personality. Trump’s behaviour is also indicative of broader societal trends, especially the tendency of social media to push all conversations towards extremism by exaggerating existing beliefs and prejudices. The increasing polarization of the U.S. vote along racial, educational and geographic lines further reinforces this effect. And the echo chamber effect has eroded the value of facts in political debate.

Canadians who’ve watched this election unfold in front of them may seek solace in the fact our elections have not become so thoroughly debased. Trade and immigration are thankfully still considered virtues in this country. And we offer greater respect to our democratic institutions. But all this is just whistling past the graveyard. Given the U.S.’s outsized role in world affairs and the global economy, the Trump effect is likely to touch us all.