Allen Abel: Even as the president tweets insults, Santa Claus is giving him the benefit of the doubt. So are a surprising number of voters. 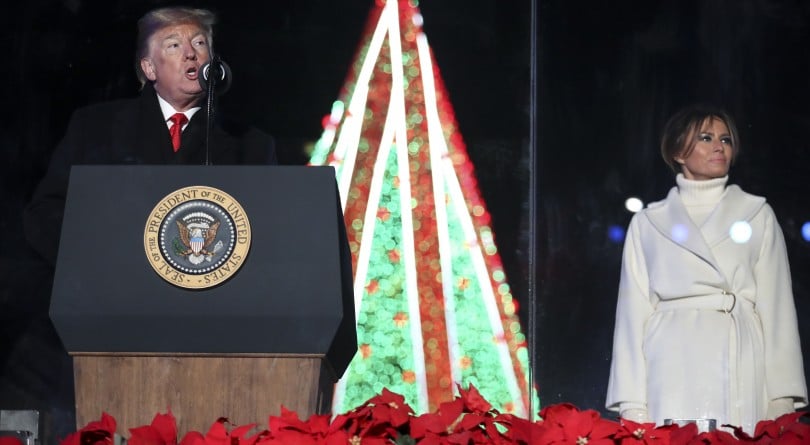 Ominous. On Wednesday evening, just as the sun was setting, a murmuration of hundreds of starlings, clannishly wheeling and snarling and squeaking, encamped for the night in the bare beech trees and the ancient oaks on the North Lawn of the White House.

Outside the fence on Pennsylvania Avenue, there was an eerie quiet, where usually there are raucous crowds of demonstrators and florid Trump-cursers and an orderly people’s army of Chinese visitors. Tonight, nobody; no sounds but the birds’ hellacious caws. It is said that, in flocks such as these, the youngest, most vulnerable newcomers are exiled to the fringes for the sake of the greater mob’s protection. It is the same in Washington: the fledglings go to prison while the cock-of-the-walk in his splendid plumage struts free. So far.

Then, around the corner, sudden lights and laughter. It was getting Christmasy in the capital of a country that—despite everything—still is such a beacon of liberty and possibility that men will claw at barbed wire and a woman with babies in her arms will suffer a shaft of rebar through her thigh to get here. Even the president himself was going to join the merriment, though rage and persecution is the more common mood for him, even at Christmastime.

Santa Claus was at the western fence, helping people find their way to the lighting of the National Christmas Tree by Donald J. Trump and his inscrutable First Lady and other members of their extraordinary murmuration.

“From my sleigh, I see everybody smiling,” Santa said. (The blue-eyed, real-bearded elf was wearing a tag that said VOLUNTEER, disguising himself as a federal worker and firehouse Claus from Fairfax, Va. named Dave Wood.) “My tweets come from children who are hopeful and optimistic. I don’t see anybody trashing Santa. It’s all about the love.”

“What if Donald Trump climbed on your lap?” Santa was asked. “What would you ask him for?”

“He is a husband, a father, a citizen,” he answered. “I think he wants the same things that we all do—peace and harmony.”

You have to remember—this was Santa Claus speaking.

“From my friends and the people that I choose to share the holidays with, I’m not seeing the negative stories that are being published and the bad things that I see on TV.

“I see love,” said Santa Claus. “But I only can speak for the month of December.”

If you hadn’t won the Park Service lottery for a ticket to the lighting, you were stuck on the sidewalk on Constitution Avenue, where the engines of the idling garbage trucks that blocked the boulevard made it almost impossible to hear the military band or the B-list singers or the president himself as he humbly bestowed his hollow-sounding blessings upon the wind-chilled, rather paltry throng.

RELATED: Why Trump’s handling of the Jamal Khashoggi murder is so dangerous

(Trump, the great military-school and boudoir athlete, rode his limo the whole few hundred metres from the South Portico to the Ellipse. Not for him Barack Obama’s penchant for breaking free from the castle grounds to mingle with food-truck vendors and tourists, exultant, hollering “The bear is loose!” Even the taciturn Calvin Coolidge was able to walk under his own power from the White House to light the tree in 1928. But not for Fred and Mary Trump’s son the chance encounter with the common man.)

Two women who work at the Veterans Administration hospital in Murfreesboro, Tenn. were squinting at the distant celebration from down on Constitution, not far from the spot where, in 2011, an unemployed 21-year-old man from Idaho put seven bullets through the windows of the White House with a semi-automatic Romanian rifle.  No one was injured. The shooter claimed that he was Jesus Christ, which is not the same thing as being Santa Claus. Of course, in Donald Trump’s America, nobody is unemployed.

The women said that they weren’t especially political, which puts them in the majority here, though rarely do you see them through the black clouds of the starlings in the sky. They had voted for the losing Democrat in the state’s recent senatorial election only “as the lesser of two evils,” they shrugged. They were in Washington for training, they explained, and just happened to catch the presidential lighting of the sacred tree on the supposedly agnostic federal greensward. The National Menorah stood nearby, unlit, awaiting sunset Sunday.

“When you look at the president, what do you see?” the women were asked by a reporter whose late uncle was a psychiatrist at that same VA hospital in Murfreesboro, 70 years ago, treating the traumatized yet lucky men who made it home from the Second World War. Small world.

“I am afraid of the word ‘nationalism,’” replied one of them. “I lived in Germany for two and a half years, and I know what ‘nationalism’ means. It’s not Trump. It’s his supporters—who knows what they are willing to do for him?”

RELATED: Toxic politics, spite and lies divide America ahead of the mid-terms

From this vantage point, it was just possible to see the tree and to hear the voice of the president as—using his extraordinary intelligence—he counted backward all the way from five to zero to cue Melania to flip the switch and illuminate the towering spruce.

It already had been a busy day and week for the Pennsylvania Avenue Trumps. The First Lady had been ridiculed by the usual flock of squealing haters for decorating the White House corridors with devil-red cones of cranberries instead of traditional pines. (“You are in Melania Trump’s nightmare forest. Keep to the path,” sneered the Washington Post.)

Yet here was Melania at a military base on Wednesday morning, taking questions from schoolchildren about social-media addiction and drugs and her teen son Barron and telling them—just as a real human mother would—”He’s that age, that sometimes you feel the children they don’t listen. But they listen. They remember everything you tell them because I could hear it from his friends and people that I meet when he talks to them. He is very aware. I hope he follows what I teach him … I teach him to be responsible and treat people with respect and kindness.”

And at the same time, here was her husband hate-tweeting before sunrise, the blackbirds still sleeping in the trees outside his window, about the “disgusting Fake News” and the “angry gang of Dems” and the “illegal Joseph McCarthy-style Witch Hunt” and retweeting some fanatic’s caw—above images of the Obamas and Clintons and others of his innumerable enemies behind bars, encaged—“WHEN DO THE TRIALS FOR TREASON BEGIN?”

While the disgusting Fake News is doing everything within their power not to report it that way, at least 3 major players are intimating that the Angry Mueller Gang of Dems is viciously telling witnesses to lie about facts & they will get relief. This is our Joseph McCarthy Era!

And then, on stage, the same man, saying

“Behold, I bring you good tidings, great joy, which shall be to all people.  For unto you is a born this day in the city of David a Saviour, which is Christ the Lord. There in Bethlehem, Mary and Joseph held in their hands the son of God; the light of the world; and, through Him, the promise of eternal salvation.”

While this benediction poured forth, a woman named Suzzanne Monk was sitting on a bench on 17th Street, wearing a Santa hat stitched with the tired MAKE AMERICA GREAT AGAIN war cry. It was getting Christmasy in Donald Trump’s capital, with 48 per cent of Americans approving of his performance as president and 48 per cent disapproving and the other four per cent hiding underground until this is over.

Ms. Monk, as it turned out, was a stage comic and entrepreneur from Chicago who was marketing hand-painted Trump nutcrackers at only US$99 each and who already had sold 107 of them to acolytes with filberts to unshell. Yet she was not calling for anybody to go to jail, not even her mother-in-law, whom she defamed as a “Hillary voter and CNN watcher.”

“Now, more than ever, we need dialogue,” said Suzzanne Monk. “Yes, we are a divided nation, but that is changing. We are starting to talk to each other.”

Like millions of her fellow Americans, she had seen the video of the woman from Guatemala who tried to carry her two toddlers up and over the border wall at Tijuana, only to fall and impale herself, not fatally, on an iron bar.

“If people are risking their lives to come here,” the woman mused in her Christmas hat, “how bad could it be?”