Bernie Sanders vs. Joe Biden: Standing up or sitting down?

U.S. Politics Insider for March 9: Bernie and Biden fight about how to take the stage, Sanders has an awkward town hall and Biden racks up more big-name endorsements 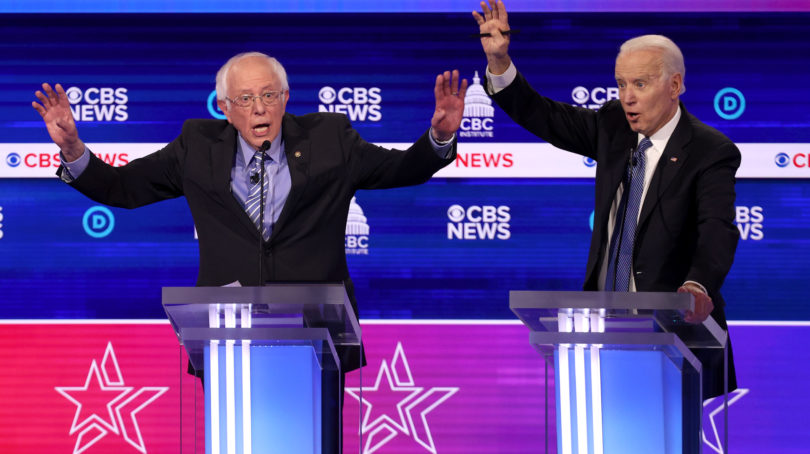 Bernie vs. Joe: standing or sitting? The Democratic primary is now a race between Joe Biden and Bernie Sanders, and one of the first big one-on-one arguments between their campaigns is about whether to stand up or sit down. The next candidate debate will take place in Arizona on March 15, and Team Sanders accused Biden of wanting to depart from the usual practice of standing at a lectern to make it a sit-down debate instead. Sanders’ senior adviser said he wasn’t accusing Biden of being too frail to stand up, but asked, “Why does Joe Biden not want to stand toe-to-toe with Sen. Sanders?” Biden’s deputy campaign manager countered, saying: “It is odd to see a campaign that says it is based on revolution arguing for the status quo because ‘this is how every other debate has been done.’ ”

Bernie vs. Joe on Social Security: On a more substantive note, now that Biden is his only competition, Sanders has begun testing out lines of attack against the former vice-president. One issue Sanders is highlighting in his ads and speeches is a recording of Biden saying he wanted a freeze on federal spending, including Social Security and Medicare, two popular programs that provide benefits to people over the age of 65. A Sanders aide told Yahoo News that the goal is to create doubts about Biden among middle-aged voters, who want the programs to be there for them when they are ready to retire. Biden’s team responded with an ad saying that the candidate currently supports expanding Social Security, and ominously warning Sanders that “negative ads will only help Donald Trump.”

Sanders’s awkward town hall: On Saturday night, Sanders prepared for this Tuesday’s Michigan primary by appearing at a “racial and economic justice town hall” in the majority-black city of Flint, trying to improve his performance with older African-American voters. According to Lisa Lerer of the New York Times, “The audience ended up being overwhelmingly white.” Sanders also decided not to deliver the speech he had prepared for the event, and instead asked questions of the black panellists, including Harvard professor Cornel West, who replied to one of Sanders’ questions by blaming black voters for letting “the neoliberalist” Biden take the lead:

“[Biden] all of a sudden now is coming back to life, and the catalyst was my own black people. Oh, I’m so disappointed,” he said. “What has happened to our black leadership? Some have just sold out.”

Harris, Booker (and maybe Hillary) for Biden: Establishment Democrats are continuing to close ranks around Joe Biden—particularly former presidential candidates. New Jersey Senator Cory Booker, who suspended his campaign for the presidency in January, endorsed Biden on Monday, calling him someone who can “reignite our spirit of common purpose.” The day before, California Senator Kamala Harris, who ended her campaign late last year, released a video in which she stands in front of a brick wall and endorses the former vice president “with great enthusiasm… I believe in Joe. I really believe in him, and I have known him for a long time.” During a candidates’ debate, Harris had a notable moment when she called Biden out for his opposition to busing as a means of school desegregation. Now she says he’ll be “a leader who really does care about the people and who can therefore unify the people.” Also on Sunday, Hillary Clinton stopped short of a full endorsement but praised Biden for putting together the kind of “broad-based coalition” that helped her defeat Sanders in 2016.