Anger and disbelief are metabolizing into action in the U.S., where a new level of engagement is taking shape 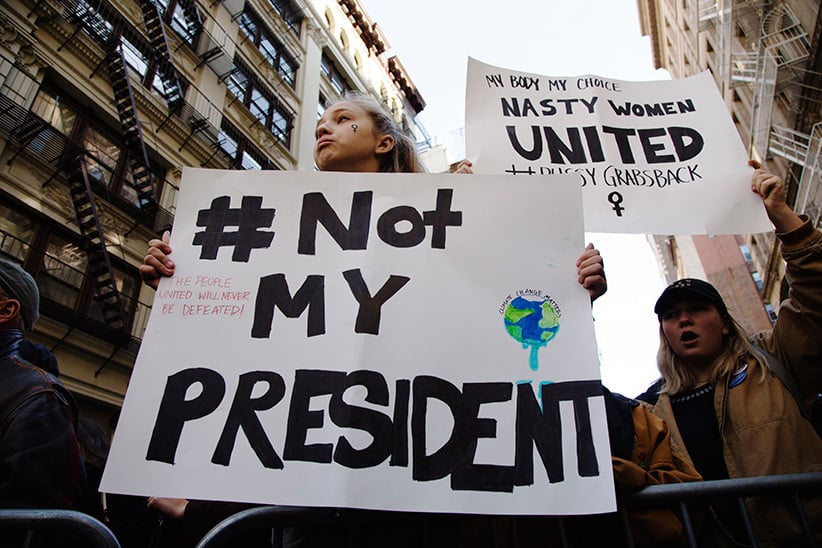 Within hours of Donald Trump’s election, Erin Bow took to Facebook to express a level of disbelief, anger and concern that exceeded the platform’s capacity to “share” and “like.” The Kitchener, Ont.-based young adult fiction author, a dual Canadian-U.S. citizen, invited people to gather at her house for a “Standing Feminist Rage Coffee Klatch.” Within hours, 10 people were in, with some 40 more wanting to engage via live-stream. Bow, who grew up in Omaha and married a Canadian with whom she has two girls, told Maclean’s her response was instinctive: “I’ve always believed in the institutions of American democracy and I’m all for peaceful transition of power, but that doesn’t mean I’m going to watch mass deportations lying down.” Expressing online outrage is inadequate, she says: “Anger is a fuel; you have to put it to good use.” The group’s first task will be determining an agenda, says Bow, who jokes that the gathering, scheduled for Nov. 24, could end up renamed “Standing Feminist Rage Wine Hour.” Similarities to the “consciousness-raising” of the ’60s and ’70s are not lost on the 44-year-old. “Our progress over a generation has been far more fragile than we’re willing to admit.”

Bow’s reflexive need to gather and mobilize played out on an unprecedented scale following Trump’s surprise victory. Hundreds of thousands took to streets across the U.S. and Canada to protest, with chants of, “Not my president!” and signs reading, “We will not be silenced!” “Love trumps hate!” “Not a mandate!” The need to engage directly, to escape social media’s cosseted echo chamber, the very bubble that inoculated many from the prospect of a Trump presidency, was undeniable.

MORE: How sexism and bigotry won Trump the presidency

As anger and disbelief metabolized into action and activism, an iconography of protest emerged: Post-It notes offering supportive messages were plastered in subway stations and on school washroom mirrors; the safety pin, adopted as a symbol in Australia in 2014 and in post-Brexit U.K. to signal alliance with vulnerable groups, popped up on lapels and social media avatars. Safety pins, denounced by some as merely a “feel good” gesture, weren’t the only gesture denoting fear of what was to come. Non-profits protecting Trump’s avowed targets—civil liberties, women’s reproductive rights, immigrants, the LGBTQ community, the environment, press freedom—saw a spike in donations, aided by sites like Jezebel’s list of “Pro-women, pro-immigrant, pro-Earth, anti-bigotry organizations that need your support.” Within 24 hours, the American Civil Liberties Union (ACLU) received a record high in online donations of some $940,000, a tally that now stands at more than $7.2 million. Trump has become a poster boy for the ACLU, which published a harsh message for the president-elect, promising its “full firepower” should he seek to undermine the Constitution. Its homepage reads: “See you in court,” next to Trump’s photo and a “donate” button. 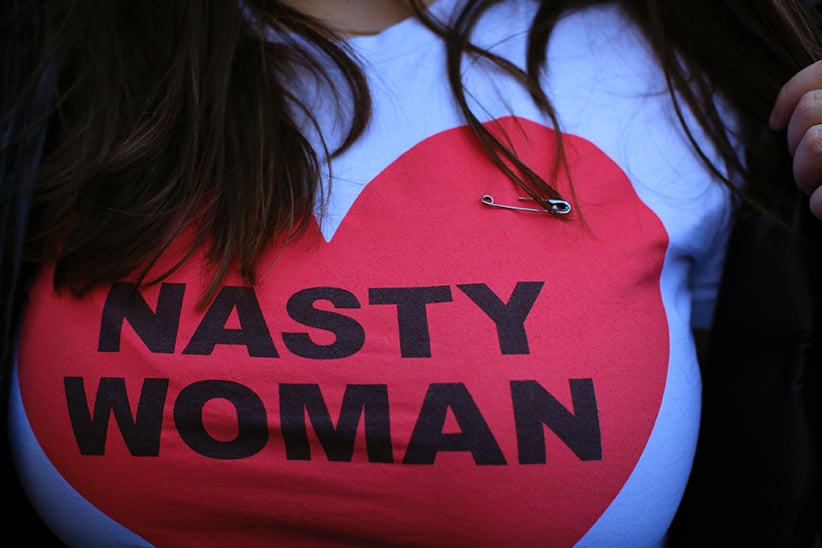 A woman wears a safety pins as a sign of solidarity against intolerance during a rally against US President-elect Donald Trump in Union Square on November 12, 2016 in New York.
Americans spilled into the streets Saturday for a new day of protests against Donald Trump, even as the president-elect appeared to back away from the fiery rhetoric that propelled him to the White House. (Kena Betancur/AFP/Getty Images)

A sense of impending unease that predated the election can now be seen in the formation of private Facebook groups, among them “Binders Full of Nasty Women” and “Pantsuit Nation,” that allow members to post without fear of harassment. Now “Pantsuit Nation,” with 3.2 million members, is mobilizing offline at events such as Women’s March on Washington, with at least 70,000 expected on Jan. 20., the day after Trump’s inauguration. Anger, that unfeminine emotion, is front and centre as women embrace Trump’s “nasty woman” put-down: “This p—y grabs back” reads one protest sign.

Social media has proven useful in tallying real-world targets for dissent: calls to dismantle the Electoral College; boycott lists of Trump-related brands and retailers who sell them. (This has proven to be a complex enterprise: Shoes.com, for instance, delisted New Balance products after a company official supported Trump’s TPP stance; immediately, white supremacists deemed its sneakers “the official shoes of white people.”)

For now, there’s vigilance against “normalizing” a Trump presidency, seen in the call to boycott People, which in October published an account by a former reporter accusing Trump of assaulting her during a 2005 interview. Post-election, its coverage turned fawning: “27 photos of Ivanka Trump and her family that are way too cute” and a “He’s hired!” Trump cover story.

Jen Gunter, a San Francisco-based ob-gyn and reproductive health activist and educator, calls for another form of vigilance now that the country has a climate-change denier in the White House: to counter the data floating freely online and seen during a campaign in which Trump accused Clinton of supporting “ninth-month abortions.” (In fact, only 0.3 per cent of abortions occur after 21 weeks and a ninth-month abortion of a healthy fetus simply does not occur.) Gunter expresses concern about the punitive effect of a Trump presidency on both women’s reproductive rights and recognition of the importance of scientific data: “I am terrified of living in a post-factual world,” Gunter says. “Subjective discussions belong in art galleries and over dinner.” She suggests people pass on one useful piece of accurate information about women’s reproductive health care every day: “Let’s drown out the bad information.” 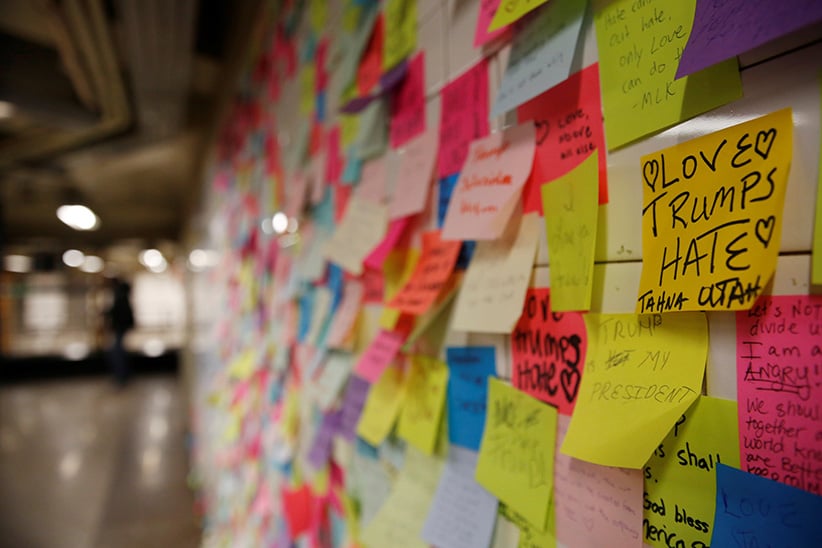 Activists argue that a new level of engagement, beyond the safety pin, is needed: “We have to be there for our neighbours, for so many groups Trump and his supporters have targeted to pledge to interrupt the hate and mean it,” says Therese Shechter, a Brooklyn-based documentary filmmaker who volunteered for the Clinton campaign. “We’re stronger together,” she adds, echoing a Clinton campaign slogan. This will mean people chipping in to make up for Trump’s threatened defunding of Planned Parenthood, says Gunter. It receives some $500 million annually from the government: “If every person who voted for Hillary Clinton [more than 62 million] donated $10 a year, the shortfall could be met.”

Kayla Santosuosso, deputy director of the Arab American Association of New York, put this maxim into practice with a Google doc that allows people to volunteer to travel with anyone who feels under threat. More than 5,600 have signed up; the initiative has spread across states. Talk of a new-found “resistance” indicates lack of familiarity with people working in the trenches for decades, says Shechter: “Activists—for LGBTQ, people of colour, disability rights—have been fighting these battles for a long time. They’ve mobilized their communities, and the rest of us need to take their lead and join them in doing this work.” Given Trump’s control of Congress, the Senate and the judiciary, citizens need to engage at other levels of government, says Gunter, who points to turnout at mid-term elections being traditionally low. “You can take control of one branch of government,” she says. “Governors control state rights. If Roe v. Wade falls, some states can enact protections.”

MORE: On Veterans Day—a day of remembrance—America gazes into uncertainty

Shechter too points to a need for greater community engagement. “We have to focus on the local level, way down the ballot,” she says, “how judges get into the system, the composition of school boards, community policing and services. There has not been the same enthusiasm to vote at these levels. Maybe next time there will be.”

Trump backlash has migrated north of the border, in marches and attention thrust on Conservative leadership candidate Kellie Leitch, who sent a letter to supporters calling the Trump victory an “exciting message that needs to be delivered in Canada as well.” A #StopKellieLeitch movement calls for people to join the Conservative Party of Canada to vote against her. 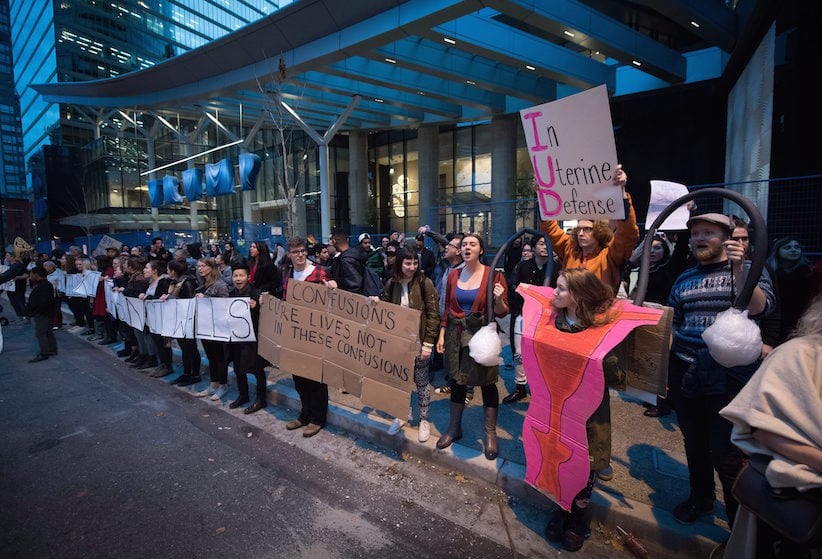 Yet smug relief that this country is a progressive nirvana is misplaced. “We have our eyes south of the border, but many can’t drink the water in Native communities,” says Bow. This week, the Legal Education and Action Fund (LEAF) filed a complaint to the Ontario Judicial Council regarding Justice Bernd E. Zabel, who reportedly entered a courtroom wearing a red Trump “Make America Great Again” hat, on grounds that it breached principles of judicial office, including the need to be “impartial and objective.” Toronto city staff had to remove racist posters addressed “Hey, WHITE PERSON” calling for the end of multiculturalism. The country has also seen a rise in reported hate crimes, including the house of an Ottawa rabbi defaced with anti-Semitic imagery.

MORE: Scott Gilmore on the Conservative leadership race, after Trump

Planned Parenthood Ottawa (not affiliated with U.S. Planned Parenthood) experienced an influx of post-election interest and support, says president Catherine Macnab: “The election stepped it up.” There’s a need, she says, in that Canadian women’s access to abortion remains limited: “Only one in six hospitals provides abortions and these follow our population belt along the border. Anybody who is remote doesn’t have access.” Women struggle to access the abortion pill, RU-486, or mifepristone, which has been available internationally for nearly 30 years but was only cleared by Health Canada in 2015. “Not a week goes by when we’re not flashed back to the ’50s or ’60s,” Macnab says, calling the Trump win a wake-up call. “I’m sure a lot of people are traumatized that we could go back to that.”

She hopes for a new engagement and education beginning at home, with the election, and response to it, an opportunity for parents to build tolerance: “I’d love parents to ask, ‘What have you heard?’ and move into issues around transgender rights, and what’s happening in their schools. There’s an opportunity to talk about women’s rights in a way that means something to children who don’t know that birth control was once illegal and women couldn’t vote.” Non-government leaders also need to step up, in the U.S. and Canada, she says.

“I’d like to call any people in any kind of leadership position to hire people who are marginalized, transgender people, people with disabilities. It’s always something somebody else has to do,” she says. “We’re saying we’re a kinder gentler place than across the border. People need to put that into practice.”

It’s a practice that requires stepping out of the echo chamber that sees opinions reaffirmed, and widening the conversation to include people with whom they don’t agree. “I’d like to develop more connections in minority communities and not surround myself with white people,” says Bow. She speaks in terms of what sociologists call “bridging capital”: “I’m white. I’m middle class, safe. But my Muslim friends in the U.S. are making plans about where they can travel without a visa and what assets they may have to leave behind. I want to see what those communities want from communities with more power. How we can be of help?” It’s a question destined to take on urgency in the months and years to come, long after the first reactive flash of the new counter-resistance has faded.