Scott Gilmore: America's contradictions and the efforts to solve them have always defined the country and its history. The impossible nation will beat on. 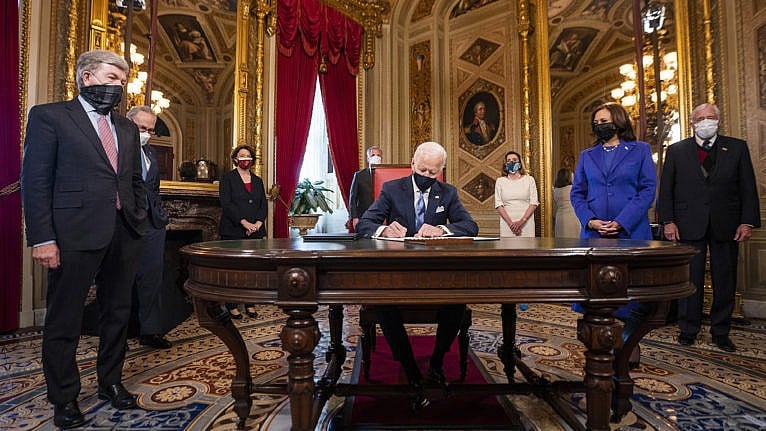 It was a presidential inauguration like no other in American history. The outgoing president did not attend. Instead, he chose to leave town early—boarding Air Force One as the gay anthem “YMCA” played over loudspeakers.

At the Capitol building, dignitaries walked through damaged doorways, still unrepaired after the unprecedented insurrection riots two weeks earlier. Unlike past inaugurations, there were no crowds to greet them. The National Mall was empty—a precaution against the COVID pandemic. And, surrounding this emptiness was an extraordinary ring of military, over 20,000 troops brought into Washington to protect the incoming president from the extremist supporters of the outgoing president.

Four years before, on a colder cloudier day, the theme of President Trump’s inaugural ceremony was “American carnage.” He lamented a broken country, plagued (as he described it) by poverty, crime, drugs and gangs. By contrast, today, in the sunshine, all the speeches, prayers and poems focused on American renewal—the urgent need to bridge the gaps between citizens.

And the need to heal does seem urgent. As President Biden stated in his address, “the forces that divide [America] are deep and they are real.” Red states and blue states have seemingly never been so far apart. An incredible 75 per cent of Republican voters still do not believe their candidate was defeated. Rural America feels increasingly disconnected from the cities and lags further and further behind in education, income and even life expectancy. And, culturally, the Midwest and the south are almost different nations compared to the east and west coasts.

The defining question that this new administration will spend the next four years trying to answer is: Can these divisions be healed? For his part, on his inaugural day the new president promised he would bring America back. Biden pledged to be a president for all Americans and has laid out his plans to “build back better.”

The odds seem long. Americans seem to increasingly live in separate worlds, governed by different values, defined by different economic realities, informed by different media. All of President Biden’s efforts to build bridges will be discounted by faithless news anchors, sabotaged by opposing politicians, thwarted by the forces of digital progress that seem to be beyond anyone’s control, and haunted by the nation’s own bloody history.

But, these have always been the odds.

The last day of the Trump presidency and the first day of the Biden presidency will almost certainly be defined by the unexpectedly powerful words of the young poet Amanda Gorman. Her poem was both a lament and a song. It was a condemnation and a blessing for America: “A nation that isn’t broken, but simply unfinished.”

This may be one of the most well-distilled descriptions of one of the most contradictory and chaotic nations in human history—a nation founded by slaveowners on the concept of freedom; a nation that worships individual liberty, but jails more of its own citizens than any other country on the planet; the wealthiest of all nations, with homeless filling its cities. America is and always has been a deeply flawed work in progress, with potential for as yet unimagined greatness and as yet unseen justice. And it has been those contradictions and the efforts to solve them, to create a more perfect union, that has defined the country and its history.

President Abraham Lincoln was wrong. He warned that “a house divided against itself cannot stand.” And yet, over 150 years later, it does. Somehow. While some people are pushing, others are always pulling. There are always some Americans on the wrong side of history and some on the right. The country swerves this way and that, as its people fight over the helm, careening destructively onward, but continually onward nonetheless.

Today, America after Trump is not as powerful nor as well respected as it once was. Its institutions are more ragged, and its people less unified. And tomorrow Biden may or may not be able to fix much or any of it. Nonetheless, I am certain that four years from now, and four years after that, America as a house divided will still stand—unfinished, imperfect, constantly being torn apart and neglected and rebuilt and renewed. The impossible nation will beat on, a boat against the current, borne back ceaselessly into its past.