Biden Inauguration: Five takeaways from a day of 'hope and renewal'

The president has set a daunting goal of healing the country, but there were countless signs of hope and unity—not least all those jaunty masks 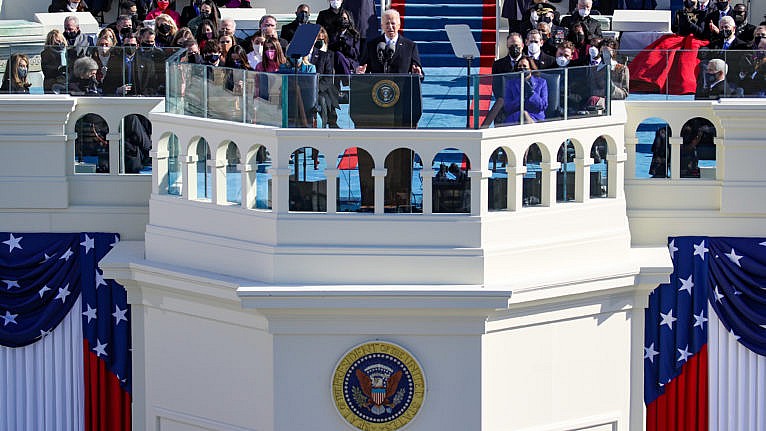 The tasks ahead of President Joe Biden require him to engage in so much healing: of those literally sick or at-risk from coronavirus; of the ailing economy; of the scars of racial injustice and white nationalism. “A cry for survival comes from the planet itself,” added the environmentally minded president. But in particular, Biden’s inaugural address stressed the need for unity as his most vital responsibility—a route to fixing all the other problems.

It’s a message infinitely more humble than his predecessor’s “I alone can fix it.” It cuts against the desires of much of the Democratic base, which wishes to treat the other side with as much contempt and indifference as the Republicans dished out—and a show of magnanimity has become a good deal less imperative now that Biden’s party holds both the House and (more narrowly) the Senate.

But the cross-partisan spirit has animated Joe Biden throughout his four decades as a senator and vice-president. Though he reliably backed many Democratic causes over the years, he also voted for Republican tax cuts and overseas adventures, while counting conservatives like Mitch McConnell and John McCain as folks with whom he could collaborate across the aisle.

In Wednesday’s address, he twice referred to the Civil War, and how the country prevailed through that existential test. To ensure his nation passes this trial, he pledges a renewed culture of kindness and collaboration that four ugly years had corroded:

We must end this uncivil war that pits red against blue, rural versus urban, conservative versus liberal. We can do this if we open our souls instead of hardening our hearts. If we show a little tolerance and humility, and if we’re willing to stand in the other person’s shoes. As my mom would say: just for a moment, stand in their shoes.

Because here’s the thing about life. There’s no accounting for what fate will deal you. Some days, you need a hand. There are other days when we’re called to lend a hand. That’s how it has to be.

Biden inherits a Washington that prefers tracking wins and losses, that has stopped looking for compromise. To truly accomplish what he’s set out for himself, he will likely have to sacrifice—or at least slow-walk —parts of  his own agenda. Unity will require him to instil patience on both sides of the partisan divide. Can he?

Well, he’s waited 33 years since his first presidential run to get to this inauguration. Without question, Joe Biden has a lesson or two to offer when it comes to patience.

The firsts are foremost

The problems that are now the Biden administration’s to solve may seem overwhelming, so it’s only fair to let Biden and Harris bask in the symbolism and meaning of their Day 1 before they tackle all the work. Harris made history in a host of ways, starting with the fact no “she” has been sworn in through more than two centuries of U.S. inaugurations. The intonation of poet Amanda Gorman as she greeted Madam Vice President said it better than any of the preceding speeches. Harris is the first Asian-American and Black person to serve in her role. She took her oath on the bible owned by Justice Thurgood Marshall, the country’s first Black Supreme Court justice. Former president Barack Obama was so caught up in the moment he was snapping phone pictures as Harris entered the stage.

For the benefit of a new administration that embraces immigrants and diversity, Jennifer Lopez interrupted her singing to shout in Spanish: “One nation under God, indivisible, with liberty and justice for all!”

There was the sea of flags along the National Mall, representing all 56 states and territories. But it also represented the space where people could not gather due to the twin scourges of the pandemic and right-wing violent extremism. The mere fact a transition of power took place on the Capitol steps without further violence was poignant, coming two weeks after a crazed attempt there to thwart the handover.

And after four too-noisy years, Biden paused in his speech for a moment of silence. It recalled the 400,000 American dead of the coronavirus.

First steps: anti-Trump, and predictable in a very un-Trumpian way

Even as he made his appeals to unity, Biden worked swiftly with several first-day executive orders ending some of the worst acts of the outgoing president: the construction of Trump’s wall, the entry ban from Muslim-majority countries, prohibitions on federal diversity and inclusion training. Other orders aim to give “Dreamer” immigrants a path to citizenship, and to reunite the U.S. with the rest of the global community in the World Health Organization and Paris climate accords.

While these actions strike at the heart of Trumpism, they are not anathema to traditional Republican doctrine, much of which the former president clumsily disregarded or sought to revise. A notable exception is a policy that has attracted Canadian ire: the cancellation of the presidential permit for the Keystone XL pipeline. Despite last-minute howls of outrage on both sides of the border, that move, like the others mentioned above, had been telegraphed by Biden’s team for several months. And this lack of surprises—this reassuring return to consistency and predictability— is itself a notable break from the Trump agenda. 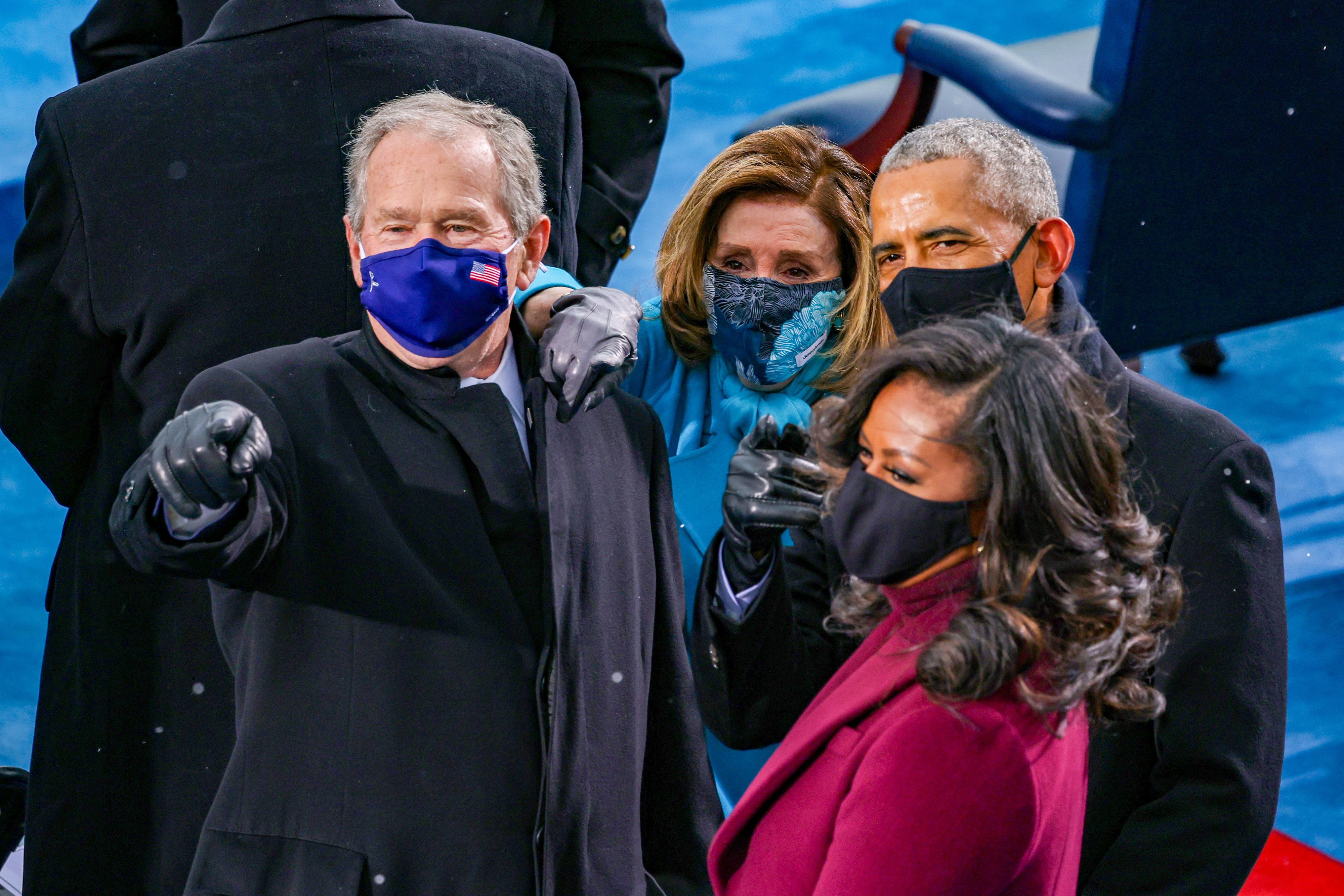 Observant chroniclers may note the striking purple coat by a young Black designer that the vice-president wore. Or the bold burgundies on Michelle Obama. Or the righteous dimple on Biden’s half-windsor necktie knot. But, let’s take what everyone hopes is history’s last opportunity to remark upon Inauguration mask fashions.

Amid the sea of standard black cloth and disposable protectors, some stood out: first lady Jill Biden’s soft-blue mask was off-hue from her ocean-blue tweed coat and dress, but cleverly complemented them. The president’s navy-coloured mask glimmered in the sun. Nancy Pelosi, known for her fondness of designer face coverings, donned the turquoise-accented number she wore to Trump’s latest impeachment vote. Daringly, Senator Amy Klobuchar went for Republican red with a big floral design, while former president George W. Bush opted for royal Democrat blue. Bill Clinton had an array of white stars on black, dude-ishly dangling below his nose.

Mike Pence had a mask with the vice-presidential seal that is no longer on his business card, while Senator Joe Manchin, a Democrat, displayed West Virginia pride with a flag mask. Bernie Sanders and Mitch McConnell eschewed style with hospital-issue disposables, while ranking fashionista Lady Gaga didn’t walk to her gold microphone in a matching mask, or any mask at all—though she donned a black cloth covering when she took her socially distanced seat.

Masks are now a key part of Washington fashion, as they should have been for 10 months. They might be for about that long again, but ideally no longer than necessary.

The Trump presidency ended at Joint Base Andrews with a final outdoor superspreader gathering of fans, the familiar soundtrack from the Upbeat ’70s and ’80s Supermarket Radio Channel, and one last meandering, triumphalist speech. This was not the grand send-off Trump may have fancied, some 1,461 days after his own inauguration. The only trappings of formal pageantry, aside from his slow march with Melania to Air Force One, were the cannon salute and a military band playing “Hail to the Chief” as his entrance music, instead of his customary walk-on, the corny country ballad “God Bless the U.S.A.”

His address, though brief for Trump, was a valedictory bit of rhetorical whiplash. He predicted “great success” for the incoming administration (which he didn’t mention by name), after spending months pre- and post-election forecasting apocalypse if he lost. Trump pre-emptively claimed credit for the anticipated economic and pandemic recovery under Biden—this after Trump himself rode the wave of late-Obama-era growth.

An aide wrote him speech text boasting along themes like greatness and “America first,” but Trump completely ditched the script, instead rhyming off some greatest hits like his establishment of Space Force and a false claim of “91 per cent approval rating” among veterans.

“We will be back in some form,” Trump said. And this is verifiable: his presence will be felt in Washington in coming days, if not in person, then in the form of an impeachment trial that will occur in the same Senate chamber that rioters acting in his name ransacked two weeks ago. “Have a good life. We will see you soon. Thank you,” the loser of the last election concluded. Then on came “YMCA” and “My Way” as he made off for one last presidential jet ride to Palm Beach, Fla.