Marie-Danielle Smith: As a sense of calm returned our minds and eyes could wander to the details—a soldier making the sign of the cross, the masked faces, a warm pair of mittens 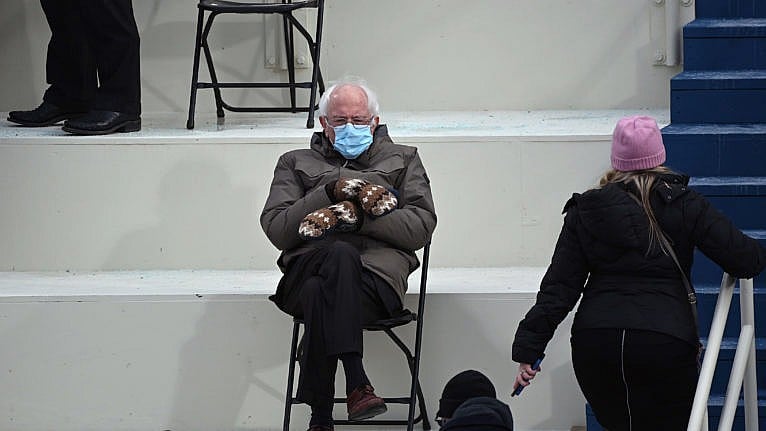 Former presidential candidate, Senator Bernie Sanders sits in the bleachers on Capitol Hill before Biden is sworn in as the 46th U.S. President on Jan. 20, 2021, in Washington, DC (Photo by BRENDAN SMIALOWSKI/AFP via Getty Images)

No crowd, here. No tourists. As if the American people were too hungover to get out of bed, the morning after a four-year binge. As if it weren’t empty on purpose.

Earlier, outgoing president Donald Trump, in a farewell speech, had for the first time in a while managed to avoid slurring the American democratic process, despite his signature hyperbole, despite veering wildly off-script. He walked away from his last presidential podium to the tune of the Village People’s “YMCA,” striding along to the lyrics: “Young man, there’s no need to feel down.”

READ: Biden’s inaugural address: ‘Together we shall write an American story of hope, not fear’

As news network split screens showed Trump’s last descent from Air Force One in Florida, and as the @POTUS Twitter account formally changed hands, the roller-coaster spectacle of his presidency felt done, felt really over, for the first time.

So as Biden prepared to be sworn in, our minds stopped spiralling with questions of the worst that could happen, what a rogue president might say or do, whether a super-spreader event was underway. Biden might stutter in his speech, sure, but insurrection was off the table. At least for today.

Now we could focus on the image of the Capitol, a stark contrast to the same building’s overrunning just two weeks before. Our minds and eyes could wander, and take in the details that made this inauguration day so strange and so mundane at the same time.

Awaiting the president-elect was a sparse audience of mostly black coats. Chairs spaced-out just so. Masks. Masks everywhere. Senator Bernie Sanders sitting by himself, at an appropriate distance from others, with his arms and his legs crossed, clad in a light-blue surgical mask and a big pair of fuzzy mitts. Nice, warm mitts.

When Biden emerged from the Capitol building, we could take a moment to appreciate the colour coordination of the First Lady-to-be. Jill Biden’s coat was sparkling ocean blue. Her gloves: blue. Her shoes: blue. Her mask: also blue.

We could take a moment to judge the colour coordination of other masks with other outfits; to fret at the precarious balancing of masks at the tips of noses (we are looking at you, former president Bill Clinton); to approve of the rare double-mask (we are looking at you, Mayor Pete). We took stock of all the purple, traditionally a colour of bipartisanship, being worn by the likes of Michelle Obama and Hillary Clinton.

We heard what Senator Amy Klobuchar was saying. “It falls on all of us, not just the two leaders we are inaugurating today, to take up the torch of our democracy not as a weapon of political arson but as an instrument for good.” We had the mental energy to also glean that she looks dynamite in mustard.

The symbolism was not lost on us when the first Latina elected to the Supreme Court administered the oath for the first Black woman and the first South Asian woman to hold the office of Vice President. Neither was the irony, when the former seemed to mispronounce the latter’s name. And the juxtaposition was striking when the new VP, Kamala Harris, flashed a giant post-oath smile before putting her mask back on, only for the camera to pan to an inscrutable Mike Pence, an outgoing veep perhaps grateful that his facial expressions could remain a mystery.

When Biden took his own oath, we saw his left hand on the family bible, a five-inch leather-bound tome, the gold lettering on its spine worn from use. He is the nation’s second Catholic president. 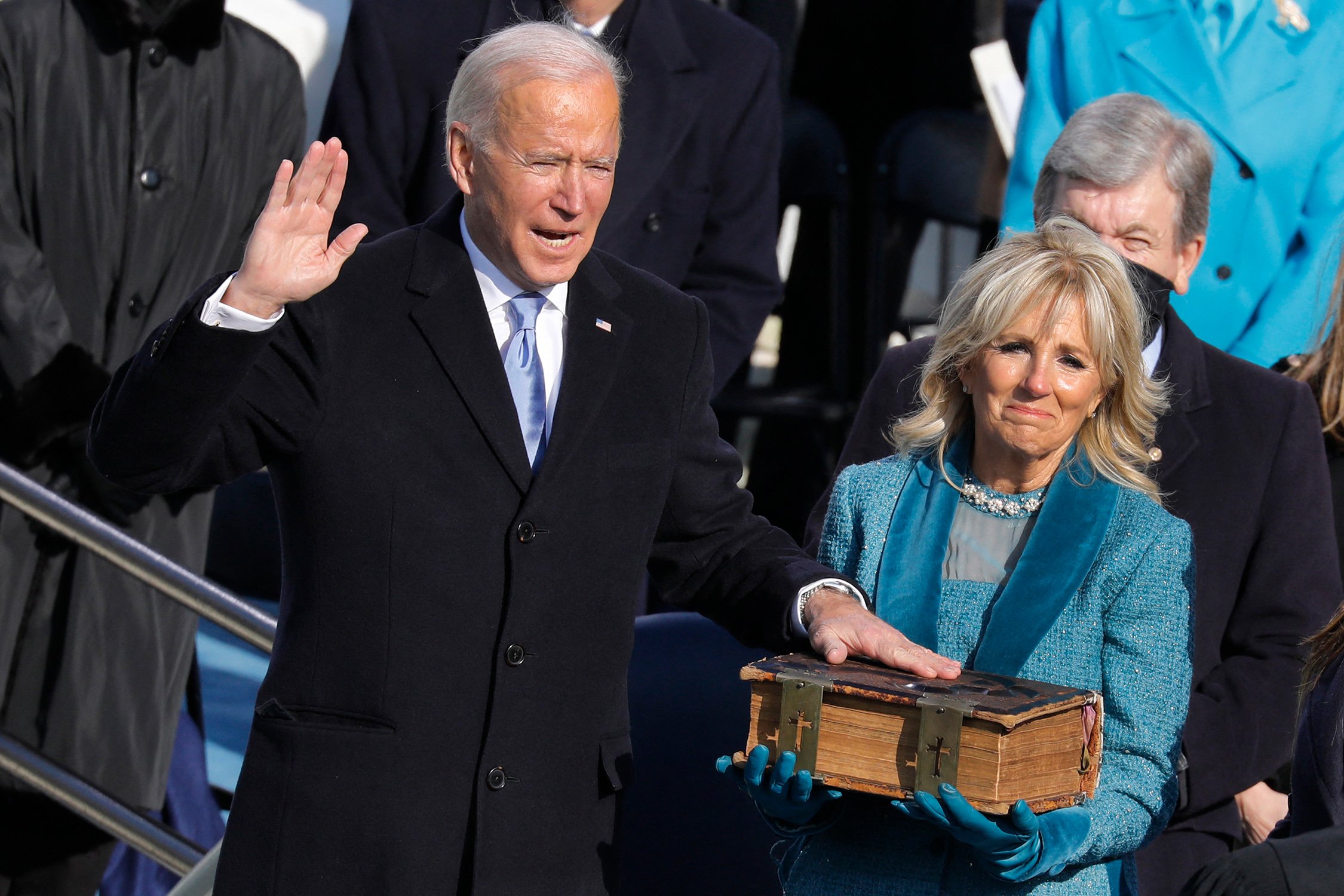 Joe Biden is sworn in as the 46th U.S. President by Supreme Court Chief Justice John Roberts as his wife Dr. Jill Biden holds the Bible on Jan. 20, 2021 in Washington, D.C. (Yuri Gripas/ABACA/CP)

When Biden delivered an optimistic speech, we heeded his words. “I know speaking of unity can sound to some like a foolish fantasy these days,” he said. “I know the forces that divide us are deep and they are real. I also know they are not new.”

But we also noticed that it was windy. There were flyaways, though no flies, at the top of the new president’s head. We noticed the sunshine at the edge of his face, almost making him squint as he uttered that “politics doesn’t have to be a raging fire destroying everything in its path.” We noticed the plexiglass shields above the Capitol balcony railings.

As cameras cut to esteemed guests, there was opportunity to discern the tiny American flag on the mask of George W. Bush. To spot the bowed heads of military officers in full camo during a moment of silent prayer. To see one soldier making the sign of the cross on his chest.

After the inaugural speech it was not Garth Brooks’s rendition of Amazing Grace or his lack of mauve that caught our attention so much as his literal hat-tip to the prez, the fact he wore jeans, and the nouveaux faux-pas he committed on his way out: shaking hands. Get it together, Garth!

Before Rev. Silvester Beaman, a longtime friend of Biden’s, stepped up to deliver a benediction, we had a second to appreciate a tall gentleman in a plaid scarf who disinfected the microphone. Then to appreciate the reverend’s dark sunglasses, a reminder, perhaps, of America’s hangover. Then to behold the incandescence of poet Amanda Gorman, who proclaimed, “There is always light if we’re only brave enough to see it. If we’re only brave enough to be it.”

As a parade of military flags went by we caught a glimpse of the Space Force colours. That Starfleet-looking logo. It was almost the only evidence, amid all this splendour, at this Democratic celebration, in this heavily-secure bubble, that there had ever been a President Trump.

And on this day with impossibly good weather, its blue skies matching the cheerful message at the dawn of an administration with so many catastrophes to manage, we were left with a lasting, compelling portrait.

Though Trump was already ensconced in Florida, here was his (until recently) most loyal soldier, standing on the mostly-empty Capitol building steps opposite his successor. For a few moments, Pence, Harris and their spouses, together on those stairs, exchanged a few words. As if civility were possible. As if a peaceful transition of power were an ordinary occurrence in their United States. As if everything might be okay.