Protestors wailed, senators cried foul, security hauled spectators from the chamber. An that was before the nominee opened his mouth 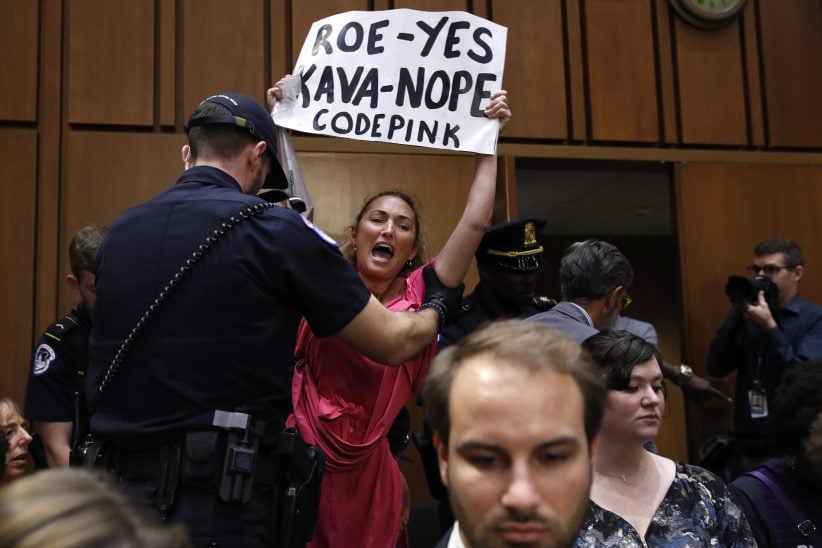 Everybody knows you don’t wear white after Labour Day, but here were 15 young women in immaculate ivory bonnets and scarlet robes over their running shoes, serried in the hallways of the United States Senate on Tuesday morning, mute daughters Ofmargaret. “Demand Justice,” they called their haunting cabal, but they demanded nothing, said nothing, stood quietly and stared into a rancorous tomorrow. Photo bait.

Outside, it was the stinkiest, sweatiest swelter of the summer. Inside, the tribes were gathering. They were lawgivers, staff members, the Rev. Al Sharpton, reporters, photographers, many, many police, and the cherished “general public”—professional leftist activists, mostly, and other anguished persons with nothing on their agenda on a Tuesday morning but to brandish their liberty to shout and get rumbled by the cops and maybe get arrested, a hard-won freedom denied to billions in other lands.

As always, there were the habituated Code Pink rousers with their ROE-YES KAVA-NOPE sign who had spent hours on the torrid pavement to score the early tickets to get thrown out of the hall, and a guy in a fuscia dirndl over his jeans and black polo muttering “Die, die die;” and a man in a JOIN UP RISE UP T-shirt guy asking one of the dozens of bulletproof, burly guards, “Are bananas and granola bars allowed?” and learning, alas, that they aren’t.

The rest of the public was at work elsewhere—ranching, building, soldiering, pushing paper, driving Ubers, coding apps—earning the money that pays the taxes that pays senators to pout and posture and raise parliamentary points of order and ban fresh fruit from their deliberations, lest the citizens hurl them at the slow-moving 85-year-olds.

RELATED: Dems get a filibuster, but Trump will get his Supreme Court nominee

As burlesque, as YouTube click-farming, as the pre-pre-precursor of a presidential campaign, as the “vapid and hollow charade” that one current justice once described it, the public grilling of a nominee to the Supreme Court ranks with any spectacle that Washington produces. Yet even before Tuesday’s cynosure—Brett Kavanaugh, career Republican stalwart, Donald Trump list-topper, baseball fan to the point of deep indebtedness, former high-ranking panjandrum in the George W. Bush White House, and already a federal judge confirmed by the Senate—could open his mouth, the proceedings dissolved into vaudevillian shambles.

We weren’t 10 seconds into the morning session before presidential timber-woman Kamala Harris of Westmount (Quebec) High School and the state of California inserted herself rudely and photogenically out of order, and the whoopers and hooters in the gallery started hooting and whooping and Cory Booker of New Jersey, who also is preening avidly for the presidency, began impugning the “decency and integrity” of the Judiciary Committee’s octogenarian Cornhusker chairman, and Amy Klobuchar of Minnesota, who likewise is testing the White House waters, jumped in, and the minority Democrats declared that the whole carnival was “a charade and a mockery” and must immediately adjourn, which thank goodness it didn’t, because dozens of other folks were perspiring outside in the hope of moving inside to be evicted.

And now one woman in the back of the room was shouting “I have a pre-existing condition! I fear for my ability to afford the privilege of living!” and another woman was hollering “I’m a cancer survivor, don’t take away my health care!” and the Democrats were moving motions and Blumenthal of Connecticut was sobbing that “this process will be tainted and stained forever,” and the senior Republican, Grassley of Nebraska, was groaning that “It takes longer to argue why you shouldn’t do anything than it takes to do it.”

RELATED: Why Canada’s Supreme Court appointments are nothing like America’s circus

Shunted into oblivion, for the morning at least, were the nominee himself and his two impeccable daughters, and his necessary Ofbrett, and his mother and his father the former perfume lobbyist who once reported a net worth of more than $10 million but whose son managed to fall tens of thousands in the credit-card hole, much of it for tickets to the Washington Nationals, who won’t even make the playoffs.

“Mob rule,” “contempt of court,” spat Cornyn, Republican of Texas, fire-eyed, uttering that the Democrats “can’t do their job when they’ve already made up their mind before the hearing.”

This was undeniable: Harris had tweeted days earlier that “The president is an unindicted co-conspirator in federal crimes and he has nominated someone to the Supreme Court who believes a sitting president should never be indicted,” and Mr. Booker had stated on the very steps of the Supreme Court across the street that “I will fight his nomination every step of the way,” and the fact was that, for all their grumbling about unreleased documents regarding Judge Kavanaugh’s time in the Bush II White House, the Republican side could declassify a trillion pages in triplicate and the Democrats still would vote Nay to seating the man.

“It gets pretty boring to hear the same thing all the time,” sighed Chuck Grassley as a few more screamers from the bleachers were manhandled out—“Fascist dictator!” one wailed—but it wasn’t clear if he was referring to the protestors or the Dems.

“He’s hurting me! He’s hurting me!” another woman cried while being bundled out of the room, potentially giving her a soon-to-be-pre-existing condition too.

“At some point are we gonna get to hear from the nominee?” wondered the jocular Kennedy of Louisiana, but the answer was no, not yet.

Kamala Harris, then, again for the cameras, so anguished about the unreleased documents, spilling sound bites, her voice breaking—even though she already had announced in public that Judge Kavanaugh “represents a direct and fundamental threat.”

And there was Hatch of Utah calling Brett Kavanaugh “a smart sensitive, normal person”—even though, the old Republican insisted on mentioning, “he puts ketchup on spaghetti.” This inanity led everyone to recall the words of the liberal Justice Elena Kagan that Supreme Court nominees of both parties have, in recent years, “presented to the public a vapid and hollow charade, in which repetition of platitudes has replaced discussion of viewpoints and personal anecdotes have supplanted legal analysis. Such hearings serve little educative function, except perhaps to reinforce lessons of cynicism that citizens often glean from government.”

It was Elena Kagan, of course, who hired Brett Kavanaugh to teach at Harvard Law School.

“We need a judge who’s in the real world, who’s independent of political ideology,” urged Amy Klobuchar, but this sophomoric wishfulness directly contradicted her own senior member, Feinstein of California, who burst the wrinkled balloon that American judges in the 21st century are anything but dependable partisan instruments.

A Justice Kavanaugh, Feinstein said, “would likely be the deciding vote on fundamental issues.” A decade from now, of course, a President Harris or a President Booker or a President Klobuchar may be doing exactly the same.

“A lot of sound and fury, signifying nothing,” quoted Cruz of Texas.

Crowed the chairman, Grassley, “Our political system is the envy of the world.”