Brian Mulroney: Anyone expressing fear and anger over NAFTA is 'uninformed'

Ahead of Trump's speech to Congress, Mulroney struck a mostly optimistic tone about NAFTA in testimony to the Senate foreign relations committee, writes Allen Abel 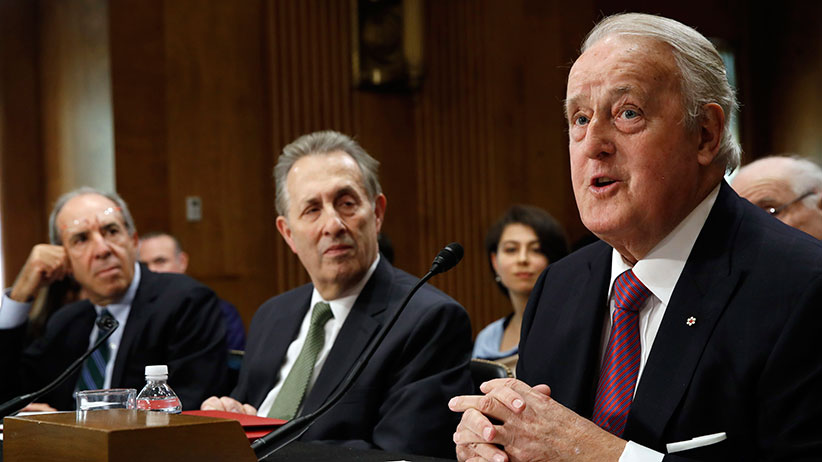 Two great statesmen with dreadful approval ratings and Yugoslav wives were headed to Capitol Hill Tuesday, one to defend continental free trade against “fear and anger” from Guess Who and his Fox-fuelled base of xenophobes, and the other to brag about his economic achievements on a day when the Dow Jones Industrial Average fell 363 points.

First came Brian Mulroney, the former prime minister of Canada and architect of the Goods and Services Tax and the Canada-U.S. and North American Free Trade Agreements late in the 20th century. Called to testify before the Senate Committee on Foreign Relations—only eight of 21 members showed up to hear him—Mulroney expressed optimism that a fairer and more effective NAFTA will emerge from Canada’s tendentious current negotiations with the Trump Administration and its fickle, fulminating commander.

Mulroney’s support of a putative NAFTA 2.0 placed something of a public crevasse between himself and Donald Trump, his friend and erstwhile Florida neighbour, whom he serenaded with a rendition of When Irish Eyes Are Smiling last February at Trump’s seaside shack in Palm Beach.

“NAFTA is a bad joke!”  Trump had tweeted two days earlier, but that was two whole days.

“If you say ‘perfection is the way I want it,’ then I don’t think we’re gonna get there,” Mulroney told the senators, while confessing humbly that “There are no perfect governments with the possible exception of my own.”

Only one in ten Canadians agreed with that assessment at the nadir of Mulroney’s popularity in 1992, but that was long ago. The former Progressive Conservative PM, who will turn 80 next year, described the United States as “the best democratic republic that God has ever placed on the face of this earth,” and calculated that “there are not enough anti-Americans in Canada to elect a dog catcher, let alone a prime minister.”

Melania Knavs Trump has remained publicly mum since it was revealed that her dearly-beloved allegedly paid US$130,000 for the silence of the Baton Rouge horizontalist who calls herself Stormy Daniels. With the first lady declining to travel with her husband to Switzerland last week for the Davos economic conference—she chose to visit the spa at Mar-a-Lago instead, at taxpayer expense—everyone in Washington this week has been wondering about the state of their union.

(Brian Mulroney married Mila Pivnički in 1973 when he was 34 and she was 19. Their daughter Caroline is the Progressive Conservative candidate for York-Simcoe in this spring’s Ontario provincial election.)

But back to NAFTA.

“When fear and anger fuel public debate, history teaches us that protectionism can find a convenient handmaiden,” uttered Mulroney in the Senate hearing room.

“When someone expresses fear and anger, how would you characterize him?” a Maclean’s reporter asked the former PM after the session.

“Uninformed,” Brian Mulroney replied. He said that he had not seen Trump on this visit and would skip the State of the Union address as well.

Mulroney was joined at the witness stand by a retired U.S. diplomat and by Mexico’s former secretary of commerce and industry, Jaime Serra Puche, whose name card was labelled as “Jamie.” Similarly, on a bad day for both Wall Street and typography, tickets for the presidential oration were misspelled “State of the Uniom.”

The boy from Baie Comeau reminded his interrogators the 1992 prediction by presidential candidate Ross Perot, that NAFTA would produce “a giant sucking sound” luring to Mexico what Mulroney enumerated as “all the hockey players in Canada and all the dancing girls in Vegas,” had not come true.

Besides, noted James Risch, Republican of Idaho, “the egg can’t be unscrambled. This is a genie that doesn’t go back in the bottle.”

“What would happen to border security if NAFTA were disbanded?” asked Chris Coons, Democrat of Delaware, on an afternoon of unusually bipartisan agreement that Donald Trump’s ominous homily—NAFTA bad, America good—was the only visible and major impediment to a protocol that had benefited the entire continental economy since The Donald was married to (and being unfaithful to) the former Ivana Zelníčková.

“This would have an extremely deleterious impact on our relationship,” Brian Mulroney answered. “We fought together in all the wars of the past. We’re democratic countries with the same traditions. We work together on ISIS. We have an exchange of security and intelligence that’s remarkable.

“The U.S. has in Canada a devoted friend and ally and it’s been that way for two hundred years. There hasn’t been a shot across that border in anger in about two hundred and twenty years, and that was a couple of Irishmen.

“Remember, we captured Detroit. And we gave it back.”

WATCH: A brief history of a complex trade agreement