Canada braces for a Trump visit in 2018

The U.S. president is finally coming to Canada for June's G7 summit. The plan so far? Keep him far away from ordinary people. 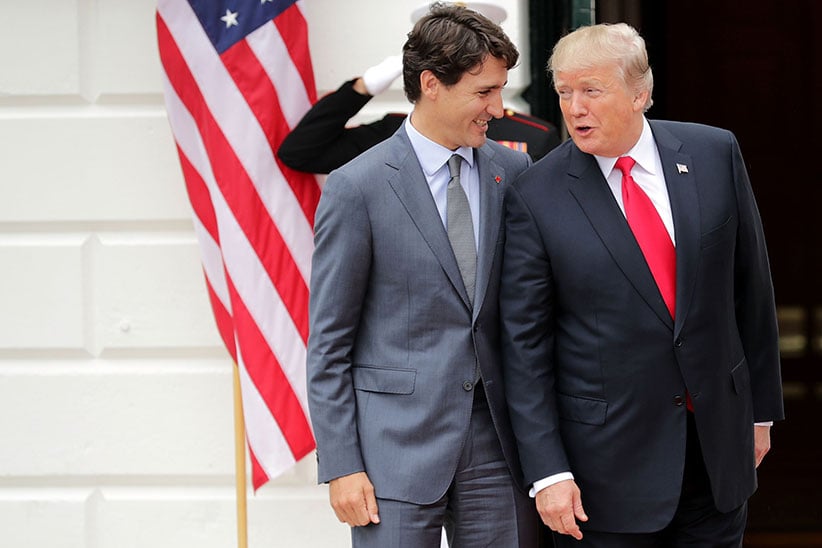 Two days after Donald Trump’s inauguration on Jan. 20, 2017, a group of anti-Trump Canadians met up in Ottawa to start an “Unwelcoming Committee.” The meeting was a ﬁrst step in organizing a protest to Trump’s inevitable visit to Canada.

“While the exact details of Trump’s visit are still unknown, Canada is typically the ﬁrst international trip of a newly inaugurated U.S. president,” the group wrote on its website. “But we’re not waiting for speciﬁcs.”

Only Trump didn’t come to Canada in 2017 as the anti-Trump group had anticipated. Instead, Trump opted to travel ﬁrst to Saudi Arabia. Then he went to Israel. Then Palestine. Then Italy, the Vatican, Poland, Germany, France, Japan, South Korea, China, Vietnam and, most recently, the Philippines.

Based on his active travel itinerary, one might be forgiven for wondering if it’s possible Trump might forgo any trip to Canada during his ﬁrst term—but that is unlikely. “Unless something really crazy happens with Trump, he’s scheduled to arrive [in June],” says Srdjan Vucetic, an associate professor at University of Ottawa’s Graduate School of Public and International Affairs. That’s when Canada hosts the G7 summit, which will take place at a remote luxury resort in La Malbaie, Que.

La Malbaie is 140 km northeast of Quebec City and 400 km from Montreal, which means there will be limited opportunity for mass protests. “This was something the Canadian government was aware of when they were choosing the summit site,” says John Kirton, director of the G8 Research Group at the University of Toronto’s Munk School of Global Affairs. “Going to La Malbaie was a decision with Trump in mind.”

“You would expect less protest because of the distance involved for protesters to get there,” says Pierre-Yves Bourduas, a former RCMP deputy commissioner. “It’s also easier to contain than an urban environment, where security details are more complex.” Nevertheless, security will be maxed out with so many world leaders at the venue. “I’ve talked to people responsible for this particular G7 summit, and they’re well-prepared,” adds Bourduas.

When Canada hosted the G8 summit in Kananaskis, Alta., in 2002, the security tab was reportedly in the $200-million range, covering, among other things, 30 missiles that were used in training exercises to test Canada’s ground-based air defence systems prior to the event. Most costly, however, were the salaries of 5,000 personnel used to secure the land and skies outside the venue. Kirton says the security invoice for next year’s event will also be in the hundreds of millions, though he doesn’t expect Ottawa to be so forthcoming about the ﬁnal costs.

While they’re tucked away in a luxury hotel for several days, Trump, Justin Trudeau and the other world leaders will have much to discuss. Trade will certainly come up, predicts Kirton. And while it’s not a G7 issue, Trudeau and Trump will have to address NAFTA if negotiations for the free-trade deal are at a standstill. Trump will likely bring up terror threats, such as North Korea. Expect Trudeau to bring up topics on which he knows he can ﬁnd common ground with Trump, such as how to work toward gender equality—something of great importance to both Trudeau and Trump’s daughter, Ivanka.

“There’s enough on the agenda to give Trump some wins and provide the appearance of consensus,” Kirton says. “But I doubt Trump will stop elsewhere in Canada on his way to [the G7] or out of there. That would inevitably take him to bigger cities where the publicity will be less favourable.” If he chose to go to Vancouver, however, he would at least have a Trump hotel to promote.

In short: don’t expect Trump to be wandering around Ottawa’s ByWard Market, meeting Canadians and buying cookies like Barack Obama did in 2009. Though should Trump insist on stepping outside the barriers and doing at least one Canadian thing for the cameras, La Malbaie has a Tim Hortons.