Canada has nothing to learn from Donald Trump's America

Canadians on the right and the left are now aping American political tactics. It's a toxic mess that offers this country nothing. 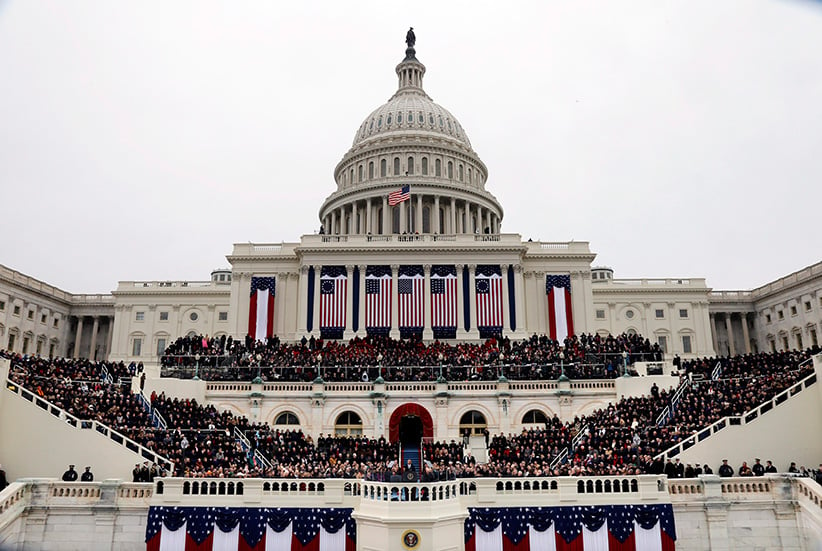 President Barack Obama speaks during the ceremonial swearing-in on the West Front of the U.S. Capitol during the 57th Presidential Inauguration in Washington, Monday, Jan. 21, 2013. (Scott Andrews/AP/CP)

If there is one thing Canadians should notice about the garish and morbidly fascinating carnival unfolding around Donald Trump’s presidential inauguration in Washington, with its parades, protests, pomp and pathos, it’s that all the rhetoric and the remedies competing for dominance in American political culture will be brought into sharp relief, and there’s nothing in any of it that’s of any use to Canada.

America is choking on its own vomit. While Bikers for Trump rednecks mingle angrily with hoodie-clad DisruptJ20 sloganeers along Pennsylvania Avenue, Canada is beginning a year of celebration and national reflection on the 150th anniversary of the British North America Act, and the prospects for Canada in the 21st century. Still, at this weird juncture in the dramatically different trajectories our two countries have taken, the last thing Canadians should do is retreat into the boring delusion that we are somehow better than Americans. We’re not. We’re just different, and we’ve been lucky. Canada is a thinly populated, uniquely decentralized federal nation state, a bilingual, multicultural, constitutional monarchy. Somehow, as liberal democracies go these days, we’re muddling through.

We remain burdened by our own vexing dysfunctions. Most are of our own making. Some we’ve inherited from the earliest days of Confederation, not least the persistent estrangement in the relationship between the Crown and Indigenous peoples. Rates of suicide, alcoholism, spousal abuse and drug addiction are no better among Canada’s Aboriginals than among African-Americans, and poverty, incarceration and school dropout rates are far worse.

But these conditions are our own, and whatever Canada’s ailments, they won’t be responsive to experimental treatment by any of the competing American elixirs and therapies that have each failed so miserably to rid the United States of its own maladies.

Even so, within the Conservative Party of Canada there are people who imagine that Trump’s example might be mimicked by inviting Kevin “Hail King Trump” O’Leary back up from Boston or New York or Los Angeles or wherever the reality-television capitalist has been living lately, to lead a Conservative charge to retake the Prime Minister’s Office. O’Leary has dug a vein so deep into lowbrow populism that he’s struck on the idea of selling Senate seats, for perhaps $200,000 each. Even in his most craven moments, Trump himself hasn’t sunk that low. The Trump-admiring Conservative candidate Kellie Leitch has also been helpfully candid in letting it be known that her xenophobic dog-whistling run for the Conservative top job is more important to her than the dire implications an unhinged American President presents for Canada’s trade-reliant economy and our national security.

Greenpeace added nothing to any Canadian conversation last week when it chartered a helicopter for yet another American celebrity ritual, this time with hippie-epoch Hollywood activist Jane Fonda. Even if the Trump administration fully abdicates from Barack Obama’s greenhouse-gas reduction commitments at the 2015 Paris climate summit, the most daunting policy challenge confronting Canada will remain a necessary long-term transition away from the country’s carbon-based energy economy. The thing to quarrel about is how to do it with the least economic disruption and the least damage to communities directly dependent upon the extraction of fossil fuels.

Flying Jane Fonda over the oil sands in a chartered helicopter so she can convene a press conference to explain to Canadians how upsetting it all was for her is a decrepit form of celebrity stage management that doesn’t even work anymore in the United States, with its divisive and deadlocked arguments between camps conventionally occupied by Democrats and “liberals” in one corner and by Republicans and “conservatives” in the other. Things have degenerated to the point that Fox News rightist Sean Hannity and fugitive counterculture-left icon Julian Assange are on the same side. The Trump-supporting white nationalist “alt-right” competes with the Kremlin apologists of the “anti-imperialist left” for the affections of Russian kleptocrat-in-chief Vladimir Putin, who is believed by 17 U.S. intelligence agencies to have employed disinformation and strategic hacking to help Trump win at the polls last November.

There is nothing for Canada to emulate in any of this. The American culture wars carry on in Congress committees, on university campuses and on cable television, sucking the oxygen out of every forum that might otherwise make some progress in unravelling the distinctly American tangles of race, class, gun violence, gender equality, poverty and a notoriously primitive public health system.

After eight years with an African-American in the White House, American voters are as pessimistic now about race relations as they were during the riots following the Rodney King verdict a quarter of a century ago. It’s been four years since the Black Lives Matter movement arose in anger over police shootings, and a Monmouth University poll last summer reported that 51 per cent of African-Americans say the movement has had no noticeable impact on American life. One in five African-Americans say it has made matters worse.

After crossing the border into Canada, Black Lives Matter activism has become best known for targeting Pride parades in Toronto, Ottawa and Vancouver with demands for the elimination of any official police participation in marches, parades and community spaces. This follows the pattern begun in Chicago and San Francisco. It’s an American thing. It is not helping.

In cities across Canada this weekend there will be copycat replications of Saturday’s Women’s March on Washington. Best of luck to the marchers, but Canada’s capital city is not Washington, where Friday’s inauguration is expected to bleed into weekend shouting matches and fancy-dress balls and exhibitions of fashionable intersectionality and louche vulgarity in equal measure. Country singer Toby Keith will serenade Trump’s crowd. The Indigo Girls will sing for the other crowd. The District of Columbia Homeland Security office reckons at least 800,000 people will pour through Washington over three days of various inauguration freak shows and jamborees.

Canadians have nothing to learn from any of this. We would all benefit from a clean break from the whole damn thing.