Canada-U.S. trade just hit an all-time high, thanks to Trump

Gilmore: The Trump era has brought a golden age for bilateral relations—never have so many Americans been so willing to defend Canada 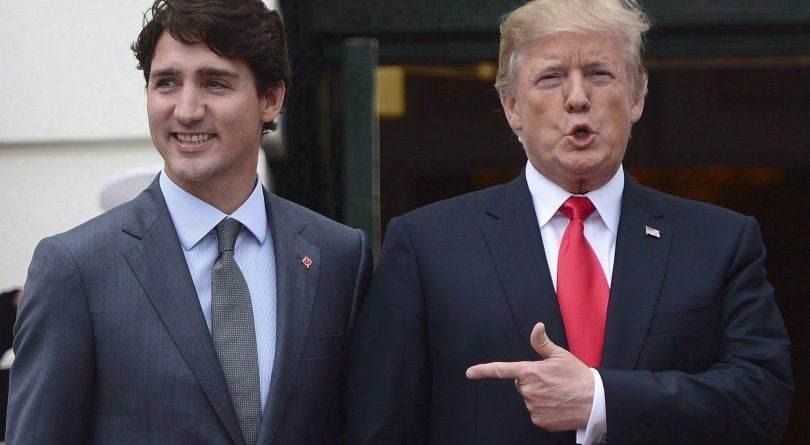 Donald Trump is a disaster for Canada. That was the widely held expectation during the 2016 campaign, and that was the conclusion when he won. The fear was that the new president, unconstrained by facts or norms, and instinctively opposed to free trade, would be a shock to the traditionally cozy Canada-U.S. relationship. The free movement of goods and people, the close diplomatic cooperation, that familial bond—all of this was threatened.

The first year of the Trump administration has done nothing to assuage those fears, and in many cases it appears to have confirmed the worst. The president launched a renegotiation of NAFTA, and has threatened, repeatedly, to just kill the deal. He has undermined various multilateral institutions that are the foundation of Canadian foreign policy, such as NATO and the United Nations. And Trump has been actively hostile to many of Ottawa’s international priorities such as climate change or the refugee crisis.

And yet, paradoxically, in many ways both substantive and symbolic, the Trump era has become a golden age for bilateral relations. Consider events of the last week. Almost out of the blue, the president announced a tariff on all aluminum and steel imports, with no exceptions. Within minutes, before government officials in Ottawa had even digested the news, American airwaves were filled with warnings that this would disproportionally damage trade with Canada. What was remarkable was that these voices were American—news anchors, pundits, and even Republican politicians.

In years past, Canadian attempts to get anyone in the U.S. to pay us attention were exhausting and rarely successful. Every foreign and trade minister who has sat in the Pearson Building has puzzled over this chronic dilemma: How do we get Washington to appreciate Canada as a good neighbour, a reliable ally, and an important trading partner? We’ve seeded the lower 48 states with consulates. We’ve parked giant oil-sand equipment on the National Mall. We’ve hosted countless embassy parties flowing with Ontario wine and sticky with Quebec maple syrup. And the best we could hope for was a friendly nod of recognition in our general direction. It was neglect—benign, but neglect nonetheless.

Trump has changed all that. Suddenly, Americans governors, CEOs, and senators have never been so aware of their northern neighbour. Everyone (except the president) now knows Canada is the country’s largest customer, buying 18 per cent of all U.S. exports. As a result, never have so many Americans been willing to defend that bilateral relationship, even if it means breaking party lines as Paul Ryan did this week. And it is not just officials. A recent Gallup poll listed Canada as the country most admired by the American public, with a 94 per cent approval rating.

This did not happen on its own. As this magazine has well reported, the election of Trump terrified the Canadian foreign policy establishment and shocked them into action. The government quickly organized a full-court press, sending politicians and officials out across the country to engage with state politicians as well as decision makers in Washington. Canadian Forces generals targeted their American counterparts. CEOs joined the fray, as did opposition politicians, even former prime ministers and premiers. Thanks to this multi-partisan effort, the Canadian government has arguably never been as focused or as well-placed to manage bilateral relations as they are right now.

What doesn’t kill you only makes you stronger. The threat of a Trump presidency has forced Canada to step up its game; and 13 months in, Canada has never been more popular and more supported in the United States. Our bilateral game has never been stronger. According to the latest data from the U.S. government, cross-border trade has just enjoyed its strongest 12-month period in history with USD$1.9 billion in goods and services going back and forth across the 49th parallel every day. Ironically, this is partly because of the low Canadian dollar, which is down due to concerns about the president’s protectionist tendencies. Donald Trump may be a disaster for someone, but so far, it’s not us.*

*Of course, because Trump’s administration is the most mercurial and chaotic in American history, all circumstances could change overnight.