Chris Christie: 'It is our obligation to stop Hillary Clinton now'

Transcript: In his Republican convention speech, Chris Christie plays the role of prosecutor against Clinton 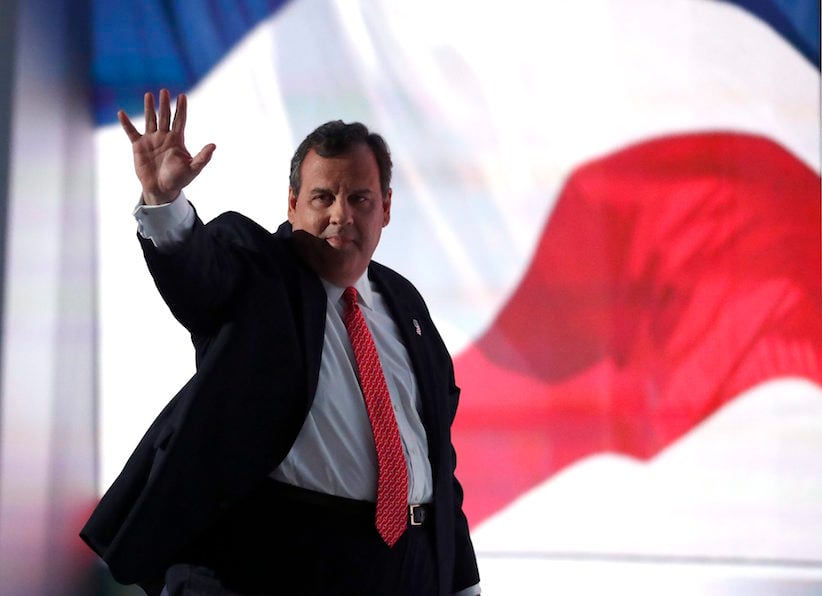 I am here tonight not only as the Governor of New Jersey, but also as Donald Trump’s friend for the last 14 years.

We are about to be led by not only a strong leader but by a caring, genuine and decent person.

I am proud to say that the voice of the people of our nation is being heard in this hall and those voices want Donald Trump to be the next President of the United States. But everybody, this election is not just about Donald Trump.

No, it is also about his Democratic opponent, Hillary Rodham Clinton.

Now, in the past few weeks, we have seen this Justice Department refuse to prosecute her.

Over the last eight years, we’ve seen this Administration refuse to hold her accountable for her dismal record as Secretary of State.

So let’s do something fun tonight.

Tonight, as a former federal prosecutor, I welcome the opportunity to hold Hillary Rodham Clinton accountable for her performance and her character.

Now. All right. All right, we’re getting there. Give me a few more minutes, we’ll get there. here’s what we’re gonna do—we’re gonna present the facts to you, you, a jury of her peers, both in this hall and in your living rooms around our nation.

You see, since the Justice Department refuses to allow you to render a verdict, I’m going to present the case now, on the facts, against Hillary Rodham Clinton.

Now, she was America’s chief diplomat. So let’s look around at the violence and danger in our world today in every region of the world that has been infected with her flawed judgment.

But I’m going to  be specific so you can render your verdict. Let’s go to North Africa, she was the chief engineer of the disastrous overthrow of Qaddafi in Libya. Libya today after Hillary Clinton’s grand strategy? Their economy’s in ruins. There’s death and violence on the streets, and ISIS is now dominating that country. So I’m going to ask you this: Hillary Clinton, as a failure for ruining Libya and creating a nest for terrorist activity by ISIS. Answer me now, is she guilty or not guilty?

In Nigeria, Hillary Clinton amazingly fought for two years to keep an Al-Qaeda affiliate off the terrorist watch list.

What happened because of this reckless action by the candidate who is the self-proclaimed champion of women around the world? These Al-Qaeda terrorists abducted hundreds of innocent young women two years ago.

These schoolgirls are still missing today.

And what was the solution from the Obama/Clinton team? A hashtag campaign! So now let’s figure it out. Let’s decide: Hillary Clinton, as an apologist for an Al-Qaeda affiliate in Nigeria resulting in the capture of innocent young women. Is she guilty or not guilty?

See? She fights for the wrong people.

She never fights for us. She doesn’t get the real threats America faces. So now let’s go to China. In China, Hillary Clinton praised the Chinese government for buying our debt to finance President Obama’s bloated stimulus plan.

She was so desperate for Chinese cash, she promised to oppose the Buy American provision in the stimulus bill in exchange for the cash to finance a huge expansion of federal government spending. So Hillary Clinton: putting big government spending financed by the Chinese ahead of good-paying jobs for middle-class Americans. Is she guilty or not guilty?

Four. Hundred. Thousand. Dead. At the hands of the man Hillary defended.

So we must ask this question: Hillary Clinton, as an awful judge of the character of a dictator and butcher in the Middle East. Is she guilty or not guilty?

Next. Next in Iran, she launched the negotiations that brought about the worst nuclear deal in history.

Let me be clear: America and the world are measurably less safe and less respected because of the Iran deal Hillary helped cut.

Period. After she launched those negotiations, she became the biggest cheerleader for this agreement in the end.

It’s a deal that will lead to a nuclear Iran, an Israel that will be less safe and secure, and a much more dangerous Middle East. Let’s ask it: Hillary Clinton, as an inept negotiator of the worst nuclear arms deal in American history. Is she guilty or not guilty?

Next.  Next. Oh, believe me, we’re not done yet. The indictment is hardly complete.

Next, let’s go to Russia. She went to the Kremlin on her very first visit and gave them that stupid symbolic reset button.

Strengthen an adversary led by a dictator who dreams of reassembling the old Soviet empire? What an extraordinarily dangerous lack of judgment.

Once again, as a flawed evaluator of dictators and failed strategist who has permitted Russia back in as a major player in the Middle East, is Hillary Clinton guilty or not guilty?

Now. Now we go to Cuba. Hillary Clinton supported concessions to the Castro brothers and got almost nothing in return for ending the embargo.

She supported a deal that didn’t even require this murderous regime to return a cop killer, JoAnne Chesimard, to face justice. See I know about this personally.

Chesimard murdered a New Jersey State Trooper in cold blood, fled to Cuba and lives there under Cuban protection to this very day.

I want to ask you: How can someone live with their own conscience when you reward a domestic terrorist with continued safety and betray the family of fallen police officer waiting for decades for justice for his murder? So let’s ask the question. Hillary Clinton as a coddler of the brutal Castro brothers and betrayer of the family of fallen state trooper Werner Foerster and his family, is she guilty or not guilty?

Now finally. Finally, here at home, in one of her first decisions as Secretary of State, she set up a private e-mail server in her basement in violation of our national security. Let’s face the facts: Hillary Clinton cared more about protecting her own secrets than she cared about protecting America’s secrets.

She said there was no marked classified information on her server. The FBI Director said that’s untrue.

She said that she did not email any classified information. The FBI Director says that’s untrue.

She said all work-related emails were sent back to the State Department. The FBI Director said that’s not true.

As to Hillary Clinton, the charge of putting herself ahead of America: guilty or not guilty?

I’ve got another question for you. I have another question: Hillary Clinton, lying to the American people about her selfish, awful judgment in making our secrets vulnerable. What’s your verdict? Guilty or not guilty?

In Libya and Nigeria: guilty.

In China and Syria.

In Iran and Russia and Cuba.

And here at home for risking America’s secrets to keep her own and lying to cover it all up.

Her focus-group-tested persona, with no genuineness to be found, is a sham meant to obscure all the facts and leave you able to vote for her. We cannot promote someone to Commander-in-Chief who has made the world a more violent and dangerous place with every bad judgment she has made.

We cannot make the Chief Law Enforcement Officer of the United States someone who has risked America’s secrets and lied about this to Congress and the American people about it day after day after day.

Here it is, everybody. We didn’t disqualify Hillary Clinton to be President of the United States the facts of her life and career disqualify her.

See, I can tell that everyone in this hall agrees with this.

But I want to talk to all of you at home, in your living rooms, sitting there tonight. You are the ones who will decide this election.

We have an alternative.

We have a man who is unafraid.

We have a man who wants to lead us.

We have a man who understands the frustrations and the aspirations of our fellow citizens.

We have a man who judges people based on their performance regardless of your gender, race, your ethnic or religious background.

I implore you: We do not need to settle for less in this election.

We cannot reward incompetence and deceit. We need to demand more than what Hillary Clinton offers for America.

‘Cause see, we know exactly what four years of Hillary Clinton will bring: all the failures of the Obama years, but with less charm and more lies.

Tonight, it is our obligation to stop Hillary Clinton now and never let her get within 10 miles of the White House again.

It is time to come together and make sure that Donald Trump is the next president of the United States.

I am proud to be part of this team.

Now let’s go out and win this thing together. Let’s go get ’em. Good night.