Does Donald Trump even want a NAFTA deal?

With the trade negotiations called off until next week, the U.S. president's talk and tactics loom larger than ever over these talks 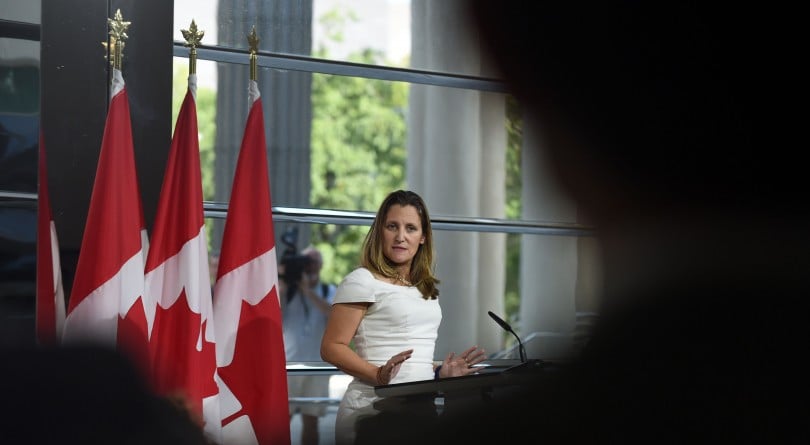 Canadian Foreign Minister Chrystia Freeland speaks at a press conference August 31, 2018 at the Embassy of Canada in Washington, DC. - A free trade deal that is good for all three nations in the North American Free Trade Agreement is within reach, but will require flexibility in negotiations, Canada's foreign minister said Friday. "We know that a win-win-win agreement is within reach," Chrystia Freeland told reporters after a week of talks in Washington to rewrite the 25-year-old NAFTA. (Photo by Eric BARADAT / AFP) (Photo credit should read ERIC BARADAT/AFP/Getty Images)

It was Foreign Minister Chrystia Freeland who, speaking in Washington earlier this week, said there’s a rhythm to the NAFTA negotiations—a rhythm that she said had on Thursday turned “very intense,” which sounded like progress.

There’s also a rhythm to Freeland’s frequent, albeit often fleeting, appearances to offer journalists a few carefully chosen sentences about what’s going on in these closed-door talks. And that rhythm is brisk. She dispatches most questions allegro, peppering her answers with phrases about “goodwill on both sides” and about her fixed objective of getting “a good deal for Canada.”

When such a reliable rhythm varies, even a little, it’s noticeable. So it was on Friday morning when Freeland was asked—after the Toronto Star broke a story about President Donald Trump boasting that any deal the U.S. reaches with Canada will be “totally on our terms”—if the Americans are negotiating “in good faith.”

Freeland paused for just a couple of seconds and then answered, not referencing Trump, but his top negotiator, U.S. Trade Representative Robert Lighthizer. “Ambassador Lighthizer and his team throughout this negotiation have been working really, really hard,” she said, before noting how each side now knows what the other thinks. She never quite got around to answering the precise question.

Good faith was certainly in doubt. The President’s remarks—made off-the-record to Bloomberg, but later leaked to the Star—put Prime Minister Justin Trudeau’s government in a tough position. Trump had portrayed Canada as desperate for a deal, himself as entirely inflexible. By late afternoon, the bargaining sessions had dissolved, with both sides agreeing to resume next Wednesday.

At a news conference held later at the Canadian embassy, Freeland took pains to emphasize the three words she wouldn’t utter earlier in the day. “I’d like to thank Ambassador Lighthizer and his team,” she said. “They have worked hard—and in good faith–with us for more than a year, including some very intense days this week.”

Freeland also stressed that the renegotiation of NAFTA, foisted on Canada and Mexico by Trump, began way back last summer. This might have been to counter Trump’s suggestions that talks with Canada only started in earnest after he announced his bilateral deal with Mexico at the start of this week. He speaks with a shrug as if Canada, by far the bigger U.S. trading partner, is an afterthought. “If we don’t make a deal on Canada,” Trump said again today, “that’s fine.”

Indeed, Trump sent a letter to Congress as U.S.-Canada talks were being suspended, asking to press ahead with a U.S.-Mexico deal, to which Canada might, you never know, be added later. But, from the moment Trump announced his bilateral understanding with Mexico, some trade law experts have said he’s overstepping the authority Congress gave him last year to try to update NAFTA.

In other words, cutting Canada out would be more than modernizing the existing treaty. As well, American media is reporting that the White House would face stiff resistance from pro-NAFTA congressional Republicans if Trump tried to shrink the trade pact to a U.S.-Mexico deal.

But the question that looms over this whole debate—with its trade-law nuances and political imponderables—is if Trump has ever really wanted to modernize NAFTA. After all, he won the presidency calling the pact, which is widely credited by economists with underpinning prosperity across the continent, “as disaster” and “the worst trade deal maybe ever signed anywhere.”

Last fall, only a few weeks into these negotiations, the façade of congeniality at the NAFTA table crumbled. Freeland vented her frustration at what she characterized as the Americans’ “winner-takes-all mindset,” while Lighthizer said he was  “surprised and disappointed by resistance to change from our negotiating partners.”

Since then, the talks have never seemed firmly on track. The most frequently cited points of deep disagreement included Mexico’s bid to safeguard its burgeoning auto sector—Trump’s most obvious target—and Canadian resistance to U.S. demands for more access to Canada’s protected dairy market and an end to NAFTA’s dispute settlement panels.

Freeland readily conceded that a breakthrough in those two-way U.S.-Mexico talks on autos seemed like a watershed in the negotiations—and on a file where Ottawa and Washington share interests. Yet instead of paving the way to a final deal, which the White House had sought by Friday, any hopes created by the Mexican concessions were dashed by Trump’s imperious remarks about getting it all his way.

The U.S. Congress must now grapple with the mix of technical issues and political calculations generated by Trump’s new tactic of pushing for a possible Mexico-only deal.  Meanwhile, Freeland’s negotiating team must regroup for next week’s resumption of bargaining.

No matter how congressional lawyers dissect the trade-law questions, though, and no matter how painstakingly the trade bureaucrats prep for the bargaining table, the biggest, wildest factor in these talks falls far outside their ambit. Major trade talks have often gone down to the wire, of course — frequently with drama in their final stages. What’s utterly different this time is Trump, a disruptive force, as he showed again this week, the experts just can’t solve for.