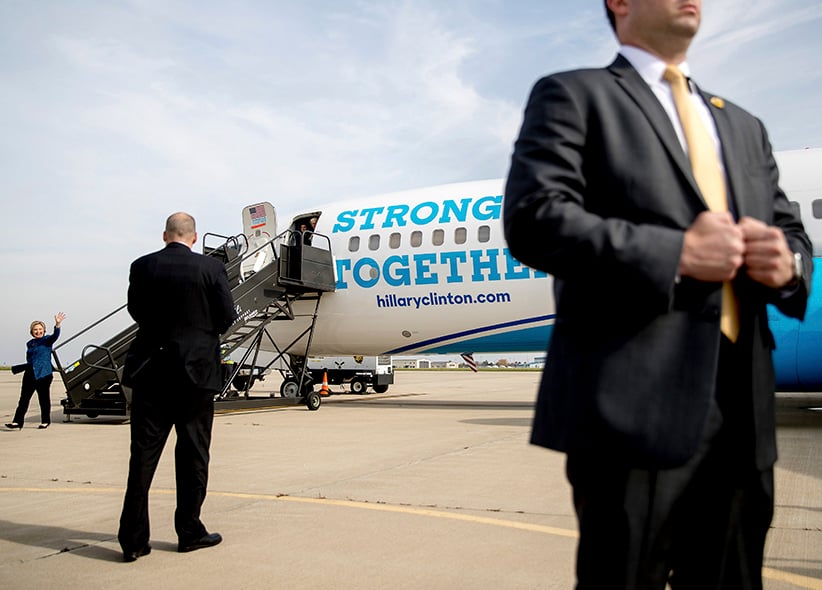 WHITE PLAINS, N.Y. — Even before FBI Director James Comey jolted the presidential campaign, Hillary Clinton and her advisers were on edge.

Never mind that preference polls had Clinton ahead of Republican Donald Trump nationally and in nearly every battleground state. Or that Democrats in Washington were starting to actively prepare for a Clinton presidency, speculating about top Cabinet nominees and next year’s White House agenda.

“The polls are going to tighten,” Clinton communications director Jennifer Palmieri warned as she talked with the campaign’s travelling press corps on Friday. After swatting away a rumour about post-election planning — this one about Vice-President Joe Biden being considered to lead the State Department — Palmieri predicted, “Next week you guys are going to come to us and say, “The polls are tightening and you were focused on the transition.'”

Palmieri had barely made it back to the front of the campaign plane when news broke that the FBI had told Congress it had found new emails that may be related to Clinton’s use of a private server while secretary of state. Speculation about a Clinton White House was quickly replaced by questions about whether a winnable race might slip from her grasp.

Clinton’s team is now plunging into the final full week of campaigning before Election Day on two parallel tracks. The campaign has launched a vigorous, co-ordinated effort to press the FBI to release more details about the inquiry, hoping more information distances Clinton from the new discoveries. They’re also wielding Comey’s controversial decision to disclose the developments in the election’s final days as a way to shake off Democratic complacency and give supporters a new reason to vote.

Trump, too, sees the FBI’s actions as an opportunity to gain much-needed traction and revive questions about Clinton’s trustworthiness. At a rally Sunday in Las Vegas, Trump said Clinton “has nobody but herself to blame for her mounting legal problems.”

While Comey’s actions have undoubtedly put more pressure on the Clinton campaign, they’ve also put the candidate in a position where she’s at ease and often at her best: back against the wall, railing against what she sees as an unfair or even a partisan attempt to take her down.

“There is something to be said about Hillary Clinton as a fighter,” said Mo Elleithee, who worked on Clinton’s 2008 presidential campaign. Noting how Clinton’s performance improved substantially after she slipped behind in the Democratic primary eight years ago, Elleithee said that when faced with a challenge, Clinton tends to “kick it into a different gear and she starts humming.”

Of course, Clinton lost that primary. And another moral victory isn’t what she’s after this time around.

With that in mind, Clinton hit the campaign trail over the weekend with gusto, blitzing across Florida, the biggest prize in the presidential race and a must-win state for Trump.

During an organizing event in Daytona Beach, she lashed out at Comey’s “unprecedented” and “deeply troubling” actions. Speaking to energized gay and lesbian supporters at a Fort Lauderdale nightclub, she vowed she wouldn’t be “knocked off course” by distractions late in the campaign.

“I’m not stopping now,” Clinton declared as the crowd roared. “We’re just getting warmed up.”

Clinton’s advisers were stunned by Comey’s actions — both by the timing of his letter to Congress and the paucity of information the FBI has made public about the new material.

The investigation appears to centre on a laptop belonging to Anthony Weiner, the disgraced former congressman and estranged husband of Clinton confidante Huma Abedin. It’s unclear whether the material on the device was from Clinton, nor is it known if the emails in question are new or duplicates of the thousands the former secretary of state and her aides have already turned over.

Democrats have robustly rallied around Clinton, including black and Hispanic lawmakers. During a Congressional Black Caucus news conference on Saturday, Rep. Gregory Meeks suggested Comey might be trying to impact the election results.

“Don’t hide in silence,” Meeks said. “Don’t be the one that’s trying to sway an election 10 days beforehand. The American people deserve and we want to know in its entirety what the emails are and what you are investigating.”

If there’s a silver lining for Clinton in the FBI’s actions, it’s that her campaign now has a way to convince Democrats who might have considered skipping voting that their nominee needs their support.

Before Comey’s letter to Congress, Clinton’s campaign had watched with mixed feelings as her standing in poll after poll improved and Trump faltered amid a string of sexual assault accusations.

“In the last week, I think the Clinton campaign was worried it was going to become too easy and that people would feel that,” Elleithee said. “Now there’s a reason for all of our supporters to believe it’s going to be hard.”