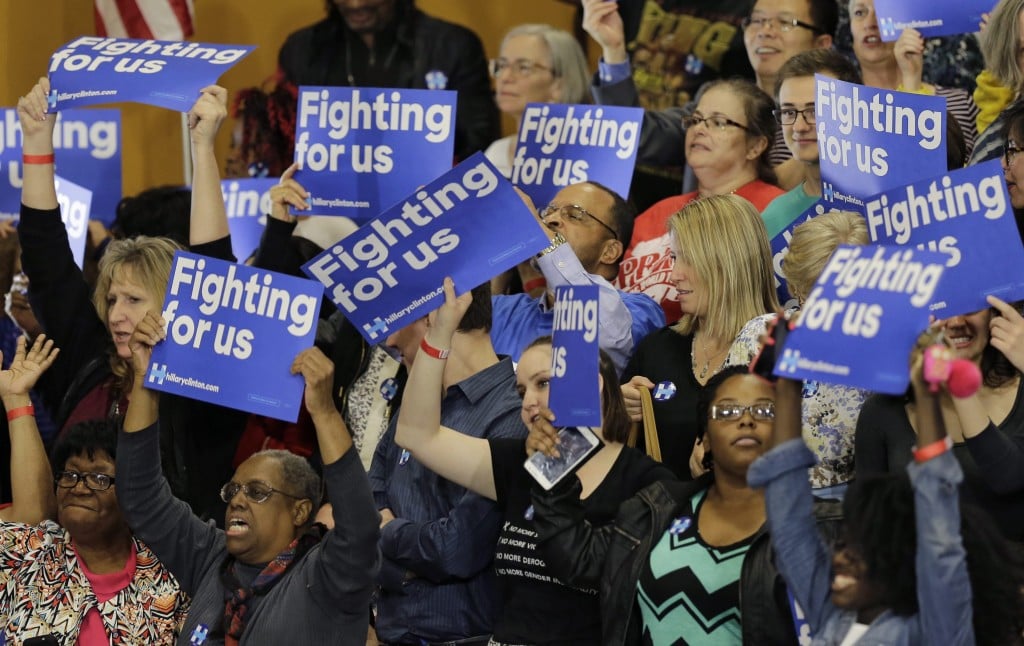 Even with Sanders’ win, Clinton and Trump moved closer to a general election face-off. Clinton breezed to an easy victory in Mississippi, propelled by overwhelming support from black voters, and she now has more than half the delegates she needs to clinch the Democratic nomination. Trump, too, padded his lead over Texas Sen. Ted Cruz, his closest rival.

The front-runners turned their sights on November as they revelled in their victories.

“We are better than what we are being offered by the Republicans,” Clinton declared.

Trump, too, turned an eye toward the Democrats and the November election, emphasizing the importance of helping Republican senators and House members get elected. Having entered Tuesday’s contests facing a barrage of criticism from rival candidates and outside groups, he reveled in overcoming the attacks.

“Every single person who has attacked me has gone down,” Trump said at one of his Florida resorts. In his typically unorthodox style, the billionaire real estate mogul was flanked by tables packed with his retail products, including steaks, bottled water and wine.

Related: Criss-crossing America to find out how Trump happened

While a handful of recent losses to Texas Sen. Ted Cruz have raised questions about Trump’s durability, Tuesday’s contests marked another lost opportunity for rivals to slow his momentum.

Ohio Gov. John Kasich campaigned furiously in Michigan in recent days. He’s yet to win a primary but hoped a good showing in Michigan would give him a boost heading into next week’s crucial contest in his home state.

Speaking to a crowd in Lansing, Kasich said a strong showing in Michigan would show the country “that it’s a new day in this presidential campaign.”

To that end, Kasich and Florida Sen. Marco Rubio were using recorded phone calls from Mitt Romney to appeal to voters as they headed to the polls. Romney, the 2012 Republican standard-bearer, has not endorsed a candidate but has vowed to help challengers to Trump, who he says would be dangerous for the country.

Republicans were also holding contests Tuesday in Hawaii and Idaho. Republican candidates were fighting for 150 delegates, while 179 Democratic delegates were at stake in the party’s two primaries. The delegates will select each party’s presidential nominee at national conventions in July.

The economy ranked high on the list of concerns for voters heading to the polls in Michigan and Mississippi. At least 8 in 10 voters in each party’s primary said they were worried about where the American economy is heading, according to early exit polls conducted for The Associated Press and television networks.

Among Democrats, 8 in 10 voters in both states said the country’s economic system benefits the wealthy, not all Americans.

Sanders has sought to tap into that concern, energizing young people and white working-class voters with his calls for breaking up Wall Street banks and making tuition free at public colleges and universities. Michigan, with big college towns and a sizeable population of working-class voters, should be a good fit for him. But Clinton has led in polling.

Related: When did America stop being great?

Tuesday’s contests are a prelude to next week’s high-stakes primaries in Florida and Ohio. Like Kasich, Rubio must win his home state in order to remain a viable contender.

Rubio has received endorsements from a steady stream of senators, governors and other high-profile Republican officials. But his backing from voters has lagged, and he entered Tuesday’s contests with just a pair of victories in the Minnesota caucuses and Saturday’s Puerto Rico primary.

If Rubio and Kasich can’t win at home, the Republican primary appears set to become a two-person race between Trump and Cruz. The Texas senator is sticking close to Trump in the delegate count and with six states in his win column, he’s arguing he’s the only candidate standing between the brash billionaire and the Republican nomination.

During a campaign stop at a North Carolina church Tuesday, Cruz took on Trump for asking rally attendees to raise their hands and pledge their allegiance to him. He said the move strikes him as “profoundly wrong” and is something “kings and queens demand” of their subjects.

“I’m not here asking any of you to pledge your support of me,” Cruz said, to thunderous applause and cheers. “I’m pledging my support of you.”

Some mainstream Republicans have cast both Trump and Cruz as unelectable in a November face-off with the Democratic nominee. But they’re quickly running out of options and are increasingly weighing long-shot ideas such as a contested convention or rallying around a yet-to-be-determined third-party candidate.

Heading into Tuesday, Trump led the Republican field with 384 delegates, followed by Cruz with 300, Rubio with 151 and Kasich with 37. Winning the GOP nomination requires 1,237 delegates.

Among Democrats, Clinton had accumulated 1,134 delegates and Sanders 502, including superdelegates, party leaders and elected officials who can vote for the candidate of the choice at the convention. Democrats need 2,383 delegates to win the nomination.