Clinton sets out most efficient path to get to 270

Clinton focuses on capturing battleground states that have decided most recent presidential elections, not on expanding the map 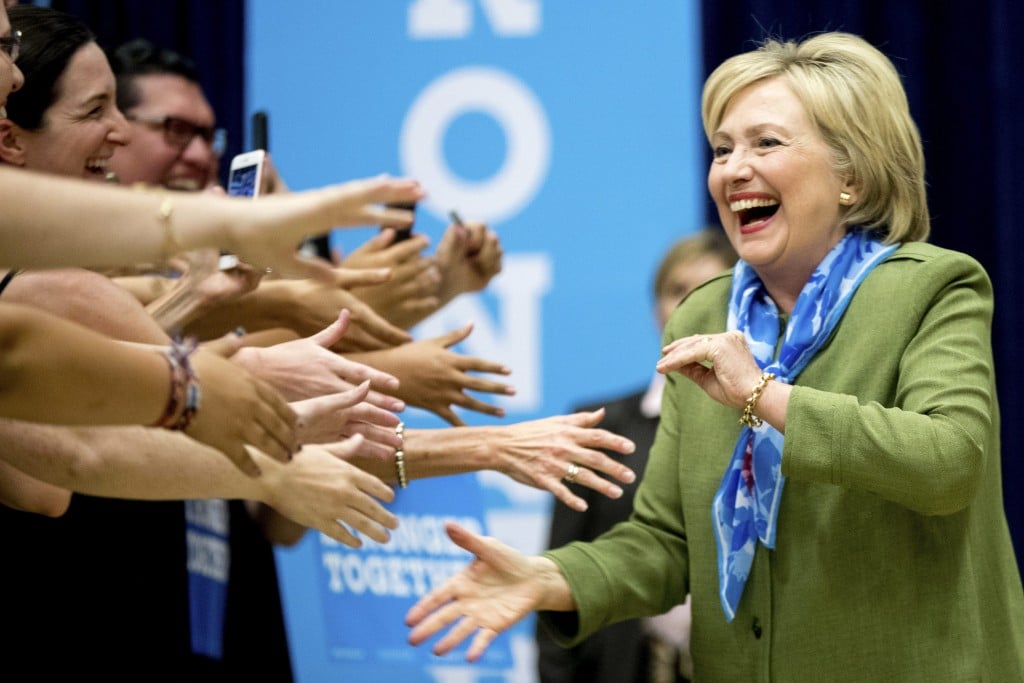 DES MOINES, Iowa – Hillary Clinton doesn’t appear all that interested in making scenic stops on her state-to-state quest to become president. The Democratic nominee is instead programming her GPS to take her on the quickest route to collect the 270 Electoral College votes she needs to win the White House.

With three months until Election Day, Clinton’s campaign is focused on capturing the battleground states that have decided the most recent presidential elections, not so much on expanding the map.

Clinton’s team doesn’t rule out an effort at Arizona, a state with a booming population of Latino voters that polls find are loath to support Trump. And Georgia, a bastion of the Deep South, echoes recent population trends in other Southeastern states where Clinton is competing aggressively.

But neither is among the 11 battleground states that Clinton’s television advertising plans and her travel schedule point to as her focus. Those states are the perennial top-tier targets Florida and Ohio, plus Colorado, Iowa, Michigan, Nevada, New Hampshire, North Carolina, Pennsylvania, Virginia and Wisconsin. President Barack Obama carried them all in 2008, and missed out on only North Carolina during his 2012 re-election campaign.

“The last two elections have given Democrats an electoral path for victory,” said Clinton campaign adviser John Anzalone. “And our strategy is to efficiently use our resources to lock down the support we need to reach 270 electoral votes.”

After a bump in support for Clinton in national polls that followed the Democratic convention and tracked Trump’s recent gaffes, the number of states where Clinton will invest her time and money may get smaller than 11.

When the Clinton campaign booked more than $23 million in new television ad time late this past week to start on Monday, it spent most of the money in just three states: Florida, Pennsylvania and Ohio. Feeling good about Colorado and Virginia, the campaign passed on giving those states a fresh injection of ad dollars, though they remain heavily staffed with organizers. Likewise, officials with the pro-Clinton group Priorities USA say they have put its advertising plans there on hold.

Meanwhile, Trump’s travel following the Republican convention suggests he’s given up on plans to force Clinton to defend traditional Democratic bastions California and New York. Beyond that, it’s not clear how he plans to chart his course to 270.

“I have states that no other Republican would do well in that I think I’m going to win,” Trump told The Washington Post this past week. “But I don’t want to name those states.”

Trump’s campaign has yet to run a single television ad and has made curious decisions about where to send its candidate. This past week, for example, Trump spent a day in Portland, Maine, chasing after the single electoral vote at stake along the state’s largely Democratic southern coast.

There have been no such distractions for Clinton since the end of her convention, aside from a quick stop in Nebraska, a visit that was probably as much about spending time on stage with billionaire investor Warren Buffett than picking up the one electoral vote in the Omaha area. (Maine and Nebraska are the two states that award electoral votes by congressional district instead of a statewide winner-take-all vote.)

This coming week, Clinton will be in Florida. So will Trump. That’s no surprise, as a win there plus victories in every state (and the District of Columbia) that have voted Democratic since 1992 would give Clinton a winning total of 271 electoral votes. Florida Republican consultant Brett Doster said simply of his state: “If we don’t win here, I just don’t see how we win.”

Despite the 2016 campaign’s unscripted form, Democrat and Republican pollsters alike said in the past week that Florida is competitive and is expected to stay that way into the fall. The largest share of single-state spending in Clinton’s most recent ad buy came in Florida, at more than $4.2 million, and that, plus an aggressive pursuit of Latino voters, may give her a narrow edge.

In Florida’s Orange County, which includes Orlando, the Democratic edge among registered voters has grown by 15 per cent since 2008. Since late last year, roughly 1,000 Puerto Rican families a month have relocated to Florida due to the U.S. territory’s fiscal crisis, many of them concentrating in and around Orlando’s heavy service-sector job scene. Bilingual teams of Clinton employees are registering first-time Puerto Rican voters at grocery stores, malls and community centres.

Republican pollster Whit Ayres said Trump’s problems in Florida go deeper than his lack of advertising and overwhelmingly unpopular standing among Latinos. He said Trump’s recent criticism of the Muslim family of a fallen U.S. soldier is not likely to sit well in a state with 22 military installations and more than 1.5 million veterans.

“The attack on the Gold Star family makes it unlikely for him to expand in Florida beyond where he is right now,” said Ayres, an adviser to Republican Sen. Marco Rubio of Florida.

While Trump may not have a path without Florida, Clinton can lose the state and still find another way through the battlegrounds to reach 270. That’s no doubt why from June 8 through Monday, Clinton and Democratic groups supporting her will have outspent Republican groups by 15 to 1 in those states, according to data from Kantar Media’s CMAG political advertising tracker.

The Clinton campaign and deep-pocketed Democratic groups such as Priorities USA have poured a combined $66 million into television and radio advertising in those 11 states. Trump’s campaign hasn’t spent a dollar on television advertising, while Republican groups have only spent about $4.3 million.

“But this is a dynamic race and we will continue to look at all pathways as this race develops,” he said.