Clinton to girls: 'Yes, you can be president' 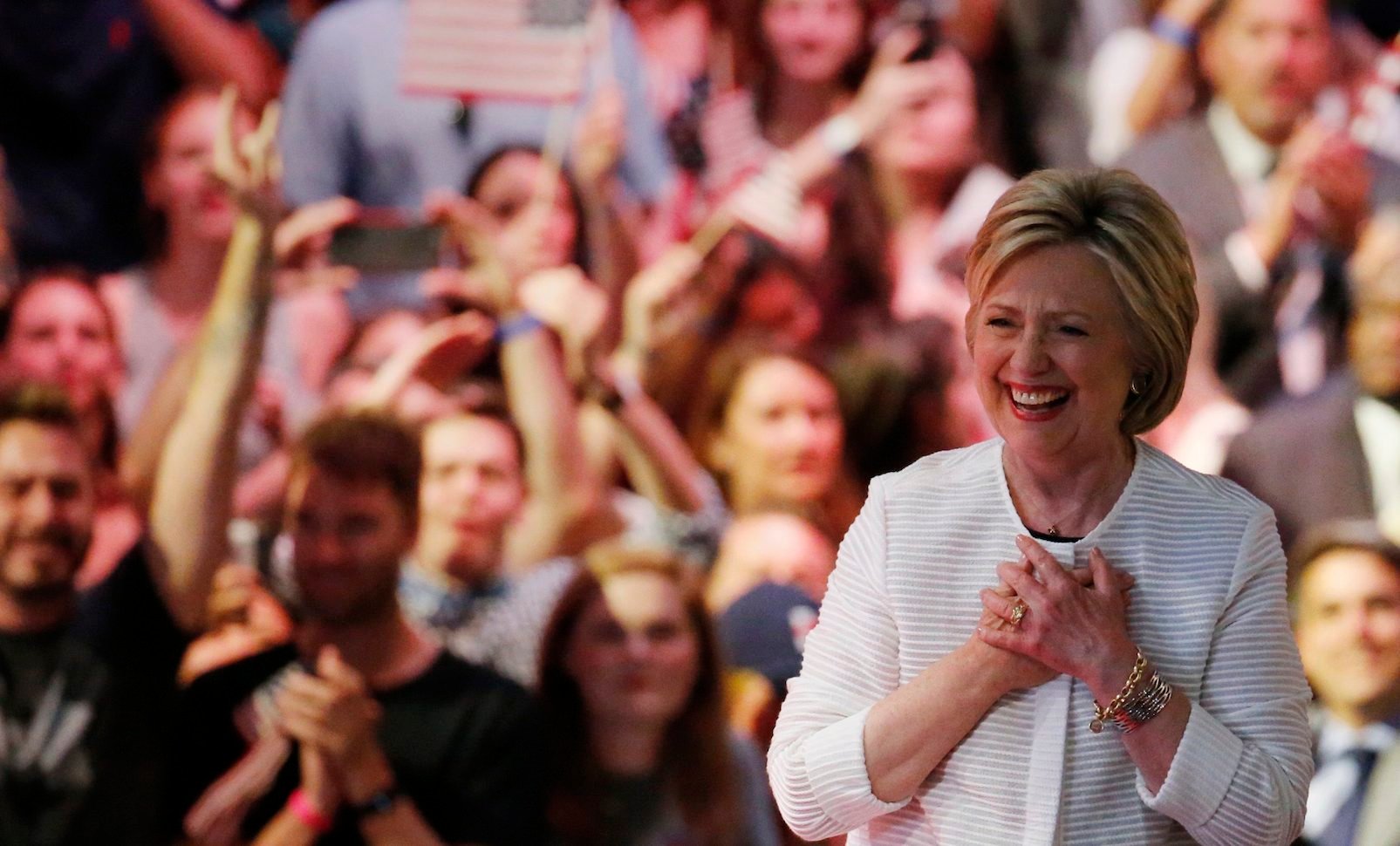 Hillary Clinton flung herself into the general-election campaign with an embrace of her role in history as the first woman ever to win the presidential nomination of a major American political party.

She celebrated her clinching of the Democratic nomination by tweeting, playing a video, and speaking about the U.S. women’s movement’s slow, generations-long slog toward this moment.

It’s a theme she avoided in her first presidential run in 2008. She barely mentioned it in this year’s primaries. But she repeatedly referred to it as she locked up the nomination Tuesday.

“To every little girl who dreams big: Yes, you can be anything you want — even president,” she tweeted, as the results rolled in during the final set of major primaries, which cemented her edge over Sen. Bernie Sanders.

“Tonight is for you.”

She strode to the stage at a Brooklyn victory rally after a video showed scenes from past feminist battles. She made a tongue-in-cheek reference to the glass ceiling above the stage.

She referred to her own mother being born on the day in 1919 that women won the right to vote. And she opened her speech with a reference to the 1848 conference on women’s rights a few hours north, in Seneca Falls, N.Y.: “(This) belongs to generations of men and women,” she said. “We owe so much to all those who came before.”

Standing athwart her path to history is Donald Trump.

The presumptive Republican nominee made it clear that he will launch stinging attacks on Clinton’s character, promising to deliver an entire speech on the topic next week.

In his own victory speech Tuesday, Trump essentially accused her of multiple illegal acts. One, he suggested, was her use of a private email server for government work.

The FBI is still investigating that.

Trump expressed surprise she hasn’t been charged. He accused her of using the private server to conceal other illegal acts _ involving donations to her family’s charitable foundation from foreign interests that hoped for favours when she ran the U.S. State Department.

But Trump has multiple problems of his own.

For starters, the vast majority of polls show him losing to Clinton _ despite what he says. He also faces a lawsuit over alleged fraud involving Trump University.

The controversy over his real-estate school was compounded by a racially tinged insinuation from Trump that the judge overseeing the case is unqualified to oversee it fairly because his parents were Mexican.

This has reportedly prompted infighting within his campaign and such disgust that some Republicans who’ve endorsed him have either distanced themselves or — in the case of at least one senator — explicitly withdrawn their backing.

Illinois Republican Mark Kirk said he cannot, and will no longer, support Trump: “Donald Trump does not have the temperament to command our military or our nuclear arsenal.”

The Republican nominee appeared to shift gears. After reportedly fuming at aides’ suggestions that he stop discussing the lawsuit, he announced Tuesday that he’ll no longer discuss the lawsuit.

He also did something he rarely does: he read his remarks from a script on a telemprompter, sticking to a clear set of messages.

Yet the most unpredictable presidential candidate in memory still offered his customary hijinx. He twice botched the name of the Trans-Pacific Partnership. While calling it a terrible trade deal, Trump referred to it as the “PPP.”

Sanders inspired young progressives who shared his rage at what they view as the corrupting role of money in U.S. politics, and frustration at a political system they see as tilted in favour of business-friendly candidates like Clinton.

Some fumed at the media. In the decision to report that Clinton had already clinched the nomination before Tuesday’s results, some saw an attempt to discourage his supporters from voting Tuesday.

Both Clinton and Trump have made a play for Sanders voters. Although polls suggest the vast majority will back Clinton, a healthy minority have told pollsters they could back the Republican.

Some Sanders supporters have other plans.

During one recent rally in California, Kate Tanaka said she’d likely vote for the Green party’s Jill Stein if her favourite candidate didn’t win the nomination.

She views Clinton as another corporate-friendly, status-quo figure. Like actress Susan Sarandon, she brushed off the idea she needed to vote Democrat to stop Trump.

“The Democratic party, that’s been their strategy for so many years. They say, ‘We’re bad but they’re worse,”’ Tanaka said.

“Well, I’ll face the worse rather than support the bad.”