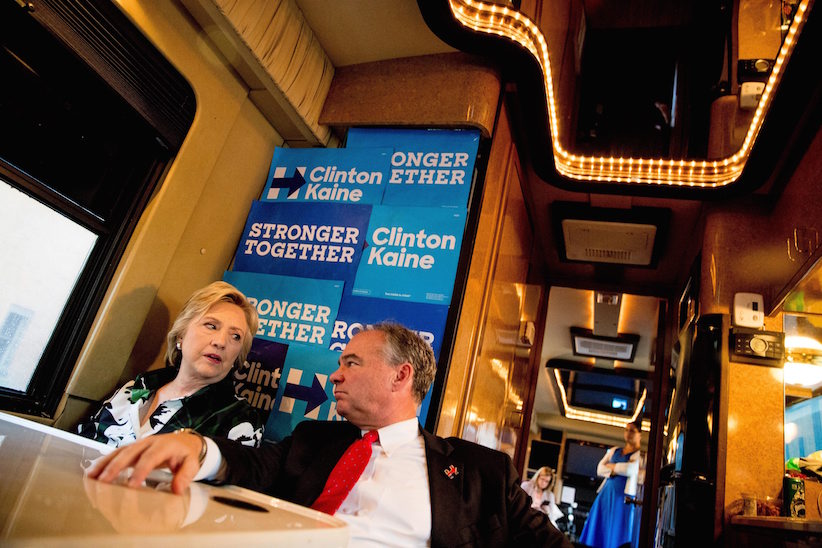 CLEVELAND — Hillary Clinton defended the bereaved parents of a Muslim U.S. Army captain, saying Donald Trump has a “total misunderstanding” of American values and has inflamed divisions in American society. Her comments came after the Republican nominee refused to back down from his criticism of the Gold Star parents’ remarks.

Making her most extensive statements about the Khan family since Trump criticized their Thursday night convention appearance, Clinton expressed concerns about the GOP nominee’s character, saying he repaid a family that made the “ultimate sacrifice” with “nothing but insults” and “degrading comments about Muslims.”

“I do tremble before those who would scapegoat other Americans, who would insult people because of their religion, their ethnicity, their disability,” she told parishioners in a Cleveland church on Sunday morning. “That’s just not how I was raised.”

“Am I not allowed to respond?” Trump tweeted. “Hillary voted for the Iraq war, not me!”

It was the latest bitter rhetorical volley between the defiant Republican candidate and the family of a fallen soldier since the two parties concluded their major conventions last week and the nation looked ahead to a close election this November.

Yet again, Trump left Republican leaders facing demands to denounce their party nominee and overshadowed Clinton’s campaign message with controversy. Joined by running mate Sen. Tim Kaine and her husband, former president Bill Clinton, the Democratic nominee was in the midst of a post-convention bus-tour through Ohio and Pennsylvania.

At last week’s Democratic National Convention, Pakistan-born Khan told the story of his son Humayun who received a Bronze Star and a Purple Heart after he was killed in Iraq in 2004. Khan questioned whether Trump had ever read the Constitution and said “you have sacrificed nothing.”

During the speech, Khan’s wife, Ghazala, stood quietly by his side.

“If you look at his wife, she was standing there. She had nothing to say. She probably, maybe she wasn’t allowed to have anything to say. You tell me,” Trump said, in an interview with ABC’s “This Week.”

Ghazala Khan responded Sunday in an opinion piece published in the Washington Post, saying talking about her son’s death 12 years ago is still hard for her. When her husband asked if she wanted to speak at the convention, she said she could not.

“When Donald Trump is talking about Islam, he is ignorant,” she wrote. “If he studied the real Islam and Qur’an, all the ideas he gets from terrorists would change, because terrorism is a different religion.”

Her husband told television talk shows on Sunday that he appreciated Trump’s later comments that his son was a hero but that he had no “moral compass.”

At one point, Trump had disputed Khan’s criticism that the billionaire businessman has “sacrificed nothing and no one” for his country.

Senior Republican leaders, including House Speaker Paul D. Ryan and Senate Majority Leader Mitch McConnell, remained silent on Sunday, as did vice-presidential nominee Mike Pence, even as calls mounted for them to denounce their party nominee — including from Khizr Khan.

A few Republicans spoke out: John Kasich, the Ohio governor who sought the GOP presidential nomination, said on Twitter, “There’s only one way to talk about Gold Star parents: with honour and respect. Capt. Khan is a hero. Together, we should pray for his family.”

Trump, who had no campaign events scheduled this weekend, released a statement late Saturday night calling Humayun Khan “a hero” but disputing his father’s characterization.

“While I feel deeply for the loss of his son, Mr. Khan who has never met me, has no right to stand in front of millions of people and claim I have never read the Constitution, (which is false) and say many other inaccurate things,” said Trump.

Trump’s rebuke was unusual in the world of politics where officials only speak well of families whose loved ones die in service to their country. When Cindy Sheehan, who lost her son in Iraq, staged prolonged protests on the war, then-President George W. Bush responded by saying that the nation grieves every death.

When asked about the mother of a State Department official killed in Benghazi, Libya, who blamed Hillary Clinton for her son’s death, Clinton told “Fox News Sunday” that her “heart goes out” to the families and that she didn’t “hold any ill feeling for someone” who has lost a child and recalls events differently.

Clinton used her first television interview since officially clinching the Democratic nomination to cast Trump as dangerously pro-Russia and an unknown quantity for U.S. voters. She said she realizes that people often see a “caricature” of herself as a politician but that she hopes American voters will review her track record as a U.S. senator and secretary of State.

“He’s not temperamentally fit to be president and commander in chief,” she said.