Clinton vs. Trump: Whose speech hit the right note?

Which candidate did a better job of delivering a speech that hit just the right emotional notes to win over voters? The study of language intensity provides one lens to compare the performances of the candidates.

This line of research focuses on word choice, not the way a speech is delivered, to evaluate how well a message is received. It doesn’t consider the strength of performance – so nonverbal components and other elements such as volume or pitch are not part of the analysis.

At Ohio State University’s School of Communication, I used my background in political speech writing to extend this well-established field into political speech – like Clinton’s and Trump’s speeches – by running two experiments.

A focus on intensity

In a paper to be published in Presidential Studies Quarterly before the election, my coauthors Paola Pascual-Ferrá and Michael J. Beatty and I created speech excerpts for hypothetical presidential candidates and tested their effect on 304 participants drawn from political science and communication classes at the University of Miami.

We found that voters who are optimistic about their personal economic situation prefer presidential candidates who use restrained language. This type of language is called “low intensity.” On the other hand, voters who are fearful about the future  of the economy are more likely to trust candidates who  reflect back their emotional turmoil – those who use high-intensity language.

Trump’s acceptance speech last week was largely high-intensity. On foreign policy he said, “Libya is in ruins. Our ambassador was left to die at the hands of savage killers” and “Iraq is in chaos.”

About his rival, he said, “The situation is worse than it has ever been before. This is the legacy of Hillary Clinton. Death, destruction, terrorism and weakness.”

Some commentators referred to Trump’s speech as “dark” or “apocalyptic.”

But in terms of language intensity, similar observations have been made by rhetorical analysis of past convention nomination speeches. Reagan’s 1980 speech framed government as the devil. In 1932, Herbert Hoover and Franklin Roosevelt each hurled high-intensity barbs at his opponent’s economic philosophy. For example, FDR warned that the “danger of radicalism is to invite disaster” while Hoover said “to remedy present evils a change is necessary.”

In Hillary Clinton’s speech, we also saw examples of both low- and high-intensity language. She said, “We have to decide whether we can all work together so we can rise together.” But she also said, “America is once again at a moment of reckoning.”

So what does language intensity research say about how these rhetorical decisions will play with the voters? 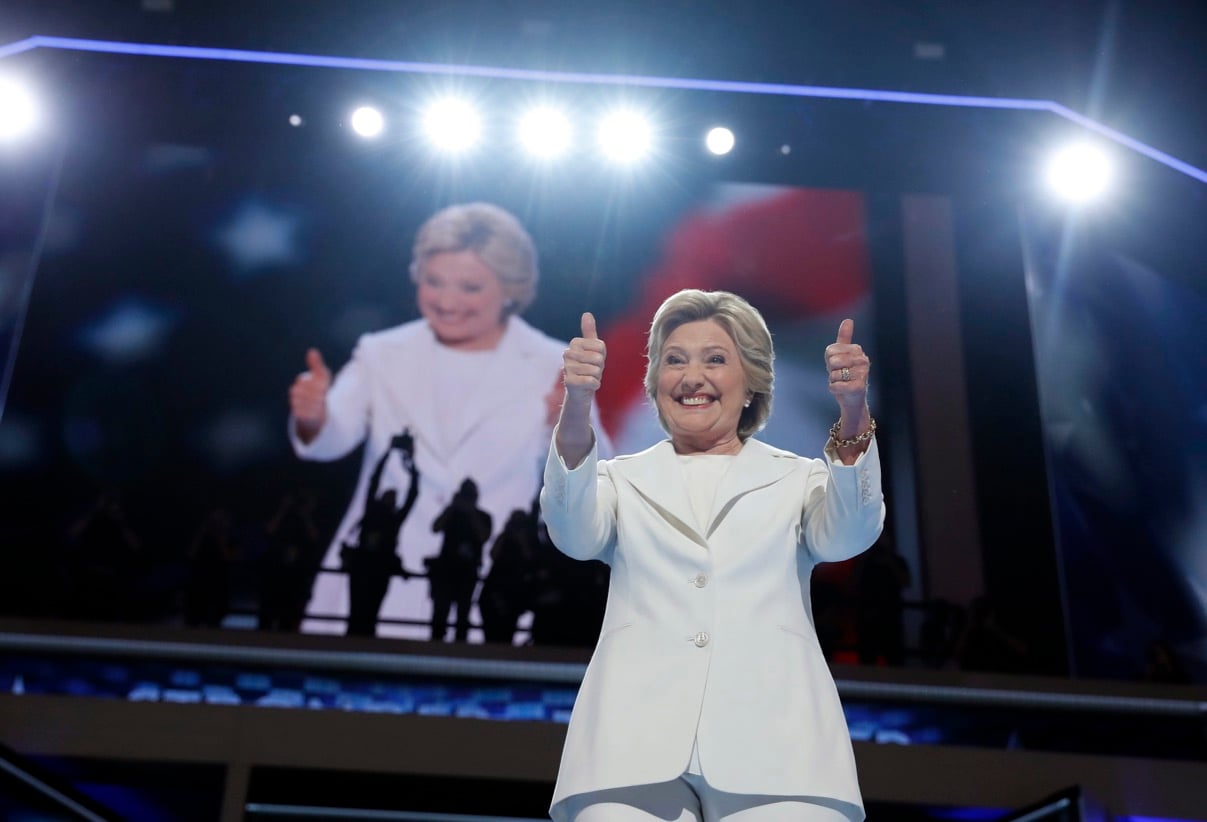 Democratic presidential nominee Hillary Clinton gives her thumbs up as she appears on stage during the final day of the Democratic National Convention in Philadelphia, Thursday, July 28, 2016. (AP Photo/Carolyn Kaster)

For much of the twentieth century, researchers found conflicting results in language intensity experiments.

Initial studies indicated people were turned off by emotional messages. There is a “boomerang effect” when an emotional message backfires. But in the ’50s, Yale professors led by Carl Hovland found that the stronger language resulted in the most compliance with the speaker’s persuasive plea.

Later studies added nuance to our understanding. Researchers like Gerald R. Miller and Michael Burgoon,Claude Miller and Josh Averbeck have explored factors that interact with language intensity. For example, the speaker’s background and experience matter in bolstering credibility. Certain speakers have a wider latitude of acceptance before they even open their mouth. For example, voters might consider Clinton’s service as Secretary of State when she is speaking about foreign policy or Trump’s business background when talk turns to turning around the economy.

Also, when it comes to language intensity, there appears to be a gender bias. Decades of studies have shown that persuasive speeches ascribed to a female name are perceived more aversely–by both males and females–than the same message ascribed to a male. This could inform the presidential race if Clinton uses high-intensity language which triggers a boomerang effect simply on account of her gender. It helps explain Ivanka Trump’s relative success in introducing her father last week; she kept her language mild by comparison to her father’s.

Other researchers found somewhat conflicting results, showing that the effects of language intensity depend on the audience’s expectations. For example, if people expect Trump to use high-intensity language than it would have less of a boomerang effect than other politicians who may try to use emotional rhetoric.

In a second paper, published in the Journal of Political Marketing, my coauthors and I tested hypothetical presidential candidates. As before, the candidates varied in language intensity and were not ascribed characteristics of gender, party identification or ideology.

Unlike the first experiment, the candidates’ professional backgrounds differed. One was a two-term governor. The other had no political experience but had worked in business and owned a national franchise.

We looked at how the interaction of a presidential candidate’s language intensity and background affected perceptions of authoritativeness and character.

We found that language intensity did not have a direct effect on authoritativeness. Perceptions of authoritativeness seemed to purely be a function of a politician’s résumé. But a presidential candidate using low-intensity language was perceived as having significantly more character.

At the DNC, Clinton needed to use her speech to seize the issue of the economy as well as perceptions of her own trustworthiness. The latest CNN/ORC poll indicates 68 percent of voters consider her dishonest and untrustworthy. The same poll reveals Trump becoming slightly more favorable but shows that 55 percent of respondents still consider him dishonest and untrustworthy. The top issue of concern to voters — resonating nicely with our study – is the economy.

In Trump’s acceptance speech he spoke of the economy in relatively extreme terms. He said the nation is suffering from “disastrous trade deals” that have been “destroying our middle class,” but “I’m going to make our country rich again. I am going to turn our bad trade agreements into great ones.”

Clinton spoke of the economy in strong terms, too. “Some of you are frustrated, even furious, and you know what? You’re right,” she said. But Clinton also let a little optimism come through, framing the nation as recovering from “the worst economic crisis of our lifetime.”

The relative success of each may boil down to which candidate does better matching his or her language intensity with respective audiences.

Who struck the right note? Whose rhetoric seemed trustworthy and presidential? The answer to that may depend on whether voters feel they are in good or bad economic times.