Land of the free? The U.S. has a prison problem

In a gridlocked political system, there’s one thing most lawmakers agree on: It’s time to fix America’s justice system 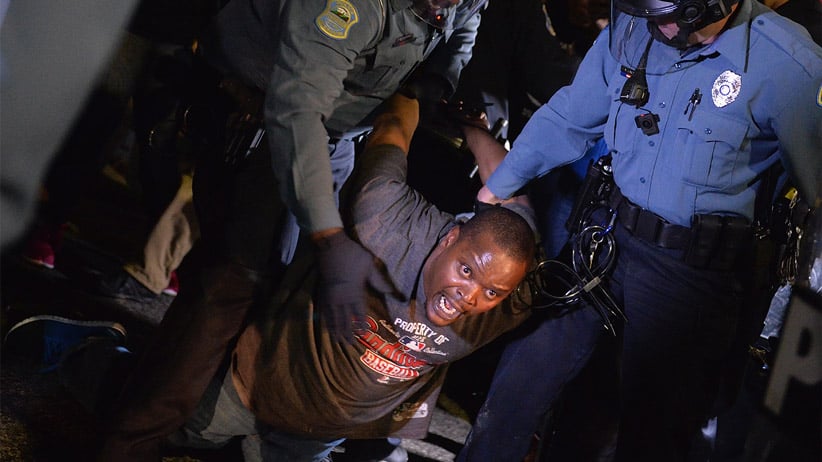 Since 1990, Missouri’s Hedy Harden has been lobbying for criminal justice reforms in the Midwestern state. On March 11, the 70-year-old chair of the Missouri branch of CURE­—a national criminal-justice-reform organization founded in 1972—joined other like-minded activists for a lobby day in the state capital of Jefferson City to pressure lawmakers to pass a handful of bills aimed at reducing the state’s mandatory-minimum laws and other reforms.

Missouri’s prison system cost state taxpayers some $680 million in 2014—up from $220 million in 1994 after the state brought in harsh sentencing legislation that curbed early prison release. Its prison population has since increased nearly nine times over the past three decades, mirroring similar trends across the U.S.

And while Harden has 25 years under her belt advocating for changes to Missouri’s justice laws—and is growing increasingly skeptical that proposed legislation will ever make it into law—the case for criminal-justice reform is riding a wave of support across the United States.

That support has been spurred by a combination of budgetary constraints, prison overcrowding, shifts in public attitudes and a media spotlight trained on events such as the shooting death of 18-year-old Michael Brown in August in Ferguson, Mo., by police officer Darren Wilson, and the subsequent nationwide protests and scrutiny of policing and the criminal justice system. “Definitely, we all had some really high hopes because of Ferguson,” Harden says, “and we know the legislature has to deal with the whole issue of Ferguson.”

The results of the federal justice department’s investigation into the Ferguson police force in the wake of the shooting, released in early March, uncovered a municipal justice system rife with racial bias and geared more toward generating revenue for the St. Louis suburb than any concern for public safety. The federal probe found that, according to the police department’s own statistics, between 2012 and 2014, blacks accounted for 85 per cent of traffic stops, 90 per cent of citations, and 93 per cent of arrests made by Ferguson police, despite making up 67 per cent of the city’s population. They also faced significantly more citations for minor offences and bore the brunt of documented force by police. The municipal court, meanwhile, routinely ordered arrest warrants for residents who failed to pay fines for minor infractions such as traffic tickets and parking violations. 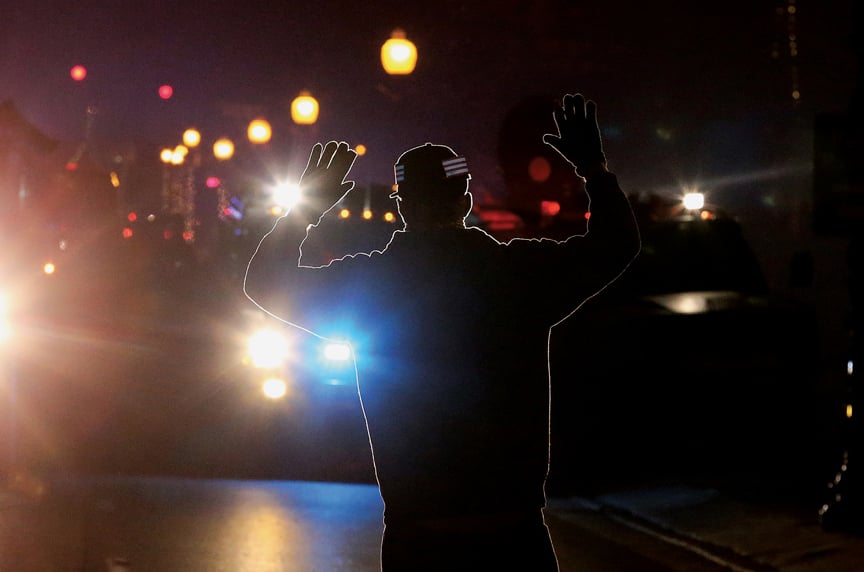 A protester stands in front of police vehicles with his hands up during a demonstration on November 24, 2014 in Ferguson, Missouri. (Justin Sullivan/Getty Images)

President Barack Obama cited Ferguson—as well as other recent high-profile police-related deaths in New York and Cleveland—in his March 7 speech in Alabama on the 50th anniversary of the Selma-to-Montgomery civil rights marches. “We can make sure our criminal justice system serves all, and not just some,” he said. “Together, we can address unfair sentencing and overcrowded prisons, and the stunted circumstances that rob too many boys of the chance to become men, and rob the nation of too many men who could be good dads, and good workers, and good neighbours.”

In Washington, Obama isn’t alone in calling for change in how America handles matters of crime and punishment. Criminal-justice reform has turned into a rare point of bipartisan consensus in a Congress that’s become synonymous with partisanship, gridlock and division.

The U.S. is currently the world’s largest jailer, with roughly 2.2 million people behind bars. According to data compiled by the American Civil Liberties Union (ACLU), maintaining that prison system cost American taxpayers $80 billion in 2012. In 2013, the U.S. had an incarceration rate of 716 prisoners for every 100,000 Americans. (By comparison, according to stats from the Sentencing Project, Canada’s incarceration rate is 118 per 100,000.) And, since 1980, the federal prison system grew nearly 800 per cent, with some 219,000 people behind bars.

Policy-makers such as outgoing Attorney General Eric Holder are now increasingly likely to talk about being “smart on crime” instead of “tough on crime,” and there is a raft of proposed legislation meant to fix the system. The Smarter Sentencing Act, introduced in February in the Senate by Utah Republican Sen. Mike Lee and Illinois Democratic Sen. Dick Durbin, and in the House by Republican Raul Labrador and Democrat Bobby Scott, would reduce the mandatory minimum sentences for non-violent drug offenders, along with other measures.

A prison-reform bill also introduced last month by Texas Republican and Senate majority whip John Cornyn and Rhode Island Democrat Sheldon Whitehouse, aims to shrink the federal prison population by offering incentives to low- and medium-risk prisoners to participate in recidivism-reduction programs. And, last week, Kentucky Republican Sen. Rand Paul (a potential presidential candidate), along with New Jersey Democrat Cory Booker, introduced the Redeem Act. That sweeping legislation would reduce the collateral problems former prisoners face when voting and seeking housing and employment. It would also make it easier for juveniles and adults convicted of non-violent offences to seal their criminal records, among other provisions. These and similar bills have been introduced in prior sessions of Congress in the past few years, but failed to gain real traction.

Groups such as the ACLU say increasingly harsh sentencing and parole policies, the war on drugs and rising parole revocations are behind the spike in the U.S. prison population over the past three decades. Recently, however, sentencing reforms at the state level have helped to spur the first drop in prison populations in decades—a modest overall decline (2.8 per cent) between 2009 and 2012.

Those state-level successes—which federal lawmakers are using as a launching pad for their own reform initiatives—mean advocates for criminal-justice reform are optimistic. “I do think something significant will happen this year. I think the stars are really aligned,” says Marc Levin, co-founder of the advocacy group Right on Crime, and a prominent voice in the conservative criminal-justice-reform movement. “[It] is such a rarity in a gridlocked system [to find] actual agreement. I think there’s a desire on the part of many Republicans, and many of the consultants to Republicans, to show they’ve got a positive agenda, that they can govern and get something done. There’s a real breakthrough, where there’s something in it for everyone.”

Levin also has prominent conservatives lined up behind him: Big-name Republicans such as Newt Gingrich, presumptive 2016 frontrunner Jeb Bush, and Arkansas governor and former U.S. Drug Enforcement Administration head Asa Hutchinson have all signed on to his organization’s statement of principles. Jesselyn McCurdy, who works with the ACLU in Washington to get members of Congress on board with criminal-justice reform, agrees the timing is right. “Any successes we have at the state level we’re hoping to translate to the federal level,” she says.

Related: Martin Patriquin on the truth about race, the police and Ferguson

In November, the ACLU netted $50 million from liberal billionaire benefactor George Soros’s Open Society Foundations to push at the state level to reduce prison populations. (State prisons house criminals convicted of state crimes, including rape, murder and violent gun crimes. Federal prisons hold those convicted of federal offences, such as securities or mail fraud to bank robbery and involvement in organized crime.) Soros has also joined forces with the conservative Koch brothers and other groups (including the ACLU and Right on Crime) to form the new Coalition for Public Safety, billed as “the largest national effort working to make our criminal justice system smarter, fairer and more cost-effective at the federal, state and local level.”

The partnership between the Kochs and Soros—who, typically, spend their fortunes as political rivals—raised eyebrows in Washington. But in a January op-ed in Politico magazine, Charles Koch made the case for reform, writing: “Overcriminalization has led to the mass incarceration of those ensnared by our criminal justice system, even though such imprisonment does not always enhance public safety. Indeed, more than half of federal inmates are non-violent drug offenders. Enforcing so many victimless crimes inevitably leads to conﬂict between our citizens and law enforcement.”

Still, while there’s broad agreement that the current prison system isn’t sustainable, not everyone agrees on the proposed blueprints for reform. In Congress, those skeptics include Iowa Republican Sen. Chuck Grassley, who, as head of the Senate judiciary committee, holds sway over which reform bills end up on the legislative agenda. On the Senate floor this past week, Grassley voiced strong opposition to the Smarter Sentencing Act, saying the arguments for it “are merely a weak attempt to defend the indefensible,” and pointing to examples such as growing heroin use in states such as Vermont. He also expressed misgivings that the legislation could impede efforts to curtail major drug-trafficking operations, or that it would allow repeat offenders to avoid serious jail time.

In California, Proposition 47—a ballot initiative passed last November with nearly 60 per cent support that reclassifies some drug and theft crimes from felonies to misdemeanours—is also facing opposition from critics who argue it’s a flawed and dangerous measure. David Bejarano, president of the California Police Chiefs Association, argues that Prop 47 has: scrapped felony charges for possession of substances such as the date-rape drug; created a loophole for handgun theft; and removed a legal tool used by law enforcement to force people into drug rehab in lieu of jail time. “Other states are watching what California does. What we’re trying to do now through our legislature is correct some of the most obvious concerns we have,” he says.

In Missouri, there’s another campaign building to pass House Bill 657, which would reduce the state’s so-called “85 per cent law.” The Republican-sponsored bill would lower the threshold of time served before being eligible for parole for certain dangerous felonies (arson, robbery, and assault) from 85 per cent of the sentence to 50 per cent. Even with that push, and a slew of of bills aimed at reforming everything from those mandatory minimums to juvenile justice and the death penalty, Harden called the state legislature “a tough nut to crack.”