Donald Trump wings it at a Boeing event turned quasi-rally, while James Mattis reaffirms NATO. Another newsworthy day from the Trump White House 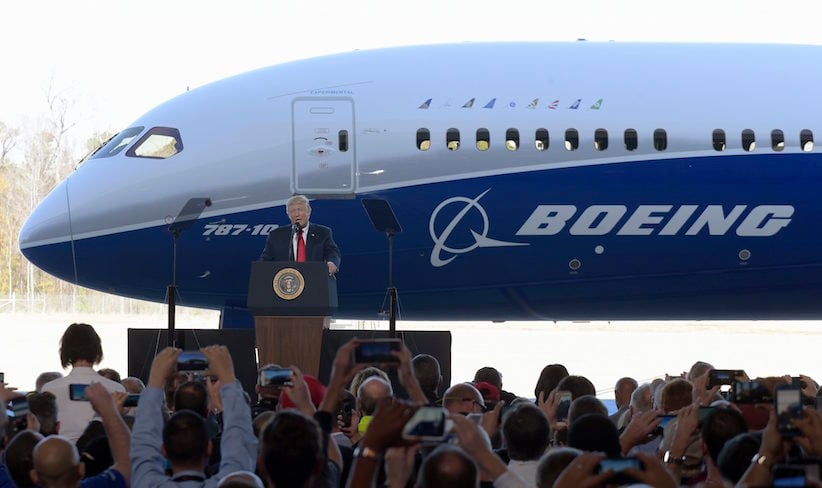 President Donald Trump speaks in front of the Boeing 787 Dreamliner while visiting the Boeing South Carolina facility in North Charleston, S.C., Friday, Feb. 17, 2017. Trump visited the plant before heading to his Mar-a-Lago estate in Palm Beach, Fla. for the weekend. (AP Photo/Susan Walsh)

Back on the campaign trail?

Though it’s been months since he won the election, President Trump’s speech for the unveiling of Boeing’s latest aircraft had the feel of a campaign rally. His speech at the event in South Carolina offered no new economic policy or agenda, but mostly appeared to be an endorsement for the American-made jetliner. “We’re here today to celebrate American engineering and American manufacturing,” Trump said.

So, about that press conference

Trump tweeted out his thanks Friday morning to everyone—notably radio host Rush Limbaugh—for all the positive comments after his press conference yesterday. To recap: he assumed a reporter was friends with the Congressional Black Caucus because she was black, he ordered a Jewish magazine’s reporter to sit down after Trump himself said he was the “least anti-Semitic person you’ve ever seen in your entire life,” and he confused many by saying the reported leaks about his staff’s contact with Russia were real but the news on them nonetheless fake.

So the list of those who were positive weren’t particularly deep. Still, Limbaugh called it “one of the most effective press conferences I have ever seen.”

Thank you for all of the nice statements on the Press Conference yesterday. Rush Limbaugh said one of greatest ever. Fake media not happy!

Trump’s Cabinet is slowly filling up as his picks make their way through Senate confirmation. Friday’s latest addition was Scott Pruitt, who was formally confirmed to head the Environmental Protection Agency (EPA), despite the fact that he is a climate-change skeptic. But Pruitt does know the EPA quite well; after all, he’s sued them more than a dozen times over the past eight years.

A long way from obsolete