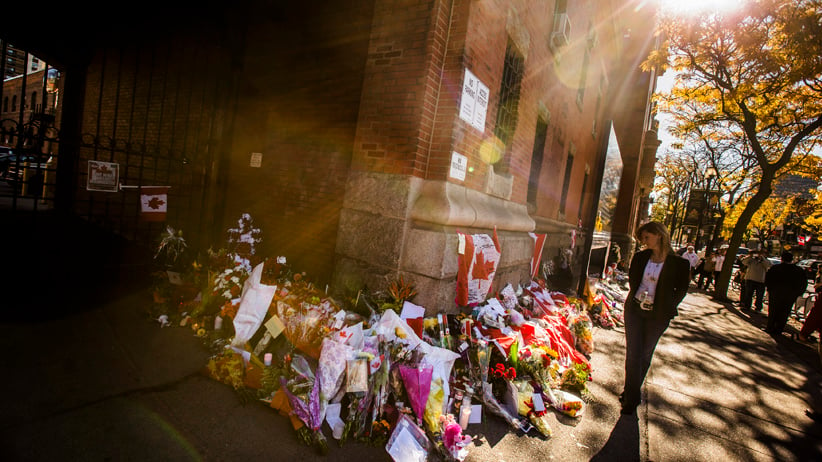 Last year, the head of Canada’s security agency delivered a warning to the Canadian Senate.

“Five years ago, we weren’t as worried about domestic terrorism as we are now,” said Richard Fadden. He explained why: In the 1990s and early 2000s, Islamic terrorism was perpetrated by structured organizations with lines of command—groups like al-Qaeda and Somalia’s al-Shabab. But the U.S.-led anti-terrorism coalition had smashed the leadership of these groups, and left behind a motley bunch of autonomous freelancers whose plots were much “harder to get your hands on.” Western intelligence agencies were seeing far fewer large-scale plots such as those that did so much damage in New York, Washington, Bali, Madrid and London in the early 2000s, Fadden continued, but they were collecting much more chatter about smaller-scale threats against less predictable targets.

Fadden’s prophecy has been all too tragically vindicated this week. On Monday, a French-Canadian convert to Islam drove his car at two Canadian soldiers in the small city of Saint-Jean-sur-Richelieu, southeast of Montreal. One soldier was killed. The assailant was shot and killed by police after a high-speed car chase. Wednesday brought a spectacular attack on the National War Memorial and Parliament in Ottawa. Again, a soldier was killed, before the assailant himself was reportedly felled by the sergeant-at-arms of the House of Commons. This attacker, too, was a Canadian-born Muslim convert, the son of a French-Canadian woman and (according to recent press reports) a Libyan man who had immigrated to Canada.

The hit-and-run driver in Saint-Jean-sur-Richelieu, Martin Couture-Rouleau, appeared on a list of 90 persons monitored by Canadian police and had been identified as a “high-risk traveller”; he was arrested last summer when he tried to leave the country for the Middle East. Official sources have not said anything about whether Couture-Rouleau and the Ottawa shooter, Michael Zehaf-Bibeau, were acquainted or connected in any way. Former public safety minister Stockwell Day, however, told The Daily Beast on Wednesday that the two men may have visited the same Internet chat rooms. Islamic State has promoted using cars as weapons against Westerners, though it remains unclear whether Couture-Rouleau drew inspiration from the extremist group.

Since 2006, Canadian security has thwarted many localized plots—two in 2013 alone. At a July 1 Canada Day celebration in front of the British Columbia legislature, two Canadian-born converts to Islam intended to detonate homemade pressure-cooker bombs, police charge. Two non-citizens—one Palestinian, one Tunisian—were arrested in April 2013 for allegedly plotting to derail a passenger train.

A lot of energy is wasted debating whether do-it-yourself jihadists should be called “terrorists.” The Obama administration notoriously insisted on describing the Ford Hood shooting of 2009 as an incident of “workplace violence,” not terrorism. The killer at Fort Hood, Maj. Nidal Malik Hasan, was perceived by colleagues as mentally troubled long before he opened fire, killing 13 and wounding 32 more.

Judging by media reports, Zehaf-Bibeau likewise could be described, if one wished to eschew the T-word, as a troubled misfit with a long record of petty criminality. On the other hand, what kind of person would one expect jihadists to recruit from inside a Western society? In countries like Canada, Australia, Britain and the United States, the call to Islamic holy war often appeals to more marginal people: the thwarted, the troubled, the angry. Yet, even so, the killer in Quebec—Couture-Rouleau—reportedly had a clean police record and a reasonably stable personal life until his conversion to Islam. He owned a pressure-washing business and lived in a single-family home with his father.

If you are alienated, angry and attracted to violence, radical Islam provides a powerful ideology of justification. If you are lonely and purposeless, it offers redemptive self-sacrifice. (One report claims that Couture-Rouleau persuaded “four or five” friends to convert to Islam with him.) Until roughly 1960, French-speaking Quebec ranked as one of the most Catholic societies on Earth. In the late 1950s, more than 80 per cent of French Quebeckers could be found at mass on Sundays, according to one famous estimate. Then, abruptly, in the short span of years from 1960 to 1980, religion seemed almost to vanish from the province. It’s been aptly said that, from the point of view of religious observance, “centuries, not decades” separated the Quebec of the 1980s from the Quebec of the 1950s. Yet, the hunger for meaning is always a part of the human spirit. In a different time, Couture-Rouleau might have vanished into a monastery. In the 21st century, he found a different and deadlier path. The alleged would-be British Columbian bombers might likewise have gravitated to Maoism in the 1960s or Nazism in the 1930s. But those ideologies, too, have lost their hold on the modern mind, leaving radical Islam as the strongest competitor for the credence of those who seek self-fulfillment through mass destruction.

Like other advanced democracies, Canada is a lightly policed society. It is also a society that has imposed on itself extraordinary legal difficulties before dangerous non-citizens can be removed from its territory. One of the two men who allegedly plotted the 2013 train derailment arrived in Canada with his family in 1993 using a fake passport. First, the family sought refugee status on the grounds that they had been victimized by anti-immigrant gangs in Germany, their previous place of residence. When that plea was rejected, most of the family sought and gained residency as stateless Palestinians. The suspected train plotter, Raed Jaser, was denied residency because, by the time the courts got around to hearing his case, he’d accumulated a lengthy criminal record. But since neither the United Arab Emirates (where he was born), nor Saudi Arabia (where his mother was born), nor the Palestinian Authority (where his father came from) accepted responsibility for him. In Canada, he stayed. He’ll now be staying somewhat longer and, perhaps ultimately, as long as Mahmoud Mohammad Issa Mohammad, a Palestinian terrorist who entered Canada in 1987 with false papers and was ultimately deported only after a 26-year legal battle.

Despite its self-image as a peaceable land, Canada has not escaped political violence. In the mid-1960s, Quebec separatists launched an escalating campaign of bombings and attempted kidnappings: 160 violent attacks that killed eight people and wounded dozens more before the terrorists were finally suppressed in 1970-71. In 1985, Sikh terrorists blew up an Air India flight from Montreal to London mid-flight, killing 329 people, 268 of them Canadian citizens, in the worst terrorist atrocity in Canadian history. Canadian soil has been troubled—and Canadian lives have been lost—as a result of Palestinian terrorism, Tamil terrorism, and domestically inspired violence of the far left and far right.

Since 2001, political violence (both plotted and executed) in Canada and against Canadians has overwhelmingly been inspired by the teachings of radical Islam. Our era’s foremost ideology of murder has found a home inside Canada, too. Canadian law, Canadian institutions and the Canadian government must adapt to the threat accordingly. After the shock and sorrow of October 2014, they surely will—as they have so successfully adapted and surmounted much greater threats in generations past.

David Frum is a senior editor at The Atlantic.