Day 1 of the DNC: What a Monday it was

Betrayal, deceit, conspiracy, celeb appearances—and that was only day one at the Democratic convention 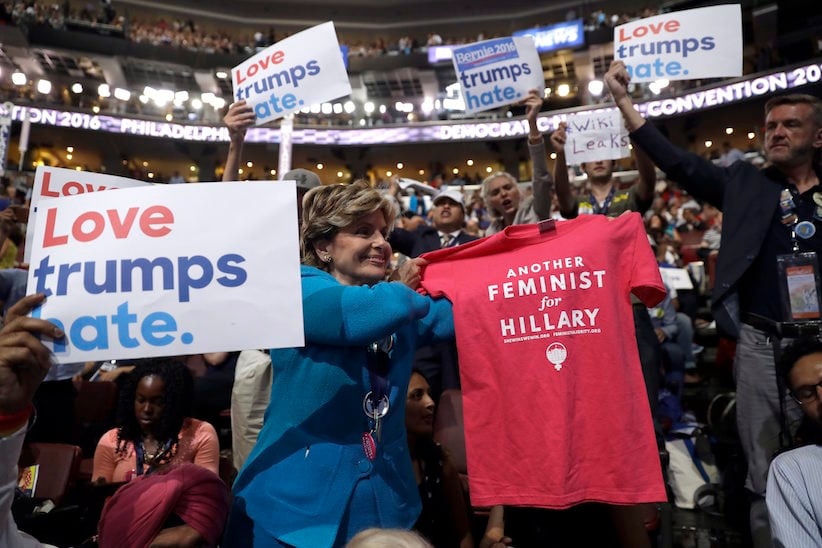 Thunderous boos, slandered Jews, and cyberclues suggesting that thousands of conspiratorial pro-Hillary Clinton emails been hacked by Boris Badenov and his Fearless Leader lent a Cold War chill to the opening session of the Democratic Party’s quadrennial convention on one of the hottest days in Philadelphia history.

What a Monday it was. Hours before the gavel was hammered down at the sweltering home of the NHL Flyers to begin a marathon of perfervid Donald Trump-bashing by more than 50 speakers of every race, religion, national origin, immigration status and sexual orientation—not to mention Sarah Silverman, Paul Simon, Eva Longoria, Sen. Al Franken and Michelle Obama—the party’s chairperson had been booed off the stage and forced to quit.

Sen. Bernie Sanders, the pure-wool Israelite from Brooklyn, had been hooted at by his own defiant supporters after being smeared as an atheist by holier-than-he party bigwigs, and the acclamation of Hillary Clinton as—finally!—the Democratic nominee for the presidency after eight long years had suffered yet another embarrassing step backward. 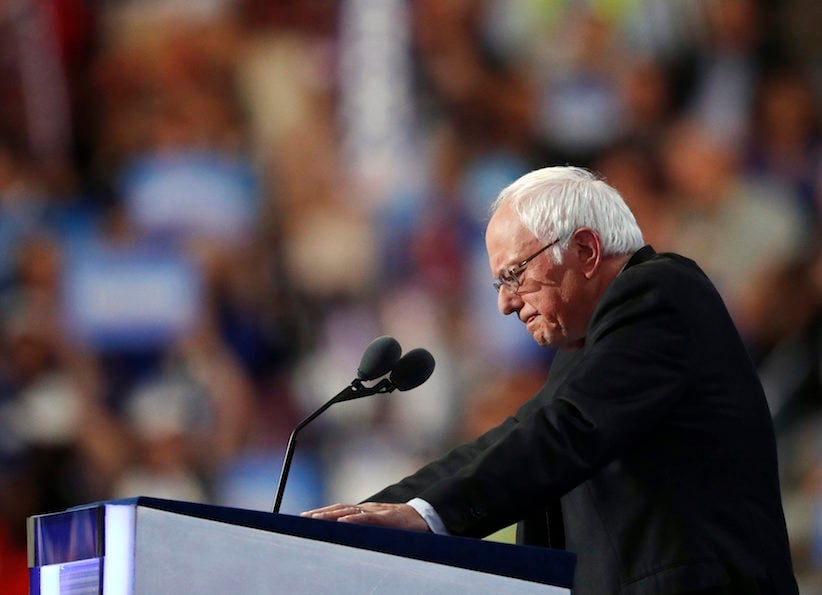 As it became more and more clear from thousands of Wikileaked emails that the Democratic primary process had been anything but kosher, Clinton World blamed Vladimir Putin personally for the hack, claiming that Russia’s leader was trying to ensure the election for Donald Trump.

MORE: Jaime Weinman on what the DNC risked by making Sanders the star

Meanwhile, back in Philadelphia, thousands of Sanders supporters paraded all the way to New Jersey and back in 37° C heat, carrying signs that said #NEVERHILLARY. And all this happened before Sanders took the stage just before midnight to encourage his feverish acolytes to lay down their swords.

The “revolution continues,” Sanders declared. “The struggle of the people to create a government which represents all of us and not just the one per cent … that struggle continues.” From battling poverty to the high cost of health care and climate change, Clinton, implored Sanders, “will make an outstanding president.”

“I am going to do all that I can to make that happen.”

Unlike Trump, who broke tradition and showed up on the first night, Clinton was in Charlotte, N.C, on the convention’s first day. (Her husband Bill Clinton was in the audience in Philadelphia.)

In her own flawless and polished speech—a hint that the Democratic nomination will be hers for the asking, should she ever choose to seek it—Obama praised Clinton as a battler who, “when she didn’t win the nomination eight years ago, didn’t get angry or disillusioned. Hillary Clinton has never quit on anything in her life.”

(Compare these words to Melania Trump’s address to the Republican convention in Cleveland: “Donald has a deep and unbounding determination and a never-give-up attitude.” Coincidence?)

In 2008, of course, it was Clinton’s husband, the fomer president, who sneered at Barack Obama’s ascent, calling it “the biggest fairy tale I’ve ever seen.”

Feeling the compulsion to insert a racial reference, the first lady praised her own mothering skills by conjuring the image of “my daughters—two beautiful, intelligent, black young women—playing with their dogs on the White House lawn.” And she backhandedly admitted her own husband’s failings to achieve inner-city peace and universal financial comfort by citing “kids who take the long way to school to avoid the gangs. Kids who wonder how they’ll ever afford college.”

Earlier, Silverman, the comedian, had attempted to silence the most ardent of Sen. Sanders’s apostles. “To the ‘Bernie or bust’ people—you’re being ridiculous!”

But this attempt at humourous bubble-bursting flopped. With the (theoretically) pro forma nominating process still to be performed, the revolution that Sanders inspired was no longer his to control. 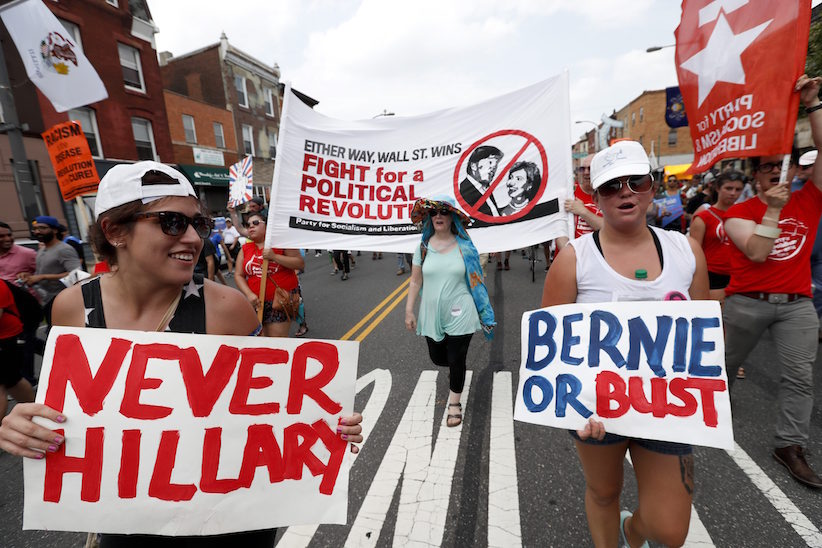 Supporters of Sen. Bernie Sanders, I-Vt., march during a protest in downtown on, Monday, July 25, 2016, in Philadelphia, during the first day of the Democratic National Convention. (AP Photo/Alex Brandon)

“Are you ready to roll over and play nice?” a Maclean’s correspondent asked a clutch of Sanders supporters from the Sunshine State of Florida, whose primary Clinton won by the slim margin of 1,097,400 votes to 566,603 back in March.

“I will never support Hillary Clinton, the 25-year-old Bucek declared. “I will continue to oppose these people: their corruption, their greed. It is unacceptable! It cannot go on!”

Bucek had been present Monday morning when more than 1,700 delegates at a downtown conclave jeered lustily when their mussed-up messiah beseeched them to support the former Secretary of State.

“We weren’t booing Bernie,” she said correctively. “We were booing Hillary’s name.”

Come Tuesday, she promised, “we are going to have a roll call vote and I am going to vote for Bernie Sanders, no matter what he says. This isn’t over.”

“You are going to lose,” Bucek was informed. “And Hillary Clinton is going to be the Democratic nominee.”

“You’re from Canada?” she responded. “Well, then we’re coming to live in your house, whether it’s Hillary or Trump.”

“I won’t roll over, but I will play nice,” said Diana Hatsis-Neuhoff of Palm Beach County, another Sanders delegate. “I will hold my nose and vote for her, but I will hold her feet to the fire.”

Hatsis-Neuhoff, a research neuroscientist, noted that “this isn’t my first rodeo,” and offered a diagnosis of Sanders’s broken-hearted young supporters.

“Those people who were booing, they are injured in their souls,” she said. “And when you are injured, you need time to heal. You can’t just jump and start running. What I’m afraid of is that a lot of those kids are going go home and not vote at all.”

“I cried this morning,” confessed a delegate from Reno, Nev., named Sarah Mahler. “When they booed Bernie, I cried.”