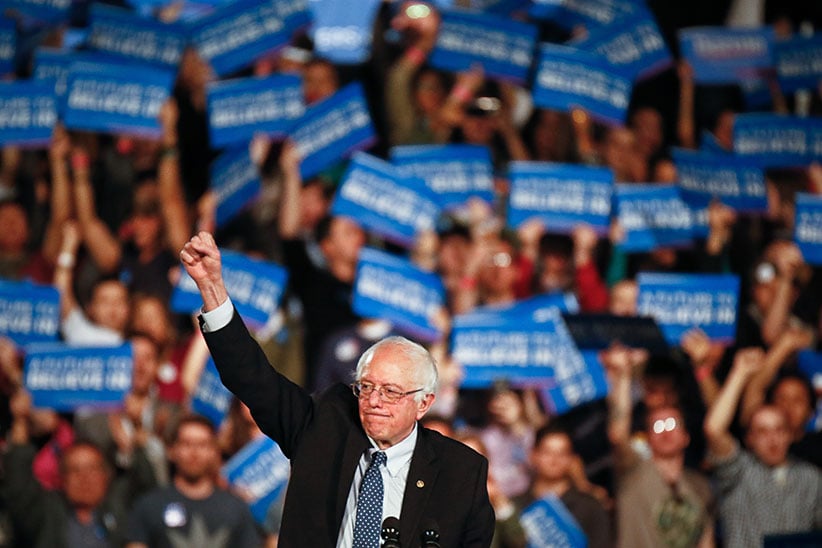 Bernie Sanders thanks supporters after speaking at a rally on February 13, 2016 in Denver, Colorado. (Marc Piscotty/Getty Images)

PHILADELPHIA — The role of superdelegates could be significantly reduced in future Democratic presidential primaries under a compromise deal struck at the Democratic National Convention rules committee Saturday.

Efforts by Bernie Sanders supporters to pass amendments eliminating or limiting the power of superdelegates failed to win approval at the committee meeting in Philadelphia. But campaigns for Sanders and Hillary Clinton worked out an agreement to create a “unity commission” to revise the nominating process, including changing superdelegate rules, which won near-unanimous support.

The 21-member commission will study a number of issues, including how to improve access to caucuses and how to broaden the party’s appeal. For superdelegates, the commission’s recommendation is that Congress members, governors and other elected officials should remain as unpledged delegates, but that other delegates would be bound proportionally to the primary results of their state.

Sanders campaign manager Jeff Weaver endorsed the plan, saying it would “result in the reduction of superdelegates as we know them by two-thirds.” The Clinton campaign also expressed support for the commission.

Any changes to superdelegate rules would still be subject to DNC approval. A report by the commission is due by Jan. 1, 2018.

The compromise came after a lengthy meeting in which Sanders supporters grew increasingly frustrated as their efforts on superdelegates were voted down.

Discussing the proposal to eliminate superdelegates, Aaron Regunberg, a Sanders delegate and a Rhode Island lawmaker, argued that the current system does not reflect “our core values.” But Clinton supporters argued that the superdelegate system brings more people into the political process and instead called for a more extensive review of the nominating process.

The amendments did win enough support to potentially move on to the convention floor for votes next week. But conflict on the floor appeared unlikely. Calling the compromise a “step forward,” Regunberg said they had not filed a so-called minority report to pursue a floor fight on the amendment to abolish superdelegates.

Sanders has been critical of superdelegates during his contentious primary fight with Clinton. His supporters argue that Clinton’s substantial superdelegate lead may have influenced the outcome of the race, although Clinton also led Sanders with pledged delegates. Late in the race, Sanders sought to flip superdelegates, but with little success.

A collection of liberal organizations and Sanders backers held a news conference before the hearing, stressing their opposition to superdelegates. Supporters crowded the conference room where the hearing was held, with more people packed in an outside hallway, cheering and chanting.

With the convention just days away, the hearing was one of the last opportunities for Sanders’ supporters to push their agenda. The party platform debate concluded recently with a draft document that included many of Sanders’ priorities, including proposals for a $15-an-hour federal minimum wage, abolition of the death penalty and steps to break up large Wall Street banks.

The hearing came as the Democratic Party tries to unify for the general election after an acrimonious primary. But the recent release of hacked DNC emails, detailing the split between the DNC and Sanders, may slow that process.