Dems get a filibuster, but Trump will get his Supreme Court nominee 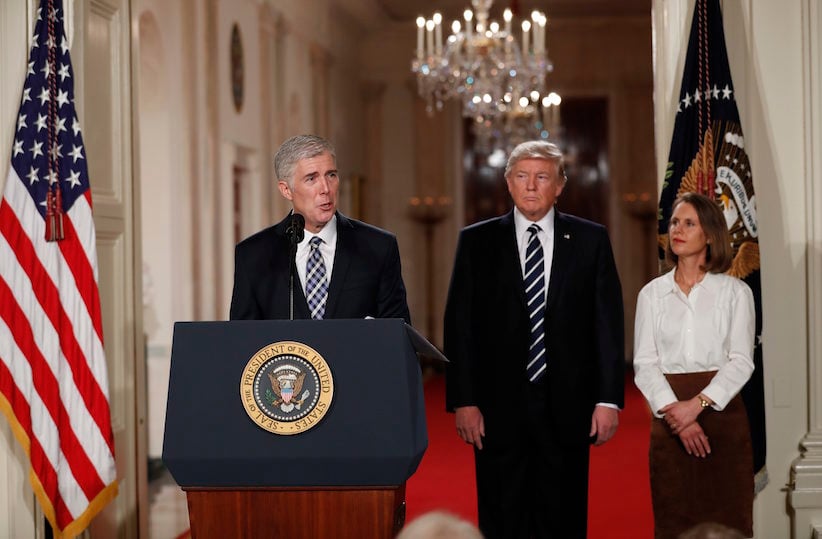 Judge Neil Gorsuch speaks as his wife Louise and President Donald Trump stand with him on stage in East Room of the White House in Washington, Tuesday, Jan. 31, 2017, after the president announced Judge Neil Gorsuch as his nominee for the Supreme Court. (AP Photo/Carolyn Kaster)

WASHINGTON — Democrats claimed the votes they needed Monday to block President Donald Trump’s Supreme Court nominee, but the victory was only fleeting, setting up a historic showdown with Republicans who intend to rewrite Senate rules and muscle Neil Gorsuch onto the high court.

The coming fight was assured as the bitterly divided Judiciary Committee voted 11-9, along party lines, to send Gorsuch’s nomination to the full Senate, where Majority Leader Mitch McConnell of Kentucky has vowed he will be confirmed on Friday.

Short of the 60 votes needed to overcome procedural hurdles, McConnell is ready to lead Republicans in a unilateral voting change so significant in the rules-conscious Congress that it’s been dubbed the “nuclear option,” lowering the confirmation threshold to a filibuster-proof simple majority in the 100-member Senate.

Sen. Chris Coons of Delaware became the key 41st vote for the Democrats Monday, declaring during committee debate that Gorsuch’s conservative record showed an activist approach to the law and that he evaded questions during his confirmation hearings. Coons also said that Republicans’ treatment of former President Barack Obama’s Supreme Court nominee, Merrick Garland, left lasting scars after they denied him so much as a hearing following the death of Justice Antonin Scalia early last year.

“We are at a historic moment in the history of the United States Senate” due to actions by both parties, Coons said. “We have eroded the process for reaching agreement and dishonoured our long traditions of acting above partisanship.”

The long-term consequences of the coming confrontation could be profound, as the rules change Republicans intend to enact would apply to future Supreme Court nominees, too, allowing them to be voted onto the court without any input from the minority party. And though predicting a justice’s votes can be difficult, confirmation of the 49-year-old Gorsuch is expected to restore the conservative majority that existed while Scalia was alive, which could then be in place or even expand over decades to come as some of the more liberal justices age.

For Republicans and Trump, Gorsuch’s confirmation will be a moment of triumph, a bright spot in a troubled young administration that’s failed on the legislative front with the health care bill and is under investigation over Russia connections. The nomination of Gorsuch, by contrast, has won universal praise from Republicans, some of whom call his appointment Trump’s best move so far as president.

Gorsuch has spent more than a decade on the federal appeals bench in Denver where he’s issued consistently conservative rulings, and he appeared on Trump’s list of potential candidates partly generated by the Federalist Society and Heritage Foundation during the campaign.

Gorsuch’s confirmation will also be vindication for McConnell’s strategy of refusing to fill Scalia’s seat last year, instead leaving it open for the next president, even though few imagined then that that person would be Trump.

The showdown over the “nuclear option,” expected on the Senate floor Thursday, is likely to be accompanied by much hand-wringing from senators bemoaning the decay of the chamber’s traditions of bipartisanship and comity.

But both parties are to blame. When the Democrats were in the majority, they removed the 60-vote threshold for lower-court nominees in 2013 when Republicans were blocking Obama picks to a critical federal court. Republicans said then that Democrats would come to regret it.

Gorsuch will be confirmed “and he should be,” the No. 2 Senate Republican, John Cornyn of Texas, said during Monday’s debate. “If Judge Gorsuch is unacceptable to our Democratic colleagues, there will never be a nominee by this president that you will find acceptable. Never.”

Gorsuch now counts 55 supporters in the Senate: the 52 Republicans, along with three moderate Democrats from states Trump won last November — Joe Manchin of West Virginia, Heidi Heitkamp of North Dakota and Joe Donnelly of Indiana. A fourth Senate Democrat, Michael Bennet from Gorsuch’s home state of Colorado, has said he will not join in the filibuster against Gorsuch but has not said how he will vote on final passage.

Democrats claim the Republicans’ treatment of Garland was worse than anything they ever did or are doing, and with Trump in the White House they are under intense pressure from liberal voters to oppose the president on every front. That gives them very little leeway to let Gorsuch onto the court unchallenged, even though all the current justices were confirmed without filibusters, aside from a half-hearted effort against Justice Samuel Alito.

Several Democrats also say Gorsuch has not done enough to demonstrate his independence from Trump at a time when the president has frequently assailed the judiciary and is embroiled in one controversy after another.

“The independence of our judicial branch has never been more threatened or more important,” said Sen. Richard Blumenthal of Connecticut. “The possibility of the Supreme Court needing to enforce a subpoena against the president of the United States is far from idle speculation.”